Antarctic expedition to use drones to collect blue whale poo RV Investigator in Antarctica. This is the ship the scientists will travel on for this expedition. Picture: CSIRO Marine National Facility

A team of drones is heading to Antarctica on what is described as the “the most detailed whale poo expedition ever”.

The drones will help 28 international scientists who leave Hobart, Tasmania, on Saturday bound for the Antarctic to study the effects of blue whale faeces* on biodiversity* and climate change.

The seven-week expedition will follow the daily lives of Antarctic blue whales and Antarctic krill, which the whales eat. Dr Mike Double is a zoologist* and geneticist*. He is also chief scientist of the Australian Marine Mammal Centre and leading this expedition.

“We want to find out if the shape of krill swarms affect the distribution* and behaviour of blue whales, and if the blue whales themselves fertilise the ocean with their poo which grows more algae for krill to eat,” said Dr Double.

The faeces, which is mainly made up of digested krill, initially floats on the surface before dissipating* and then sinking to the ocean floor.

On previous missions, researchers have had to collect samples by hand, but for the first time, drones will be used to do the dirty work. The drones will also take photographs.

VIDEO: To find the blue whales, scientists will use underwater listening equipment. This video is of a previous expedition

Blue whale numbers plunged by 95 per cent in the early 20th century, but they have stabilised and partially recovered since the introduction of a global ban on catches in 1966.

The giant creatures can grow to more than 30m in length and weigh 200 tonnes — more than even the largest dinosaurs. 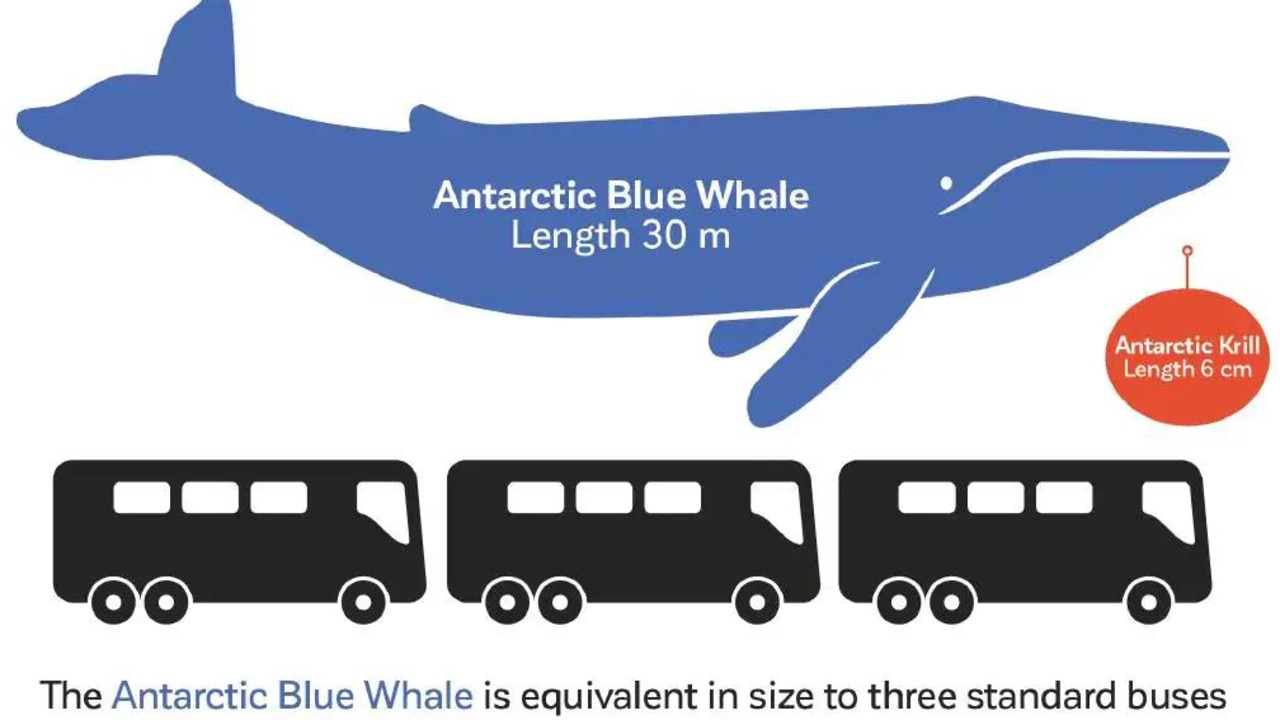 This research will consider how they — and their poo — contribute to nutrition levels in Antarctic waters.

Deputy chief scientist Elanor Bell said they would test the theory that whales fertilised the ocean with iron*, after eating iron-rich krill and excreting* the iron in their faeces.

Iron is important for the growth of microscopic algae known as phytoplankton, which are the foundation of the marine food web around Antarctica. KRILL
Krill is a tiny crustacean* that looks like a prawn.

There are 85 species of krill in the Southern Ocean.

Antarctic krill is one species. Its scientific name is Euphausia superba.

Scientists estimate there are 500 million tonnes of Antarctic krill in the Southern Ocean, which means they have the largest biomass of any multi-cell species on Earth.

In one day, an adult blue whale can eat up to 4 million krill, weighing more than 3 tonnes.

CLASSROOM ACTIVITIES
1. Draw a Food Web
Scientists have hypothesised that whale poo contributes to the marine food web. Use information from the article and possibly from further research to draw a Marine Food Web of Antarctica. (A Food Web is a diagram that shows what different species in an ecosystem feed on and what might feed on them.) Include the species that are listed and possibly other species including other whale species, penguins, seals and sea birds. Draw each species you include in the food web. Next to each drawing write down as many facts as possible about this species. You can find these facts from the article or from further research. For example, next to blue whales you could write: Population between 10,000 and 35,000.

2. Extension
Imagine you were one of the scientists onboard this Antarctic mission. Collecting Whale poo would be one of the things you would be doing to complete this research. What else can you assume you would need to be done to find the answers you were looking for?

Write a list of things you will be studying and how this information is useful.

For example: Mapping and tracking krill swarms and blue whale populations to see if there are links between them.

Once you have your list, work with a partner to make them into flash cards.

Place the flash cards face up between the two of you and create a new story using a fact or topic idea from the article.

See if you can get through all your flash cards.

HAVE YOUR SAY: If you could, would you go on an Antarctic expedition? Why or why not?
No one-word answers. Use full sentences to explain your thinking.