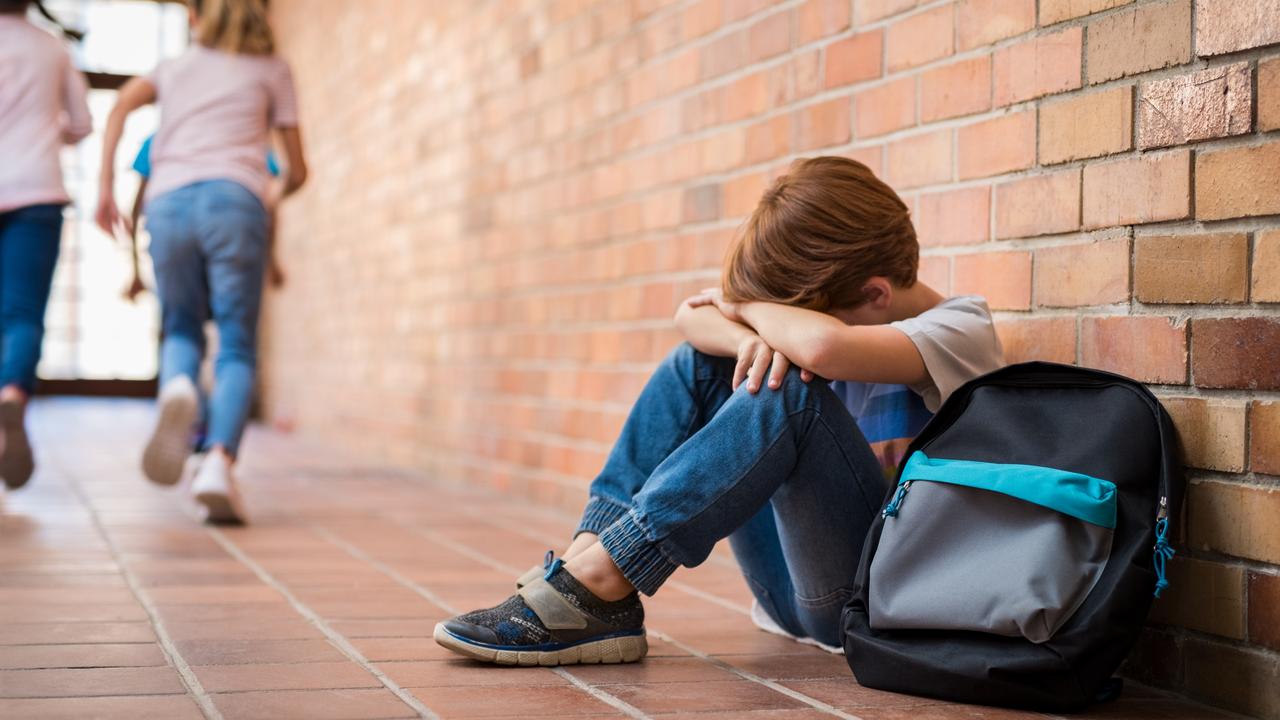 The survey found bullying has increased over the past five years, sparking calls for further investigation into the state of Australia’s schools.

Bullying, intimidation* and cyber-harassment are common in Australian schools, with the problem much worse than in most other countries.

More than a third of Australia’s secondary school principals claimed to receive reports of intimidation or bullying among students at least once a week, with 12 per cent claiming staff were intimidated or verbally* abused with similar regularity.

Across all OECD* countries, 14 per cent of schools reported regular incidents related to intimidation or bullying among students, and 3 per cent reported that teachers were a regular target.

Bullying has increased over the past five years, sparking calls for further investigation into the state of Australia’s schools. The OECD’s Teaching and Learning International Survey, which is ­released every five years, also shined the spotlight on the impact of technology on student safety.

More than 10 per cent of Australian principals claimed to be dealing with a report of a student being subjected to the posting of harmful information online at least weekly, while 16 per cent claimed to receive a report at least weekly about unwanted electronic contact, such as emails or text messages, ­between students. The issue was much more common in Australian schools than those in most other countries, with only England ­reporting a higher rate. Many secondary school principals receive a report at least weekly about unwanted electronic contact, such as emails or text messages, ­between students.

The report points out only a small number of Australian principals completed the survey, which makes it difficult to know how accurate the comparisons with other countries are. But it does regard the Australian results as concerning.

“This is an issue of concern for policymakers*, teachers, principals and parents, given the enduring* impact of intimidation and bullying on the wellbeing, confidence and achievement of students who are victims of it, as well as its potentially* dramatic* consequences,” the report says. “According to principals’ reports, this problem is most prevalent* in Belgium … This phenomenon* might also be a significant issue in Australia.” 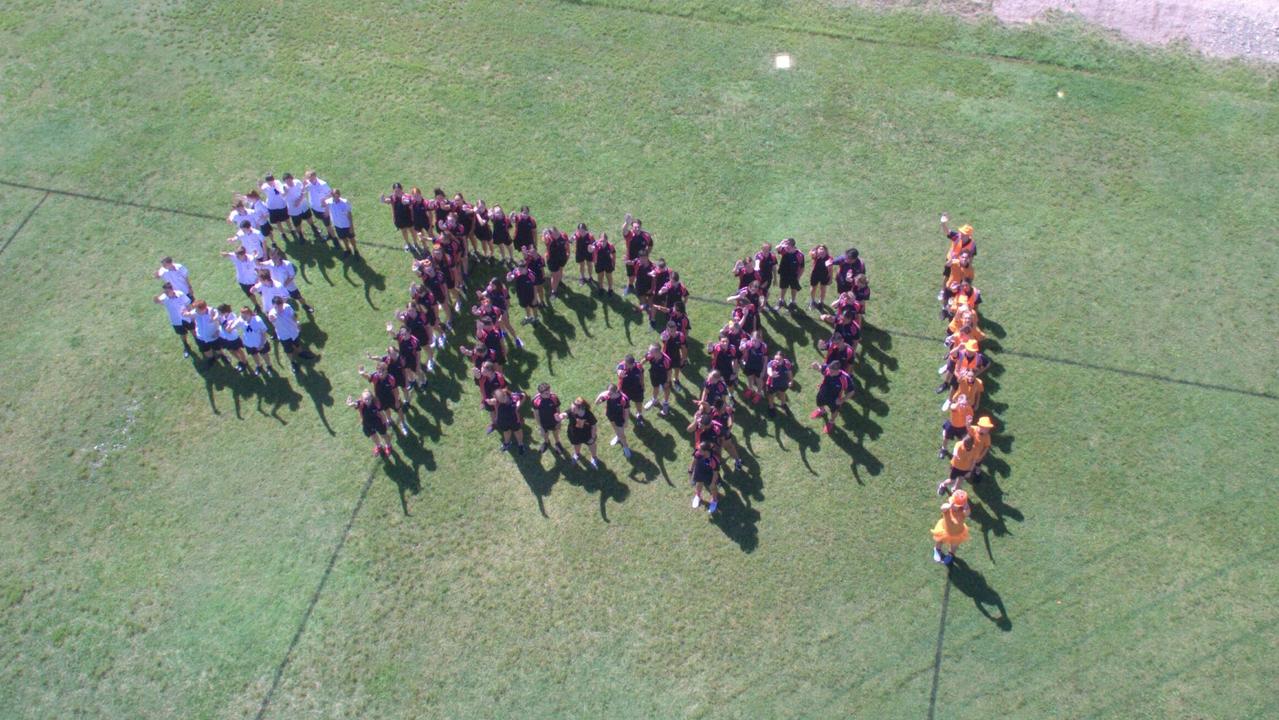 Pimpama State High School Students in Queensland form a human banner demanding that bullying stop, as part of a National Day of Action Against Bullying and Violence.

“I’m not saying it needs a royal commission but it needs to be talked about, investigated and it ­requires a bipartisan* approach,” Mr Presland said, adding that Australia, as a culture, did not typically place a high value on teaching, and had a history of praising those who stood up to authority.

“Kids model their parents’ ­behaviour and, with easy access to technology, the end result of that is what we’re now seeing in schools.”

The international survey, which involved 260,000 staff from 48 countries, also revealed that 29 per cent of Australian teachers surveyed “lose quite a lot of time” due to students disrupting lessons. Jessica from Willows State School in Queensland made a poster for a Say No to Bullying competition.

NEED HELP?
Kids Helpline is a free, 24-hour phone, email or online service for young people who need advice, counselling or just someone to talk to. You can talk to the counsellors about anything and they will not criticise or judge you.

You could also visit bullynoway.gov.au

Australia-first review into phones in schools

Call to ban smartphones in schools

CLASSROOM ACTIVITIES
1. Create a Y chart
Often when we hear news stories about bullying, we focus on what bullying is and what damage it does to the emotional health of the victims. Of course, we should not bully anyone. Of course, it impacts people’s (especially children’s) mental health. We all know this and yet bullying is still common in our schools. Let’s focus on how we SHOULD behave, how we SHOULD treat people!

Create a ‘Y’ chart on your page by drawing a large capital Y. In each section of the Y write one of the following headings LOOKS LIKE, FEELS LIKE and SOUNDS LIKE.

Does it seem like a great place to be?

2. Extension
Every school/classroom can make some improvements to make their learning space a supportive, inclusive and positive place to be.

Think about what you thought the classroom or school would be like in the above activity.

Now write 10 ways that you can help to turn your classroom or school into this sort of space.

For example: ‘Greet all members of my class with a smile or ‘hello’ each day.’

Or ‘Invite people to join in activities with me.’

VCOP ACTIVITY
Physical, verbal and cyber bullying are all very real and common issues in schools. Some people get angry and hit, some hit because it makes them feel more powerful. Other may use their words to hurt people. But all of them are doing it with the intention of hurting someone else and that is bullying … and it needs to stop.

I want you to think about an apple.

Imagine that if you physically hurt someone (maybe you hit them or push them over). When you do this, the skin of the apple gets cut or grazed and you can see the damage.

Now imagine every time you are mean using your words (spoken or written), you drop the apple. The meaner you are, the more the apple bounces on the ground.

The skin might not break, but on the inside the apple is getting more and more bruised, more and more hurt and it doesn’t heal. It’s not always about the wounds on the outside. Their body might heal, but their insides are still very much in pain.

Words are extremely powerful, they can make some feel so proud and happy that they might just float away on a cloud. But they can also hurt someone so much that they want to hide away from the world.

Decide what you can do to help stop cyber bullying. You can make a poster, write a letter or put a new school rule in place.

Whatever you choose, you will need to use emotive language to help you express your feelings.

HAVE YOUR SAY: Do you believe bullying, intimidation and cyber-harassment are a problem in your school? How could the situation be improved?
No one-word answers. Use full sentences to explain your thinking. No comments will be published until approved by editors.