How does Australia rate as a recycling nation? We look at what we do well and where we could improve 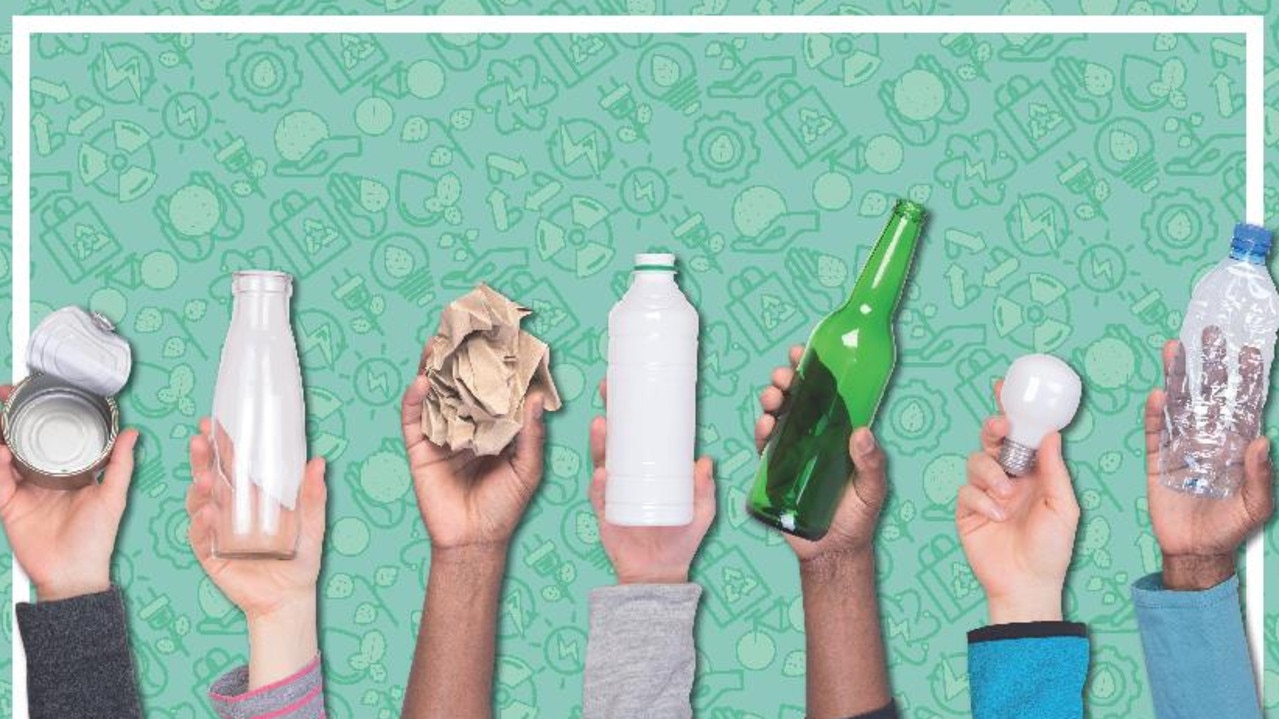 Recycling isn’t a modern idea. In fact, disposable and single-use products and packaging are much newer ideas.

Recycling has been a way of life forever for people who lived from the land — including Aboriginal and Torres Strait Islander peoples in Australia. Everything used came from nature, so when it had served its purpose, it went back into nature.

For the first white settlers to Australia, recycling was a way of making the most of the limited supplies that came from the UK by ship. Linen and cotton rags were used to make new paper and by the 1920s, waste paper and cardboard from households and factories in some cities began to be collected to be recycled into packaging.

Charities have been recycling clothing and household goods for more than 100 years.

Metals such as steel (including car bodies), aluminium and copper have been collected since the early 1900s, melted down and reused. Glass was also collected and broken down and remade into bottles and jars.

Kerbside* collection of recyclables began in the 1980s. Metal such as tins, cans, aerosol cans and foil trays;

Glass bottles and jars; and 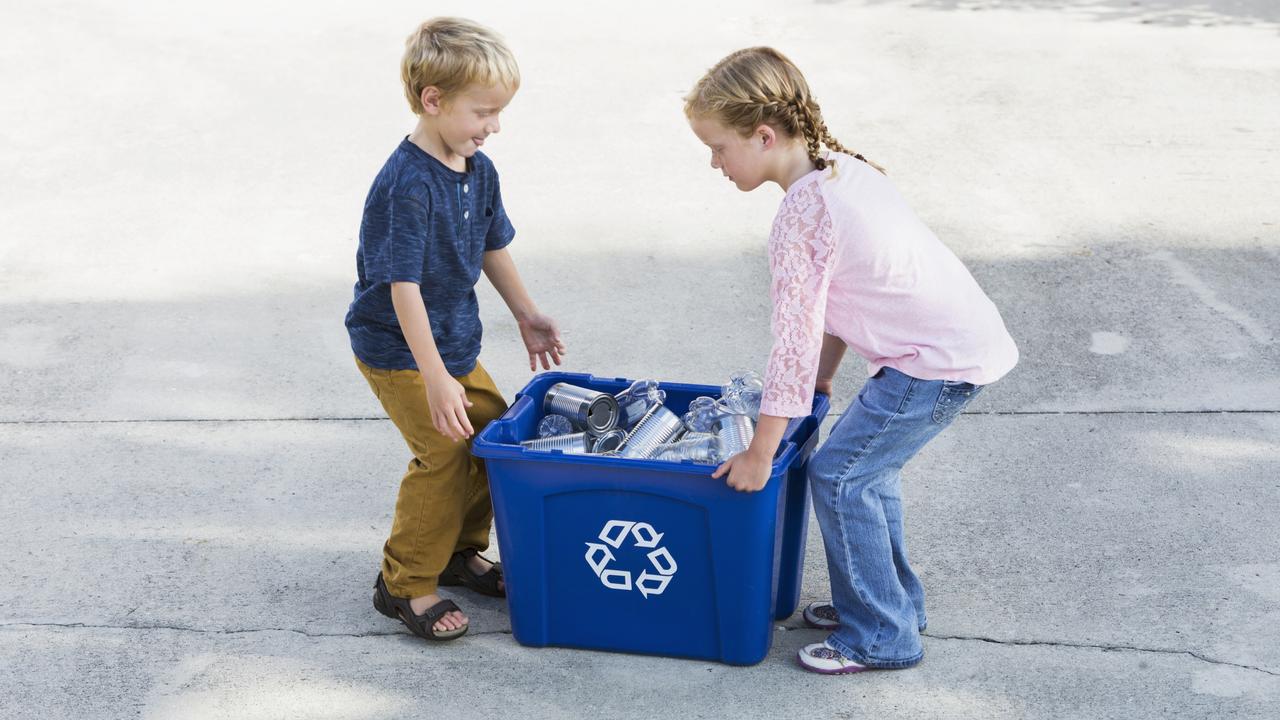 A young girl and her little brother carry a blue recycling bin full of empty bottles and cans to their curb for collection.

WHAT WE CAN’T RECYCLE

Recyclables that can’t go in your recycling bin include plastic shopping bags, soft plastic packaging such as lolly wrappers, polystyrene, batteries, paint, toxic chemicals and e-waste, which is electronic waste such as old computers. 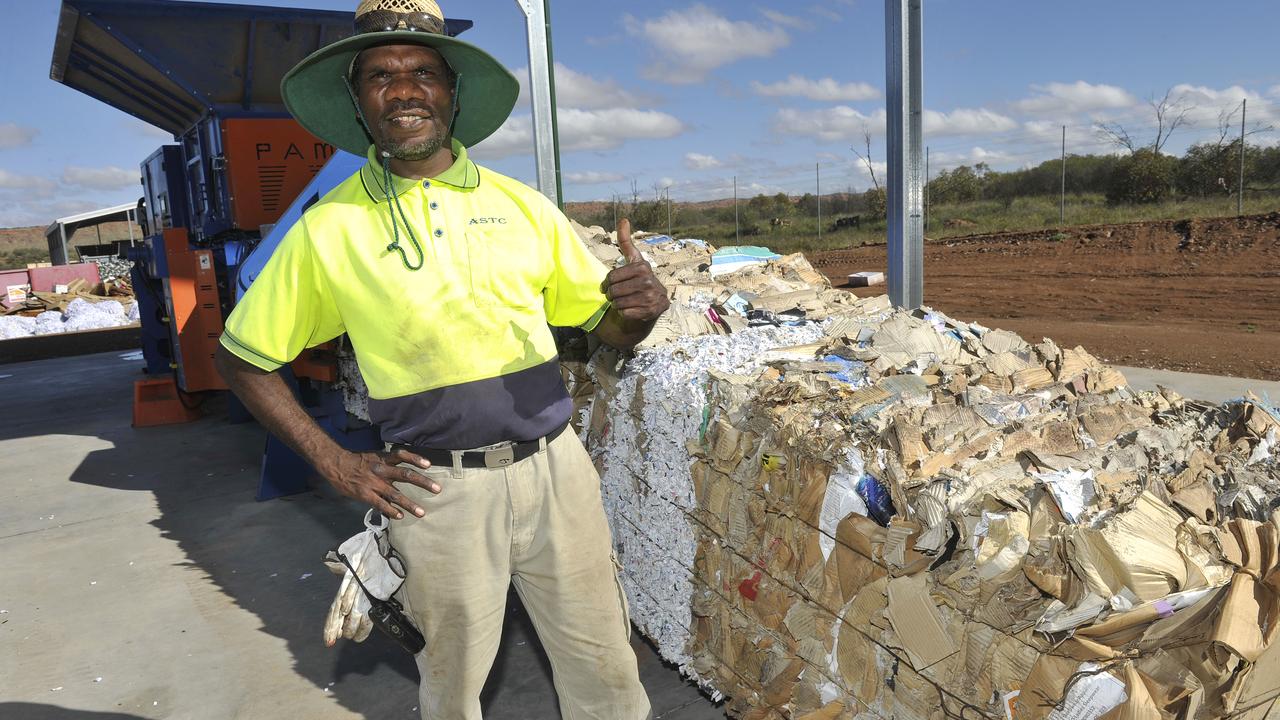 ASTC worker Elwin Lillias at the new waste paper bailer at the tip in Alice Springs.

Educating us all about what can and can’t be recycled is a big challenge. It doesn’t help that there are different rules in different parts of Australia.

Rules about recycling coffee cups are commonly misunderstood. The plastic lids can be recycled but the cups usually can’t and should go in the rubbish. There may be information printed on the cup, so read that.

Plastics bags are tricky. Some councils allow plastic bags to go in recycling bins while in other areas we must take them to special bins outside supermarkets. These bins can also take frozen chip bags, bread bags and lolly bags. Woodville Primary students, Sally Thompson, 12, and Adrian Altus, 11, at the Welland Plaza shopping centre to collect their bench made from soft plastics recycled in the REDcycle program. Coles and Replas are donating the benches to schools around Australia.

Aluminium foil can be recycled but not many people know that. Scrunch the foil up in a ball the size of your fist, or wait until you have enough to make a ball that size, and then it can go in the recycling bin.

Check your local council’s rules so you do the right thing.

WHAT WE DO WELL

According to the Australian Bureau of Statistics, more than 90 per cent of Australian households recycle and more than half of our household waste is recycled.

We are world leaders at newspaper recycling and great at recycling plastic bottles and glass. Though we are pretty good at putting our recyclables in the recycling bin for collection, as a country we aren’t too good at finding a way to complete the process.

Some of our recycling is sold to other countries to be processed. According to information collected by Blue Environment for the Australian government, until recently, Australia sold 3.5 per cent of collected recyclables to China. In 2017 it bought 29 per cent (920,000 tonnes) of paper and 36 per cent (125,000 tonnes) of all collected plastics. In total in 2017, China bought 1.25 million tonnes of recyclables from Australia.

China recently set stricter rules about what condition the recycled goods must be in. Australia’s recycling was too contaminated* to meet China’s rules and it will now not buy 99 per cent of the recycling it once did from Australia.

This has caused big problems for recycling companies in Australia, who are storing the waste in Australia until they can find a solution, such as another country to buy our waste, make it clean enough for China to take, or a way to process and remake it here. If the waste can’t be recycled, eventually waste companies will be forced to send what could be recycled to landfill*.

Part Four: Follow recyclables from the bin back to you

Part Five: Comparing Australian recycling to the rest of the world

kerbside: on the nature strip in front of houses

landfill: rubbish that goes in a big hole in the ground

Department of the Environment and Energy’s Waste and Resource Recovery information, visit environment.gov.au/protection/waste-resource-recovery