Runner Cathy Freeman had the job of lighting the flame at the Sydney Olympics opening ceremony before she went on to win gold in the 400m. Picture: Brett Faulkner

Australia has been lucky enough to host the Summer Olympic Games not once, but twice – first in Melbourne (in 1956) and later in Sydney (in 2000).

Both Games were considered a big success.

Many Australians still have happy memories of the Sydney Olympics.

A highlight was undoubtedly Indigenous sprinter Cathy Freeman, dressed in a futuristic hooded body suit, winning gold in the women’s 400m sprint while the nation held its breath – and then exploded with joy!

When Melbourne won the bid to host the modern Summer Olympics, it was a massive coup* for Australia.

These were the Olympics at which some of Australia’s athletes became legends, including swimmers Dawn Fraser and Murray Rose and sprinters Shirley Strickland and “Golden Girl” Betty Cuthbert (who won an outstanding three gold medals). “Golden Girl” Betty Cuthbert claims gold in the 200m, one of three gold medals she won in Melbourne in 1956.

The record breaking Australian team won so many medals (35, including 13 gold) that Australia ended up coming third on the overall medal table, behind the Soviet Union and the US – still the highest on the table we have ever been!

In total, the Melbourne Olympics saw 3314 athletes from 72 nations taking part in

There were fewer participants than other Games. This was because Australia was remote and because some countries boycotted* the Games to protest against invasions in other parts of the world.

Australia, however, had its biggest team up to that point: 325 athletes. Australian runner Ron Clarke lights the Olympic Flame at the opening ceremony of the 1956 Melbourne Games at the MCG.

Interestingly, the equestrian events were not held in Melbourne or even Australia. They took place in Stockholm, Sweden, because Australia had strict rules about quarantine* for horses.

It was at the closing ceremony of the Melbourne Games that a new tradition was created. All the athletes walked together for the first time (rather than in their country teams) after an Australian schoolboy suggested the idea to the organisers. This is still a much loved Games tradition, symbolising friendship and connection.

In 1956, television was introduced to Australia – just in time for the Olympics – but not everyone had a TV set. Many people watched the Games on TV in places like shopwindow displays or neighbours’ homes. The Sydney Olympics was one of the happiest events in Australian history.

The stunning city of Sydney was showcased* to the world and Australia won more medals than ever before (or since).

We collected 58 medals, including 16 gold, which took us to fourth on the overall medal table, behind the US, Russia and China. Swimmer Ian Thorpe with his 400m freestyle gold medal, one of five medals he won at the Sydney Olympics. Picture: Brett Faulkner

Freeman’s heart-stopping win in the 400m women’s sprint was the pride of the nation, while Thorpe’s size-17 feet propelled him to five medal wins (three gold and two silver) and superstar status. Cathy Freeman crosses the finish line to win the 400m final, cheered on by a jubilant crowd at the Sydney Olympic Games. Picture: AFP

More nations than ever took part: 199. And the most tickets ever were sold: 6.7 million.

In an entry for the local record books, the Australian team had 632 athletes – still the largest team we’ve had.

While not many people around the world had a television during the Melbourne Olympics, by the 2000 Sydney Games things were very different. About 3.7 billion people from 220 countries tuned in to watch the Games on TV.

In the 44 years between the Sydney and Melbourne Games, the number of participants and competitions exploded.

Over the decades, athletes have become faster, higher and stronger, and this can be seen in the event results.

It’s an image from the Sydney Olympics that many Australians will never forget.

To mark their victory, the four Australian swimmers played air guitars, which is when you pretend to play a guitar.

The cheeky moment was a response to one of the American swimmers, who had earlier said the Americans wanted to smash the Aussies “like guitars”.

Well, the Americans didn’t win and the Aussies had the last laugh! 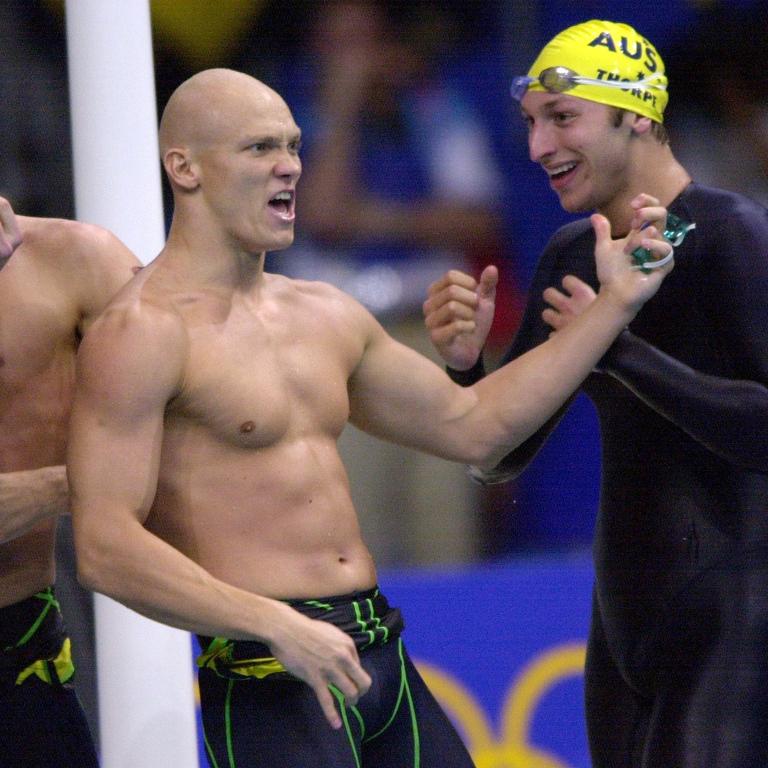 Australian swimmer Michael Klim plays air guitar after teammate Ian Thorpe swam the final leg in the 4x100m freestyle relay to bring home gold for the Aussies ahead of the US team. Picture: Darren England/ALLSPORT

Australia will hold the Olympics for the third time when Brisbane hosts the Games in 2032.

Other countries, including Qatar, Hungary and China, were interested in hosting the 2032 Games. But, after proceeding through various bidding stages, Brisbane was the only city being considered by the International Olympic Committee, which chooses the host.

A vote by IOC members in Tokyo on July 21 confirmed Brisbane as the host city for the 2032 Olympic Games.