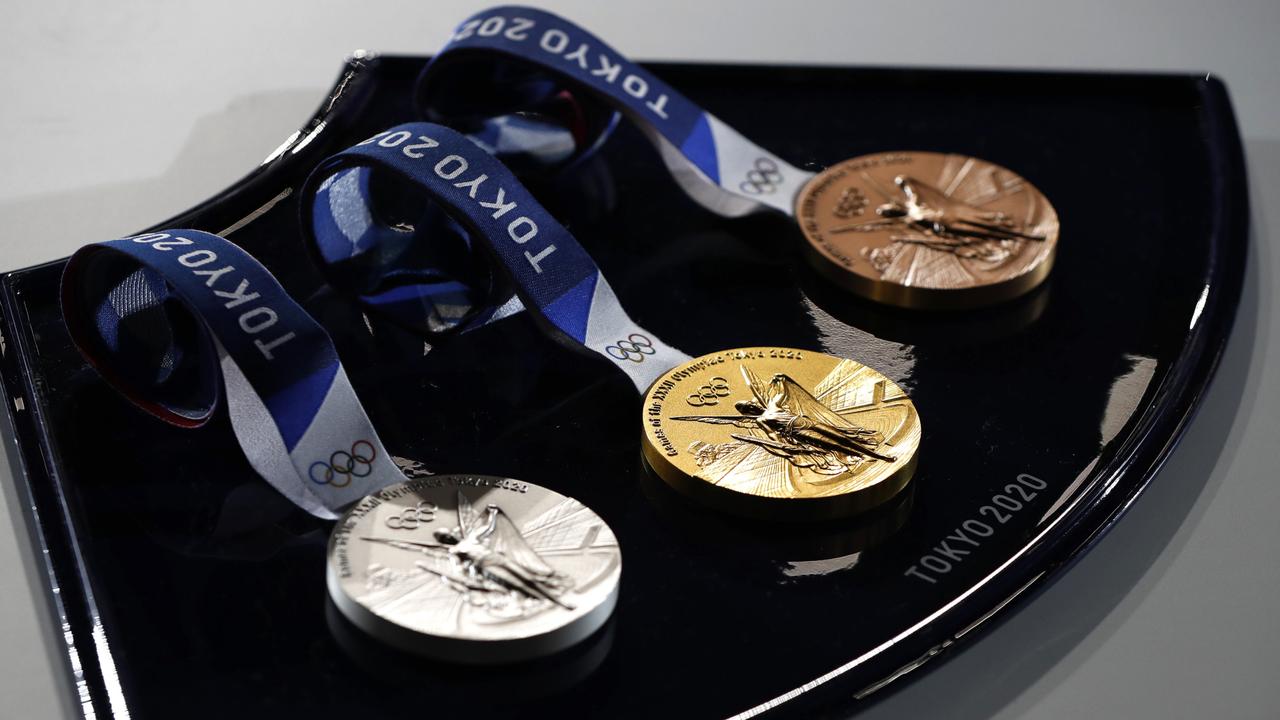 Metals were recycled from old electronic items donated by the people of Japan to make the Olympic medals for the Tokyo Games. Picture: Getty Images

Olympic athletes are rewarded for their sporting prowess* with gold, silver and bronze medals.

Gold is given to the person who comes first, silver to the second, and bronze to the third.

Winning a medal is not only a hugely exciting moment for the athlete, but also for people living in the athlete’s country – people at home watching the Games feel very proud!

The medals are all extremely difficult to win but, of course, the gold is the most difficult. Winning a gold medal means you are the very best in your sport in the world at that time.

An athlete who wins a gold medal often becomes a superstar and role model for people in their own country. Sometimes, when they win lots of medals, they become a celebrity across the world, such as American swimmer Michael Phelps and Jamaican sprinter Usain Bolt. Jamaican sprinter Usain Bolt became a global super star of the track during a career that saw him win eight Olympic gold medals, including here in the men’s 100m final at the Rio Olympics in 2016. Picture: AAP

To receive their medals, athletes step on to a podium.

The winner takes the centre spot, on the highest step, flanked by the athletes who came second and third on the lower steps.

The medals hang from ribbons, which are placed around the athletes’ necks.

The national flags of the three winners are hoisted* and the national anthem of the Olympic champion is played. For many people watching, this is a very moving ceremony. 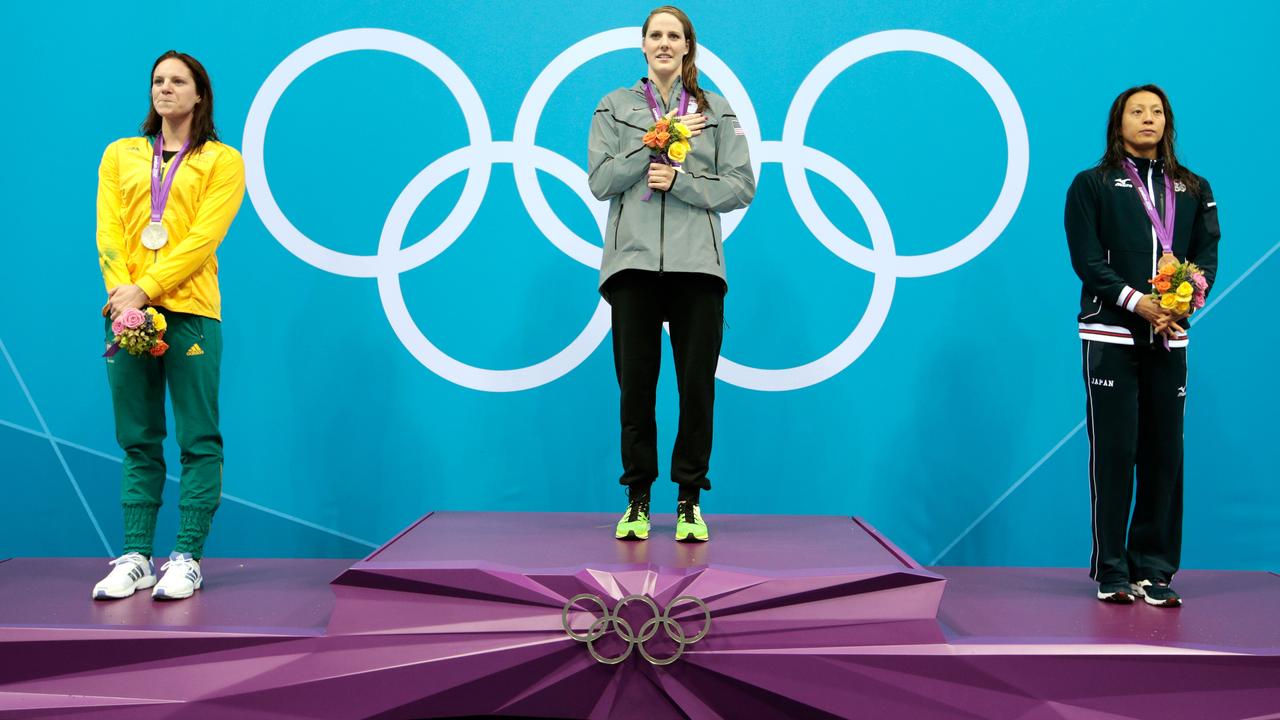 Australian swimmer Emily Seebohm stands in the silver medal position on the podium at the London Olympics in 2012. Missy Franklin, of the US, receives gold and Japan’s Aya Terakawa receives bronze for the 100m backstroke. Picture: Getty Images

The first eight competitors in each Olympic event receive a diploma* and have their names read out. Only the first three also receive a medal.

At the ancient Olympics and other Panhellenic (all-Greek) Games, winners were given wreaths of leaves to wear around their head.

In 1904, at the St Louis Summer Games in the US, gold, silver and bronze medals were given for the first time.

Over the years, the picture designs on the medals have changed, although they were very similar from 1928 to 2000.

The gold medals are not actually solid gold! They are made from pure silver but must also have at least 6g of gold plating.

The silver medals are pure silver. The bronze medals are red brass (which is mostly copper).

The 5000 medals of the postponed Tokyo 2020 Summer Games and Paralympics are the first in Olympics history to be entirely created from recycled metals.

The medals have been made from more than six million old mobile phones, plus old digital cameras, laptops and handheld games, all donated by the Japanese people.

Many electronics contain precious metals like gold, silver and copper – the same metals needed to make the medals. The silver, gold and bronze medals of the Tokyo Games are the first Olympic medals to be made entirely from recycled metals. Picture: Getty Images

One side of the Tokyo Summer Games medal shows Nike, the Ancient Greek goddess of victory, in front of Athens’ Panathinaikos Stadium, with the Acropolis in the background.

The other side depicts the chequered circle of the Games emblem and the famous five Olympic rings.

For the Paralympics, the medals include the image of a traditional Japanese hand fan on both sides.

The Paralympics medals have indents on their sides (one for gold, two for silver and three for bronze), and Tokyo 2020 spelled out in braille*, which allows athletes with a visual impairment to identify the medals by touch. 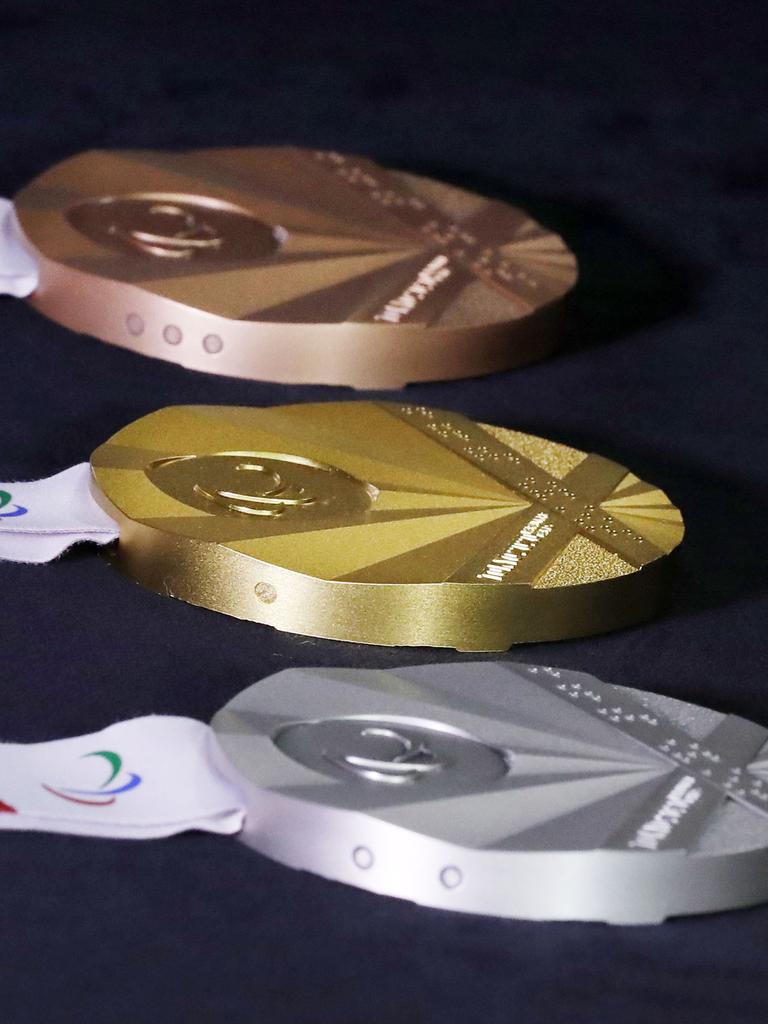 The Tokyo Paralympics medals feature braille and indents on the side. Picture: Getty Images

WHO HAS WON THE MOST OLYMPIC MEDALS?

American swimmer Michael Phelps has won the most Olympic medals in history.

His tally* is 23 gold medals, which is the most Olympic gold medals anyone has ever won, plus three silver and two bronze. US swimmer Michael Phelps kisses one of his 23 Olympic gold medals that have made him the most successful Olympian in history. Picture: AFP