An actor recreates the ancient lighting of the Olympic flame at the Temple of Hera in Olympia before the torch and flame made their way to the Rio Olympic Games in 2016. Picture: AFP

The modern Olympic Games have been around for 125 years, but you have to look back much further than that to understand how the Olympic tradition began.

The Olympic Games date back at least 2800 years to the Olympia region of Ancient Greece, which is where the name “Olympics” comes from.

Sports competitions and cultural events were held at Olympia, a sacred* site in western Greece, every four years. This four-year period became known as an Olympiad.

While it is not known exactly when the Games began, the first written description of them is from 776BC. They were held at Olympia until at least 393AD – almost 1200 years.

The Games at Olympia led to Games at three other locations – Delphi, the Isthmus of Corinth and Nemea – which together were known as the Panhellenic Games. The remains of the athletes’ entrance to first Olympic Games stadium in Olympia, Greece.

WHY WERE THE GAMES HELD?

The Games brought the people of Ancient Greece together to compete in and cheer on sporting events, at a time when Greece was a series of separate communities that did not always get along with each other or neighbouring countries.

But it was also a religious festival, run to honour Greek gods.

Zeus, the king of gods, was honoured at the Games at Olympia, which were considered the most important of the Panhellenic Games.

Zeus is said to have lived in Olympia around 1200BC, and so the site, which featured an altar* to Zeus, was hugely sacred to the Ancient Greeks.

All the sporting action took place within the sanctuary* of Olympia for the first 250-plus years, with a sacred olive tree of Zeus marking the finish line for all races.

WHO COMPETED AT THE GAMES?

The Games were open to all free Greek males, from farm workers to royalty, but most competitors were soldiers. All competed naked.

The winners received victory wreaths, cut from the olive tree of Zeus. Unlike the modern Games, which reward first, second and third placegetters, there was only one winner at the ancient Games.

Women, along with slaves and foreigners, were not allowed to compete. Women were also banned from attending as spectators. Barefooted athletes run a 100m race in a 2008 recreation of the ancient Games at Nemea. Picture: AFP

WHAT EVENTS WERE HELD?

The ancient Games started off as a one-day event but were extended to three days from 684BC. By the fifth century BC, the Games lasted five days and included running, jumping and throwing events, along with chariot racing, boxing, wrestling and pankration, which was a brutal combination of wrestling and boxing with almost no rules. A marble statue of two pankration competitors locked in battle. 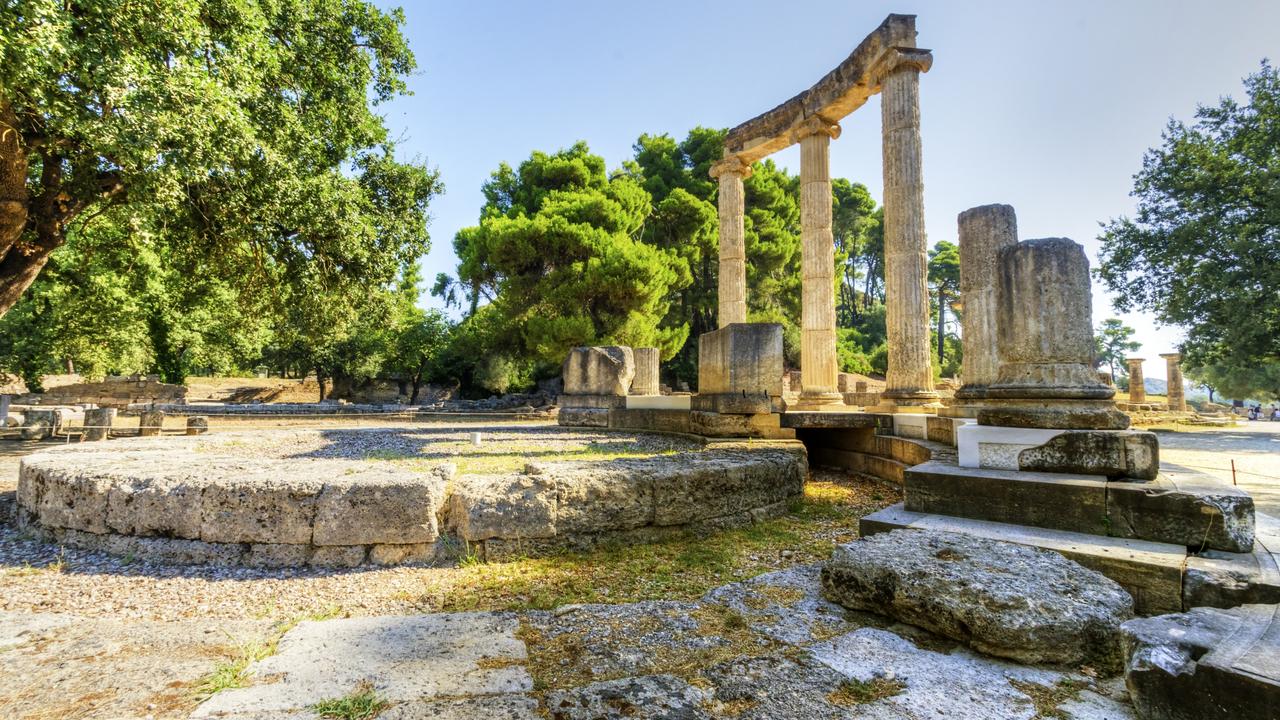 Ruins of the ancient site of Olympia, where the ancient Olympic Games were held for almost 1200 years.

WHAT ABOUT THE SPECTATORS?

While the first stadium was pretty simple, making use of the slopes of the surrounding hills, the discovery of 150 wells from this time shows that even these early Games attracted large crowds of spectators.

Four later versions of the stadium increased the capacity and comfort for crowds. At least 40,000 spectators would have packed the stadium each day at the height of the ancient Games’ popularity. A model of Ancient Olympia village, the site of the Olympic Games. Picture: AAP Photo/Greek Ministry of Culture