Cartoonist Mark Knight says Shane Warne should be remembered as one of the greats of Australian cricket, up there with Sir Donald Bradman.

When the news broke that Australia’s most famous living cricketer, Shane Warne, had passed away, there was shock and disbelief around the world.

Cricket holds a special place in Australia: not only is it our national sport, but it is an international game. Whether it’s an Ashes series against England, the Boxing Day Test, a series against India, a World Cup Final against our Kiwi neighbours or a T20 match facing the Sri Lankans, Australians love their cricket, especially when they take on the world’s best.

And they worship their cricketers, from Sir Donald Bradman in the 1930s and ’40s to our current crop of Steve Smith, Pat Cummins, Ellyse Perry and Meg Lanning.

Shane Warne held a special place in the hearts of cricket fans all around the world. Even if you weren’t a follower of the game you knew about Warnie. Shane Warne was known around the world for his spin bowling skills and his larrikin streak. Picture: Getty Images

He changed the game of cricket with his ability as a spin bowler to befuddle* batsmen and turn a match. His famous “Gatting ball”, where he bowled English batsman Mike Gatting with his first ball of his first Ashes Test against England in 1993, is known as the ball of the century. It was pitched one way, then completely changed direction when it hit the ground, went around the batsman and took out the off-stump.

It heralded* the era* of Shane Warne and leg-spin bowling.

The rest is history. He went on to claim 708 Test wickets, win a world cup and numerous awards, and when he retired he became a respected commentator. Of Course, Warne had that Australian larrikin* streak in him and he always seemed to be in the media spotlight, sometimes for the wrong reasons. He was never dull, a cartoonist’s dream in fact!

I had caricatured him numerous times over the years. Sadly, now he was gone at 52-years-old and I had the job of paying tribute to him somehow in a cartoon for the newspaper. Occasionally I draw cartoons that are not meant to be funny, but are a commemoration* of a person’s life.

With a life as full as Shane Warne’s, it was a daunting* task. How do you sum up a bloke like Warnie in one cartoon?

I thought the best way to pay tribute to him was at the greatest cricket stadium in the world, the MCG. 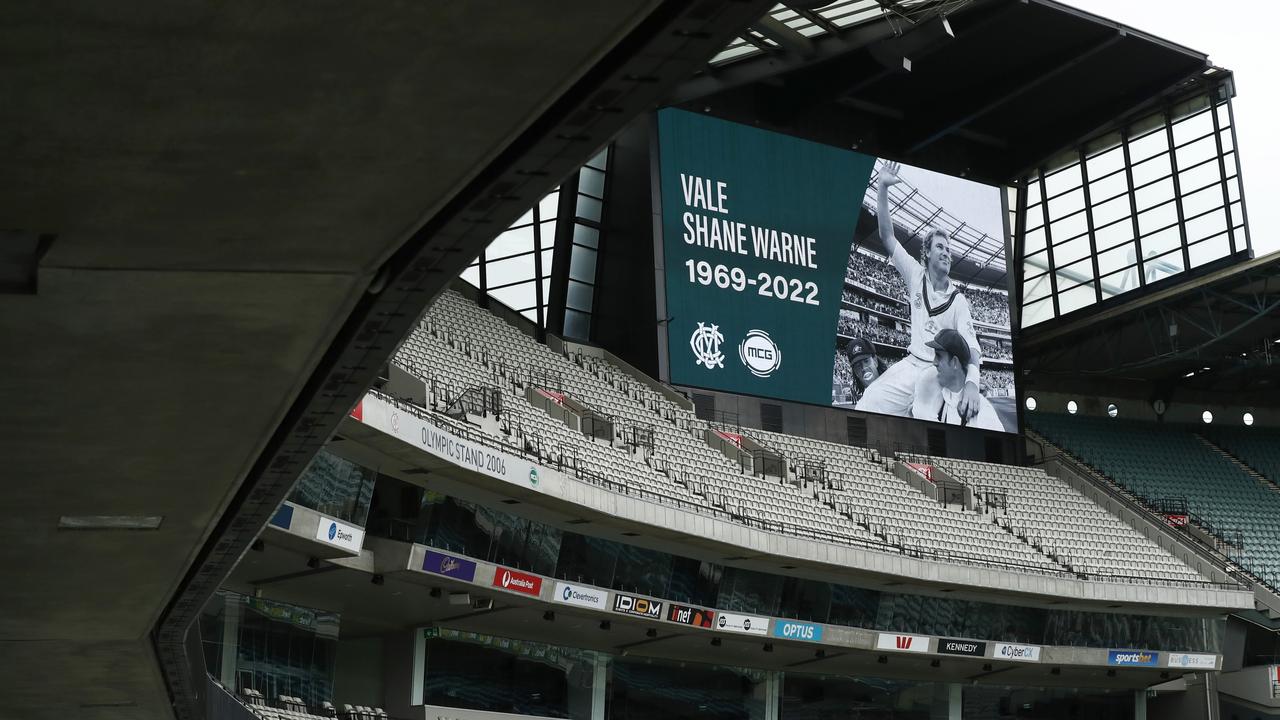 The MCG scoreboard paid tribute to Shane Warne on March 5 after news of his death broke. Picture: Getty Images

As I started sketching the ground, the news came through that the Victorian Government would rename the Great Southern Stand the SK Warne Stand. I drew the huge sweeping grandstand with the intention of the spirit of Shane Warne walking off the ground one last time.

I reconsidered and felt he should be up in the stand itself, looking out over the structure that would bear his name as a lasting tribute.

I also wanted the cartoon to illustrate Warne’s position as one of our game’s greatest exponents*. Sir Donald Bradman holds the mantle* as our greatest. He was a batsman. Now we have a bowler. Who could split those two for top honours? So the cartoon shows Shane Warne looking out over the “G”. Next to him, a seated Sir Donald Bradman looks back and gives Warne a reassuring nod on his arrival and upon taking his place in cricketing history.

Sir Don holds his bat and Warne holds a cricket ball. Viewers of the cartoon will note a small reference to Warnie’s larrikin side: in his left hand down by his side he discreetly* holds a cigarette.

He always was a rule breaker.

Acting legend at one with the land

No shortcuts for Sir Tom, a hero of the pandemic

Using your sentences to help you, write a caption for the cartoon or some thought bubbles or quotes from one of the people in the cartoon that will make Mark’s meaning clearer for those who haven’t been reading the news this week.