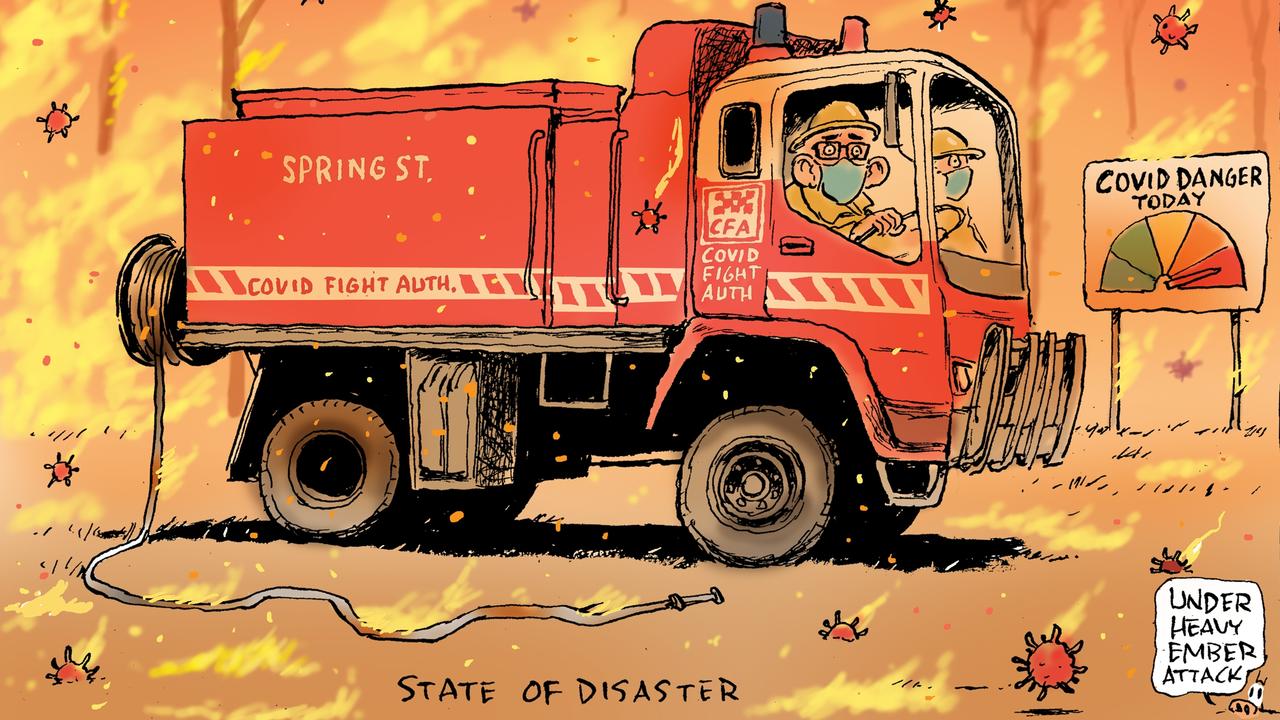 Victoria, once the sporting capital of Australia, is now unfortunately the capital of the coronavirus fight.

Face masks became compulsory throughout the state as COVID-19 infections rapidly increased. The virus spread to aged care homes where, tragically, we have seen a mounting death toll. Then this week it came to a point where intervention* in the form of a six-week Stage 4 hard lockdown for Melbourne was announced and a state of disaster was declared in Victoria.

When considering a cartoon on the subject I recalled the last time a state of disaster in Victoria had been called and it was during the bushfires earlier this year.

Seems like a long time ago now but I remember the public feeling under siege* by this destructive force of nature, lives turned upside down and a sense of uncertainty. A lot like what Victorians are experiencing now.

I felt the image of the out-of-control bushfire was a good metaphor* for the second-wave outbreak of COVID-19 in the southern state.

Bushfires create their own perfect environment with the heat and wind created drying out the bush ahead. Burning embers* from the fire spread forward, creating new spot fires, not unlike new infections of the virus spread by droplets due to breathing and coughing. They both build upon themselves.

My drawing was coming together in my head but what I needed was an image in the cartoon that would be the central focus.

During bushfire season in Australia our focus is always on our country fire fighting organisations such as the RFS in NSW and the CFA in Victoria. They are the brave men and women who volunteer to protect the community when disaster strikes.

Fire trucks have always been a love of mine to draw since childhood, so I pictured a red Country Fire Authority fire tanker in the middle of a huge blaze. However, the CFA on the side of the truck stood for COVID FIGHTING AUTHORITY and behind the wheel was beleaguered* Victorian Premier Dan Andrews in his fire helmet, protective face mask and overalls.

Just like in a bushfire, embers are raining down, but they are not burning leaves but smouldering coronavirus particles, those spiky little spherical* cells we see constantly moving around behind news readers as they deliver the evening TV news bulletin. In the cartoon it is raining coronavirus molecules.

To complete the picture of a COVID-19-bushfire state of disaster, I needed to add that piece of roadside signage that every Australian is familiar with and that was a bushfire danger rating sign. In this cartoon the needle was pointing to extreme. In a cartoon like this, using a visual metaphor such as a bushfire helps to describe another issue we may not have much understanding about.

This coronavirus is a new phenomenon*, we’ve never seen anything like it. Every day we are learning new things about how it develops and how we can prevent it. But we know bushfires, and we’ve seen how they act and what they can do. By using a familiar metaphor like a bushfire I am attempting to show my readers what we may be up against.

It will be a tough battle. But just like bushfires, if Australians band together, support our frontline emergency men and women, we can beat this.

CLASSROOM ACTIVITIES
1. What Happens Next?
Imagine this cartoon is part of a story that is made up of three cartoons. Think about what the story could be and draw the other two cartoons that tell the whole story.

HAVE YOUR SAY: Which parts of this cartoon do you like or would change?
No one-word answers. Use full sentences to explain your thinking. No comments will be published until approved by editors.