THE rejuvenation* of a South Australian Outback icon has landed two well-intentioned country pub owners in a spot of hot water with the law.

The 4.2km tall Marree Man geoglyph* was first discovered on June 26, 1998 on native land near the small desert town of Marree.

The huge drawing was carved into the land and appears to show an indigenous man hunting with a large stick or boomerang. No one knows who put it there. Mr Turner at the site of the Marree Man. Picture: Tom Huntley

Over the years the mysterious figure saw tourists flock to the site, bolstering* local business.

But by 2010 the form became near impossible to spot from the air and last year it disappeared from Google Maps entirely.

Mr Turner said last year the work was necessary to kickstart the area’s flagging* tourism industry and said he thought the work was widely supported.

“I haven’t spoken to anyone in this area, including the indigenous people, the pastoralists* or other business people who wouldn’t support it — they want it,” he said.

“I don’t know of anything that’s captured people’s imagination as much as this formation in the land.”

Work to repair the geoglyph was completed over five days in August last year.

But the Department of Environment is now investigating the work by the two men, nine months after a complaint was made.

The department refused to comment on why the investigation was taking so long, saying only that it was “ongoing”.

“The department should be partnering with land owners to improve our environment rather than spending thousands of taxpayers’ dollars on a witch hunt*,” he said.

Mr Wright and Mr Turner refused to comment while the investigation was ongoing, but have stressed they acted only after receiving permission from the Arabana Aboriginal Corporation, the area’s native title holders.

Australian entrepreneur Dick Smith, who has donated money to build an airstrip at Marree, said the restoration of the famous geoglyph was a “minor issue” and not worth investigating.

“It’s a nothing. They shouldn’t be wasting their money on this,” he said.

“They should be concentrating their resources on real environmental concerns. All the pub owners were doing is reconditioning the real Marree Man, to say they were damaging native vegetation is ridiculous.” 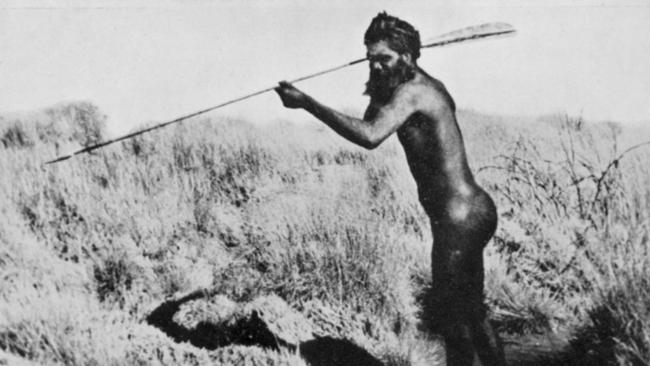 A photo of a man using spear while hunting, believed to be one of several that inspired the creation of the Marree Man.

pastoralists: farmers
restoration: change something back to how it was
witch hunt: campaign against something

What do you think about the rejuvenation of the Marree Man?
Write a letter to the editor, explaining why you do or do not support the actions of the pub owners in restoring the geoglyph.

How the Marree Man came to be part of the landscape remains a mystery.
Explain how you think it happened.
Who or what put it there and how did they manage to do it without anyone seeing?

Geoglyphs can be found in many locations around the world.
Research three other significant geoglyphs.
Draw a sketch of each one and write a short description, including the location.

If you were to create a geoglyph in your local area, what would it be?
Draw a sketch and explain your choice.

ARE YOU GAME TO EAT ROO MEAT?