Police roadblock in the way of Premier’s getaway 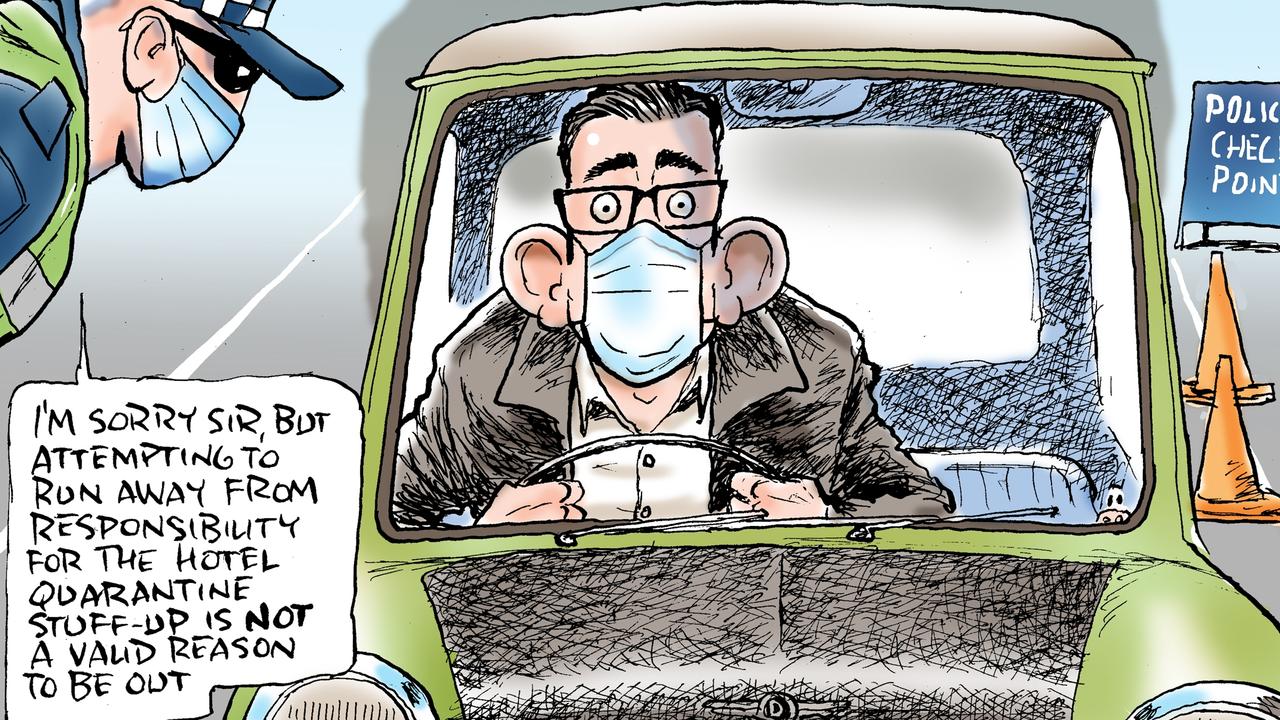 Just when we thought we were on our way out of the coronavirus and life returning to something resembling* normal, the wheels fell off big time in Victoria.

COVID-19 community transmitted cases started increasing dramatically and soon it was learned that the outbreaks were coming from returned overseas travellers’ hotel quarantine sites in Melbourne. We learned that security guards on these crucially* important infection control centres were poorly trained and behaved unprofessionally.

Astoundingly*, we were told that not all returned travellers were tested for the virus, with 30 per cent of them refusing the test.

From there the virus escaped to high-rise public housing in North Melbourne and Flemington and we witnessed people forced to stay in their tiny apartments under a hard lockdown, this time enforced by police.

With the virus out and about in Victoria and spreading, the rest of Australia started closing their borders to “personae non gratae*” Victorians.

First it was NSW then South Australia shut the gate. Victoria was isolated!

In a bid to get things back under control the Victorian government closed off the Melbourne metropolitan area from the rest of the state and went back to stage 3 restrictions. Businesses like pubs, restaurants, gyms, theatres all had to close again.

Police put up roadblocks to stop people moving about and big fines for breaching* the new restrictions were handed out. Seems like the second wave was upon us.

Being a political cartoonist, people say to me, “You’ve got so much material to work with, it must be great!”

True, but with the coronavirus things change so quickly, events move on rapidly so I have to be following things very closely. And there are not many laughs in a viral* pandemic!

The second wave in Victoria was the big story so I turned my mind to it. I thought about how tough the Premier Dan Andrews had been on Victorians during the first stages of the virus earlier in the year. He was harder on restrictions than any other state. Vics couldn’t play golf, go fishing or even visit their mums on Mother’s Day!

And now Victoria was the worst performing state due to a haphazard* approach to hotel quarantine.

The Premier’s response was to send it off to an inquiry in September. He also blamed the rise in infections on the public for becoming lax* in social distancing and safe behaviour.

As leader, I felt he was ducking responsibility or “blame shifting” on this one. He has a very tough job in these trying times, but this was a major malfunction* and I felt the need to comment in my cartoon.

My idea was to draw Mr Andrews trying to escape responsibility at a time when, ironically*, the police were ordered to prevent peoples’ movement. Then the image came to me of the Premier attempting to get as far away as he could from the troubling issue but running into a police roadblock. So the drawing took shape with the Premier in his car stopped at a roadblock and a policeman saying to him that his reason for being out (running away from responsibility) is unfortunately not a valid one! I like to combine a number of issues into one cartoon if I can. It gives the cartoon more depth and helps explain complex political situations.

Here we have combined police roadblocks with the political issue of responsibility for the hotel quarantine failure. This is called conflation, the forcing of two issues into one. Getting used to our strange ‘new normal’

CLASSROOM ACTIVITIES
1. What Happens Next?
Imagine this cartoon is part of a story that is made up of three cartoons. The three cartoons tell a complete story, and Mark’s cartoon is the start of the story. Think about what the story could be and draw the other two cartoons that tell the story, either before or after this one.

HAVE YOUR SAY: What news would you like to draw a cartoon about? Why?
No one-word answers. Use full sentences to explain your thinking. No comments will be published until approved by editors.