The first major archaeological* dig in 100 years at the site of one of Australia’s biggest military defeats has turned up a “missing” British tank.

By 1917, World War I had been raging across Europe for three years and the northern French village of Bullecourt was a battle ground for allied troops, including Australia, and German forces.

British tanks were deployed to help the Aussies but some of them went missing in the hard battles, leading some soldiers and historians to believe a few tanks had driven away in fear and abandoned the Australians. Australians during the battle for Bullecourt. Picture: Australian War Memorial

But a century later the British Ministry of Defence (MoD) backed team of British and Australian archaeologists and volunteers have unearthed* tank armour plates with original racing green paint work, bits of track, its six pounder shells and other metal objects belonging to “Tank 796”.

The French Government had issued a permit for the first dig of an Anzac battlefield to solve the mystery of the fate of the dozen British tanks.

Head of the expedition* and MoD’s chief archaeologist Richard Osgood said the tank find was testament to the brilliant trench* maps the Australian troops had sketched on at the time, copies of which he secured from the Australian War Memorial for the mission. 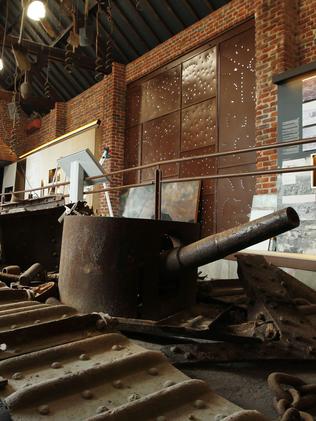 He said the find was very exciting and did show that far from claims the British left Australian Diggers to fight alone, the tanks had been engaged in battle but were not fit for the campaign.

He confirmed the tanks were training tanks with minimal and light armour and were prone* to breaking down.

“The story had always been it had broken down near a shell crater so we found that and a couple of German soldiers underneath it which we think were machine gunners who had used the tank after it had been knocked out,�� Mr Osgood said.

In terms of whether they were effective, Mr Osgood said further digs would be required.

“We’ll need to find more of these tanks so we can answer that but what we have done is effectively shown we can find the final resting place of these things.

“If you read some of the Australian diaries at the time there were varying accounts as to whether it was cowardice* or whether they could have done more.

“This (tank 796) was genuinely destroyed you could see it was, out of the 11 tanks on the battlefield nine were destroyed, so you can’t be too critical of the crews.

The tank parts are to be displayed in a barn by the French farmer who owns the land in which they were found.

Permission is being sought for further digs. Men in the trenches at Bullecourt. Photo: Australian War Memorial

archaeological: to do with the study of history and prehistory through excavation

unearthed: uncovered from the ground

In your own words, explain what this article is about.
Make sure you include the 5 Ws (who, what, where, when, why) in your explanation.

How has this find helped to clarify events that took place in World War I?

What does this tell you about the importance of studying history?

Where are the tank parts going to be displayed? Do you think this is the best place for them? Why/why not?

What do the following words mean in the context of this article?

Australian and British troops were involved in a major military campaign at Bullecourt in France with thousands dying and thousands more being injured.
Unfortunately, when the tanks did not obviously help the Australian troops, people started to believe that they had been abandoned and that the British tank soldiers were cowards.
We now know that this was not the case.

Imagine you were a soldier serving at Bullecourt. How would you feel thinking that you had been abandoned, without the support of the tanks?

How might you have felt if you had known the truth at the time, that the tanks had broken down and the soldiers had been killed?

A statue of one of our diggers is located in Bullecourt to commemorate the service of the Australian soldiers.
Tank 796 has now been found.

Write a plaque that could be displayed with the tanks, thanking the British troops for their involvement in this battle.

Play with a partner or in a small group.

Set a timer to three minutes.
Create as many words as possible from the letters in the word ‘archaeological’ in the three minutes.

Tip: You might wish to write the letters into small squares so you can move them around.

Extension:
Choose another big word from the article and play again!