Long adored as the world’s most iconic* tower, the Eiffel Tower has had a later year growth spurt. The tower shot up six metres last week, after vertigo*-defying* engineers fitted a new radio antenna on top of the Paris monument with the aid of a helicopter.

The tallest building in Paris, known affectionately as the Iron Lady, now measures 330m in height after the new addition. A gathering of tourists along the famed Trocadero esplanade* watched as the antenna was lowered into position on the morning of March 15, with two engineers* barely visible from the ground as they secured the extension to the structure.

The new antenna will be used to transmit digital radio for the capital region. 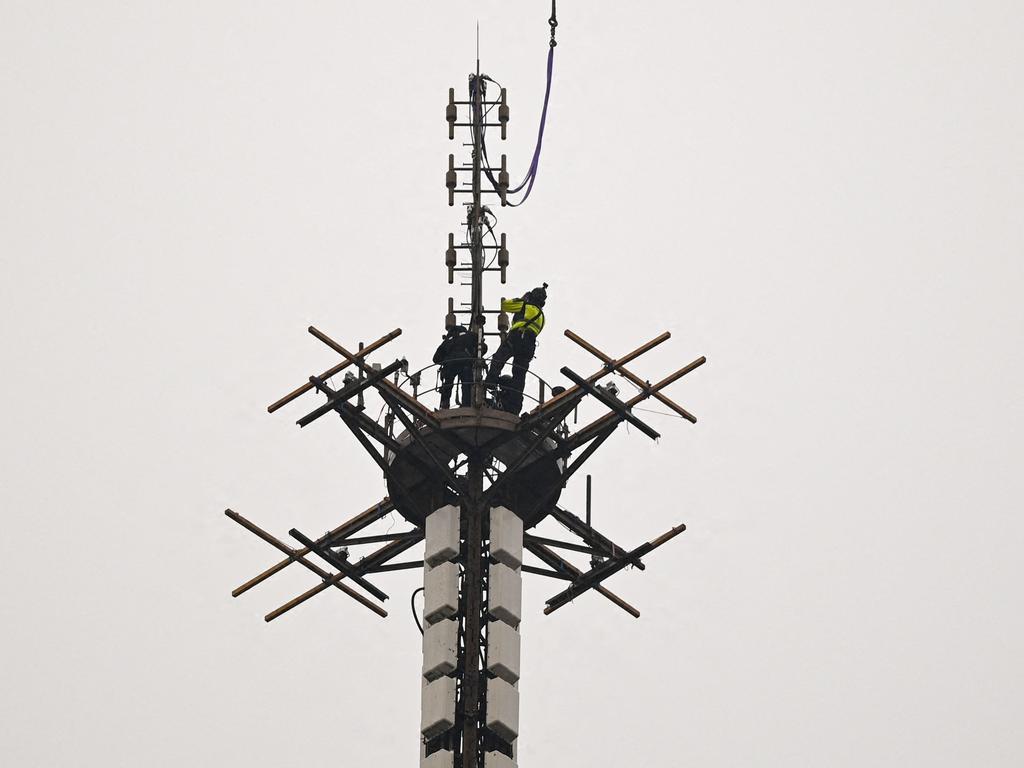 Workers connect the new antenna at the top of the Eiffel Tower in Paris on March 15, 2022. Picture: Christophe Archambault/AFP

“It’s a moment of great pride, historic, rare in the history of the Eiffel Tower,” said the head of the tower’s operating company, Jean-Francois Martins.

“She is returning to her roots as a place of technological* and scientific experimentation,*” he said.

Scientific progress was an integral* part of the tower’s 133-year history, Martins told the Associated Press.

“From the invention of the radio at the beginning of the 20th century to right now, decades after decades, the Eiffel Tower has been a partner for all the radio technology,” Martins said.

Designed by architect Gustave Eiffel, the masterpiece* was unveiled in 1889 but was originally going to be dismantled* 20 years later. Onlookers watch the installation by helicopter of the new antenna at the top of the Eiffel Tower. Picture: Emmanuel Dunand/AFP

In order to save it, Eiffel worked hard to give it a scientific purpose, installing weather-monitoring equipment and encouraging its use for astronomic* observation.

It was its role as an important radio-emitting* tower, initially for the military, that saved it from destruction, according to its official history.

In the 1910s, it was being used to send telegrams* as far as the United States and is credited with picking up German battlefield instructions during World War I.

Its previous antenna was fixed in 2000 and was used for digital television.

Breakdancing added to the 2024 Paris Olympics

CLASSROOM ACTIVITIES
1. Uses for the Eiffel Tower
The Eiffel Tower has become a famous landmark around the world and a structural statement of Paris. As you’ve read in the article, it was necessary to prove the tower useful in order to ensure it could stay standing. What other ideas can you think of for the Eiffel Tower to remain practical and useful in the current times?

Brainstorm with a partner and write your top five ideas below:

2. Extension
Why is the Eiffel Tower such a famous landmark? What makes it impressive and well-known around the world?

If you went to the Eiffel Tower, what would you most look forward to seeing?

VCOP ACTIVITY
Radio waves from the past

The new antenna on the Eiffel Tower has been added to enhance the digital radio signal in the region, but imagine that what they didn’t know was that the antenna was so powerful it allowed the UHF signal to contact the past. An electrical storm has caused the radio signals to magnify and anyone on a UHF band device (like a phone or 2-way radio) to be able to switch frequency and call the past.

Imagine being able to call your grandparents when they were your age, or a famous person to interview like pilot Amelia Earhart.

Practise using your speech marks and dialogue punctuation by writing out the phone or radio conversation you would have with your chosen person.

Remember to start a new line when a new person is talking.

Re-read your work aloud to listen to see if it makes sense and to check you have included all the correct punctuation and layout features.