Footy ump would have been great in election debate If only Channel 9 had called in a footy umpire to adjudicate “The Great Debate” between Prime Minister Scott Morrison and Opposition Leader Anthony Albanese, says Mark Knight in his latest cartoon.

The leaders of the two major political parties agreed to three debates during the six-week election campaign.

Scott Morrison and Anthony Albanese would debate each other over their policies and plans for the future of the nation.

The first debate went ahead on Sky News with a studio audience and a moderator*. The audience got to ask questions of the candidates and it all went fairly smoothly.

Two weeks later we had the second debate. This time we had a moderator and three journalists from the Nine Media group. 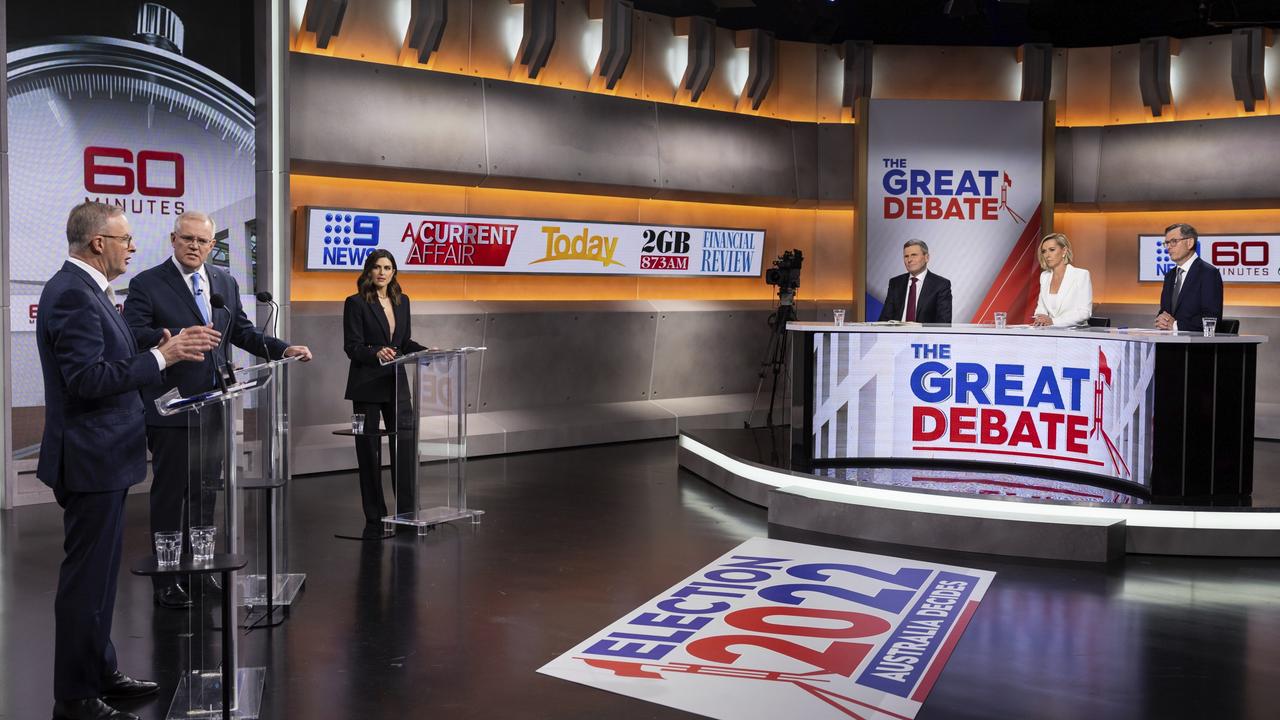 It unfortunately turned into a bit of a shouting match, with the moderator struggling to pull them into line. ScoMo and Albo talked over each other and it sounded like a free-for-all.

I imagined the scene if they were just left to go at it!

My drawing took shape based on one candidate taking offence at the other’s answer.

I drew the PM leaving his lectern* and hitting the opposition leader with a shirt-front tackle you might see on the footy field.

Albo is not going down lightly though as he lays into the PM. We see both of them, like in one of those bar room brawl scenes in a western movie, crashing through “The Great Debate” banner, bringing it and the studio lighting down. Lecterns are knocked over and paper debating notes are sent flying.

The moderator stands at her lectern aghast* at what is happening, just as she did during the actual debate. In drawings of this type, creating the feeling of movement is important, getting the poses right as well as objects flying about. You are trying to take a “freeze-frame” of the action.

The cartoon is about the fact that the debate got out of control, so I wanted to show how it could have been better adjudicated*.

Because I had drawn Albo and ScoMo in a football-like tackle pose, I quickly came to the idea that the moderator should not have been a journalist, but instead a football umpire with a very loud whistle! An umpire would have brought them to attention. Maybe even a few penalty free kicks too.

So I added my umpire, with a whistle.

Now come to think of it, I reckon that it is a pretty good idea for the next federal election television debate!

VCOP ACTIVITY
Stretch your sentence
Choose one of the people in the cartoon.

Write down three adjectives to describe them better.

Using all the words listed, create one descriptive sentence to describe this person.