Could “official lolly taster” be the best job in the world? 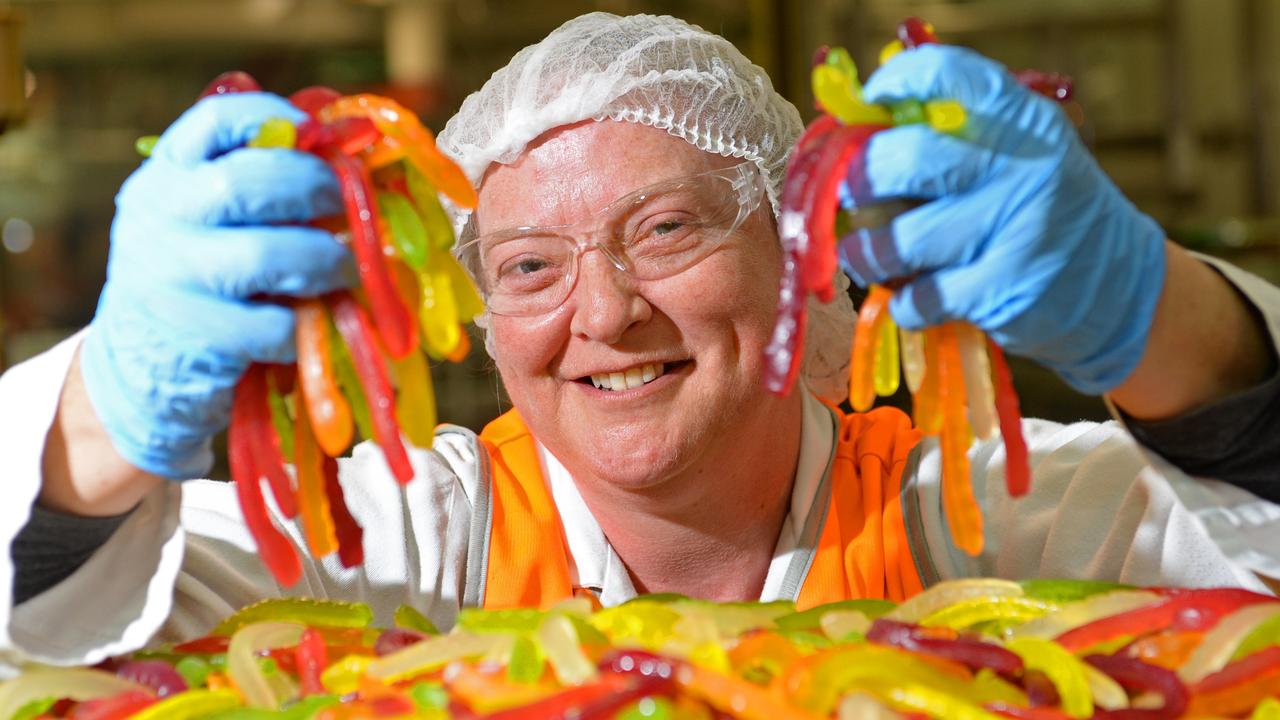 Caryn Hanigan has a job a lot of people really want to do.

She is a confectioner – or lolly maker – and is responsible for tasting lollies.

For almost 10 years, Ms Hanigan has helped craft the taste and shape of some of our favourite lollies.

“(As a taster) we’re looking to make sure that burst of flavour is there,” she said.

“It’s about the flavour, taste and the texture*.”

“You want to make sure (the lolly) isn’t a rock either. You want a chewy, flavourful, good sensation*.”

One part of Ms Hanigan’s role sees her create the moulds for the lollies – such as snake and dinosaur shapes – and making sure they fit into the mould during production*.

She was recently part of the team at The Natural Confectionery Company that helped make the new 25% Less Sugar range, a process that has taken three years.

“There’s a lot of people involved in the process to make sure it works,” she said.

The Natural Confectionary Company, owned by Mondelez Australia, makes 20,000 tonnes of lollies and more than 110 million packs from its Scoresby, Victoria, factory each year.

Associate Director of Candy Rohin Rosman said the confectionery industry was still strong, despite a shift away from processed foods and an awareness of the health benefits of limiting how much sugar we eat.

“There will be a future in lollies, we’re always wanting to treat ourselves,” he said.

“The two things, from my perspective*, that we need to tackle is portion* size and to reduce sugar, which we have done.”

As for Ms Hanigan’s favourite lolly? “It’d have to be the banana flavour,” she said.

“You’d think the banana would taste like the fruit, but then it has this real tang* to it which makes it cool.”

Bananas you can eat with the peel on

Call to ban lollies at checkouts

Learning to love fruit and vegetables

texture: the feel, such as rough, smooth or grainy

sensation: physical feeling of something

2. What three things is lolly making about?

3. How many snakes are made a minute?

4. What two things has the company changed to address health concerns?

5. Using the glossary, what does it mean to say something “from my perspective”?

There are lots of figures contained in this Kids News story. Find and use the figures from the article relating to the questions below to solve the maths problems.

– If a pack of Natural Confectionary Snakes originally had 100g of sugar, how much does it have now in the new range?

– How many million packs are made each month at the Scoresby factory?

– How many snakes are made in an 8 hour work day?

Extension: Write a job description advertising what would be required from a confectioner.

HAVE YOUR SAY: What would your dream job be? Would you have Caryn’s job if you could? Use full sentences. No one-word answers.