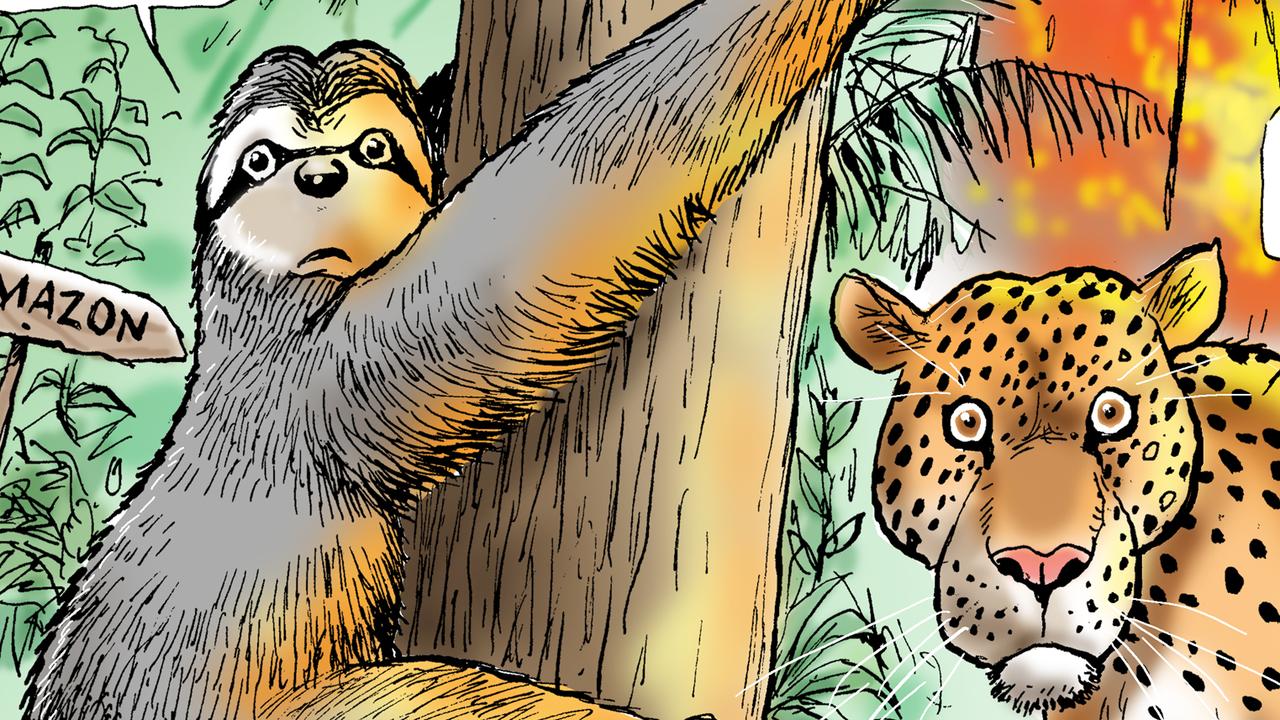 Part of Mark Knight's cartoon on the Amazon fires.

Pictures of the Amazon rainforest on fire shocked the world this week.

The Amazon covers nine countries in South America including 40 per cent of Brazil.

It is home to millions of unique* plants, animals, insects species* as well as the Amazon River. Its forests are described as the “lungs of the world” because they produce 20 per cent of the world’s oxygen and its millions of trees store carbon absorbed from the atmosphere.

The Amazon has a special place in the minds of people around the world, just like our Great Barrier Reef, it is seen as a natural wonder* that belongs to the world not just one country and should be protected for the future of all mankind*. A fire burns out of control after spreading onto a farm along a highway in Nova Santa Helena municipality in northern Mato Grosso State, south in the Amazon Basin in Brazil. Picture: AFP

To watch the wildfires destroying thousands of hectares of tropical rainforest after having been lit by people wanting to develop the forests into farmland, caused outrage both in Brazil and around the planet. World leaders were urged to take action.

Watching the catastrophe* unfold I wondered how I might draw a cartoon about it.

Of course I wanted to say what an environmental disaster this was, but how would I do that? Would I draw something political and criticise the Brazilian President Jair Bolsonaro for allowing aggressive land clearing to happen? Or would I go down the environmental path and simply comment on the damage being done to the Amazon ecosystem*?

What I wanted to do was to try and measure the destruction in my cartoon for the reader.

The Amazon is home to some amazing animals. Sometimes when I’m looking for an idea, I just start sketching. 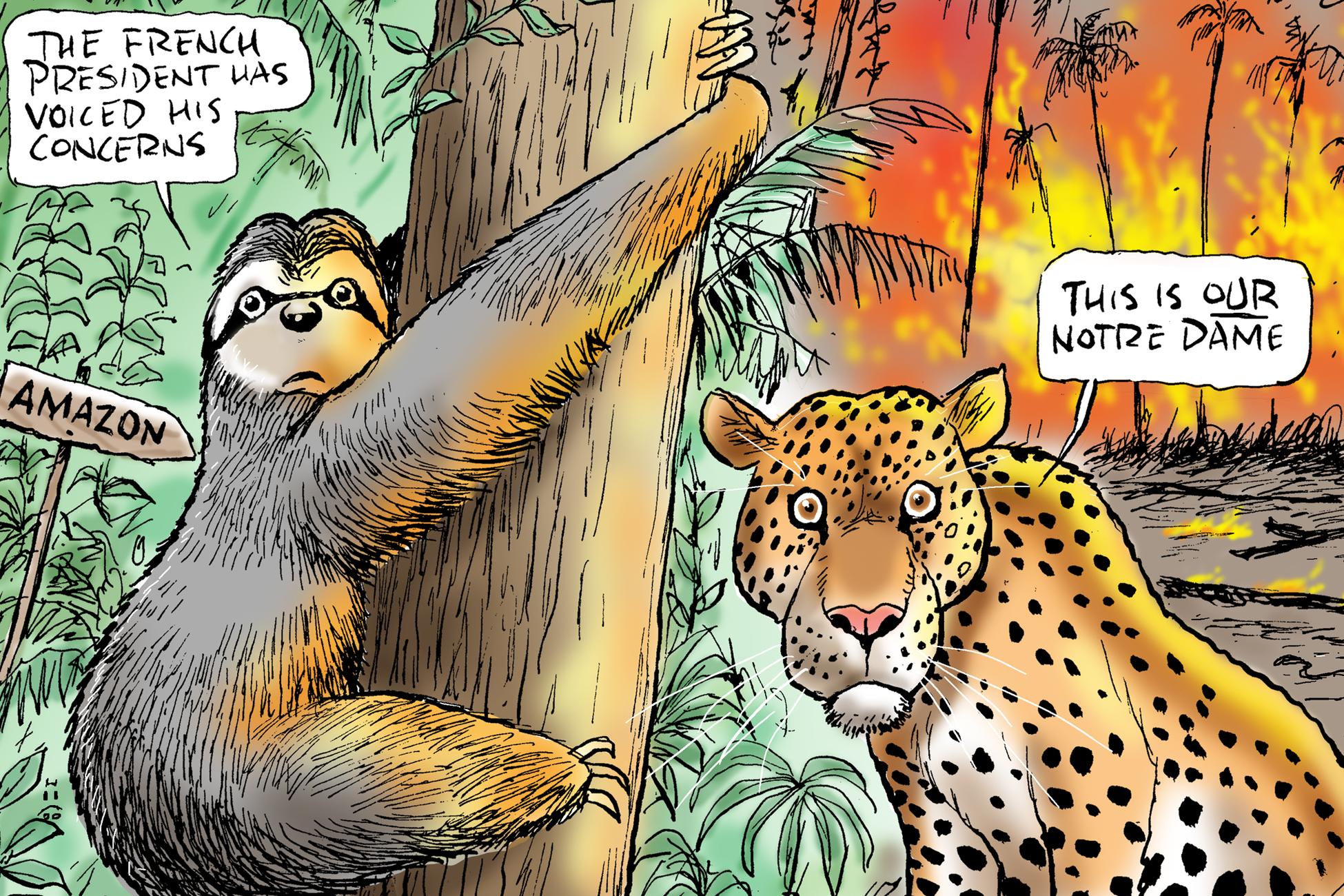 I searched for what type of animals live in the Amazon and discovered there were such wonderful creatures as the jaguar, the three-toed sloth, the tapir, giant anacondas and tarantula spiders. Scary stuff, but fun to draw!

I started sketching them and suddenly realised that the cartoon should look at this tragedy from the viewpoint* of those most affected by these fires — the animals that live there.

In Australia we are told that when there is a bushfire the best thing to do is to flee. Unfortunately sloths are one of the slowest moving creatures on the planet and running would be impossible for them, so I decided that a sloth in danger should be in the cartoon. I sketched a jaguar, too. The Amazon’s big cat has such a penetrating* stare! I felt it had to be in the cartoon.

Listening to news reports as I drew, I heard the French president Emmanuel Macron voice his concerns over what was happening. He was at the G7* conference in France with other world leaders. Then my brain started working and I remembered hearing President Macron earlier this year commenting on another fire that had brought the world to a standstill*. It was the fire that broke out in the gothic* Notre Dame cathedral in Paris. Smoke fills the air as flames burn through the roof of the Notre-Dame de Paris Cathedral on April 15, 2019. Picture: AFP

Notre Dame is one of the world’s most historic architectural* and religious wonders and, like the Great Barrier Reef and the Amazon, many people believe it belongs to the world.

Those who witnessed the fire sweep through the roof and see its central spire* fall into the flames were brought to tears. And that’s when the idea came to me that there was a similarity going on here between these two fires and those directly affected.

The Amazon bushfire was to the animals of the Amazon what the fire in Notre Dame cathedral was to the people of Paris and France.

And so I drew the Amazon forest with the fire ablaze in the background with the sloth recounting* the empathy expressed by the French President and next to it the jaguar staring out at the reader with a worried look saying, “This is OUR Notre Dame”.

Just like the Paris cathedral, it is a special place consumed by fire.

How to rebuild Notre Dame

However, Mark’s cartoon was drawn with an adult audience in mind and he knows that most people who look at it will also have read and watched a lot of news stories about both the Amazon fires and the Notre Dame inferno earlier in the year. People look at his cartoon with the help of a lot of background knowledge.

HAVE YOUR SAY: Which of the Amazon animals would you want to save?
No one-word answers. Use full sentences to explain your thinking. No comments will show until approved by editors.