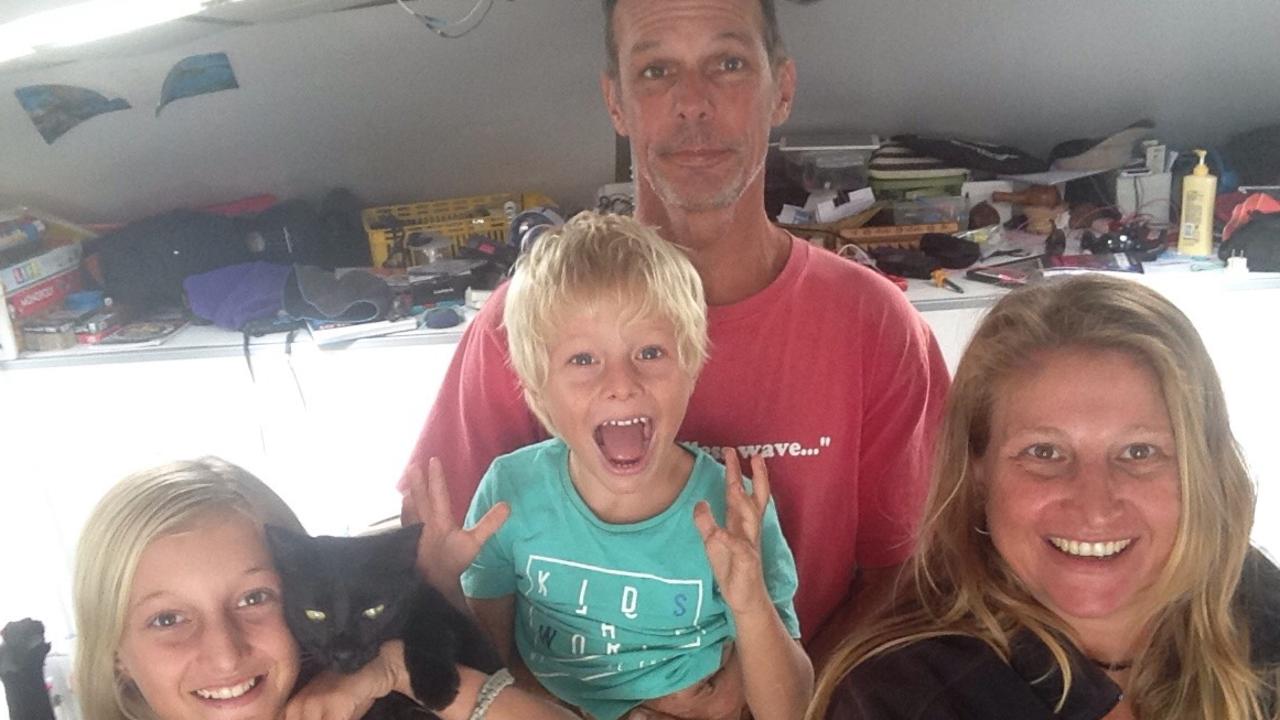 Australians Louise and Lachlan Turner with their children Siara and Kai and their cat Spook.

An Australian family’s dream trip sailing around the world turned into a frightening nightmare when they were attacked by pirates.

Louise Turner, her husband Lachin­ and their two young children were saved only by the lucky arrival of a Japanese warship.

“We were sitting ducks,” Ms Turner said of the moment they spied a pirate boat closing in on their catamaran AraKai in the Gulf of Aden, off the coast of Yemen. The family made a frantic mayday call for help when they realised they were being attacked by pirates.

More pirate skiffs* soon arrived, targeting the Cairns family with well-planned moves — passing close by to see who was on board while trying to steer them away from any other vessels*.

Terrified for their safety, particularly their children Siara, 11, and Kai, 4, Ms Turner made a frantic mayday call of “imminent* pirate attack”.

Their mayday, which is the word used around the world to make an emergency call via radio to signal a life-threatening situation, was heard by a container ship and passed to warships patrolling the International Recommended Transit Corridor because of the large number of pirate attacks­ in the area. 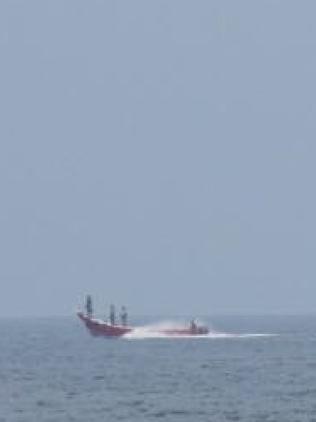 The Turner’s catamaran was approached by five suspicious skiff vessels. 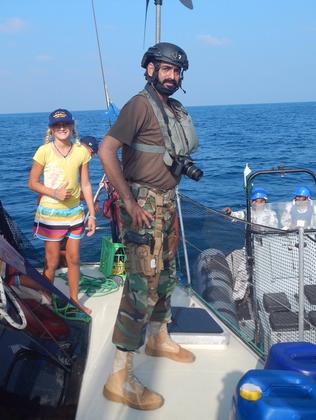 A naval officer who boarded the Turner’s catamaran during the rescue and gave the family extra fuel.

Ms Turner, 44, who skippered the catamaran while her husband, 48, manned the engines, said the pirates “looked eerily* focused”.

Running low on fuel as they tried to avoid the pirates, the family were relieved to hear a radio message advising them a helicopter from a Japanese warship was on its way.

While the helicopter only caused the pirates to move in closer, a Japanese naval* plane also arrived and the family was told to change course to meet up with the warship.

“For the next four hours we were stalked*,” Ms Turner said. The warship that assisted the family.

After hours of playing cat and mouse, the family’s worst fears came true as the radio crackled into life with the warning: “Three skiffs on fast approach.”

As the pirates came closer and closer, Ms Turner said: “This was it for us. Attack imminent­. Simply put, we could not possibly prevent them boarding us. But fate intervened* and we believe it was only by minutes that the appearance of two warships on the horizon thwarted* the attack.”

The pirate skiffs finally pulled away.

“We are incredibly lucky that we were not attacked, however, the threat was all too real,” Ms Turner said.

This is the first time the family members have talked about the attack in February and they are now safely continuing their journey.

When we think of pirates, we often imagine Captain Hook from Peter Pan, big ships with billowing sails and crew members dressed in eye patches and striped shirts.

But piracy is not just a legend from the high seas in days long past, it is dangerously real.

Modern-day pirates use fast speed boats and carry high-powered guns and other weapons as well as mobile phones and other hi-tech gadgets to keep in contact with bosses who tell them information about ships and their locations.

It is believed about $15 billion is stolen by pirates each year with about 20-30 robberies each month. It is rare that modern-day pirates are punished by law.

vulnerable: at risk of being hurt physically or emotionally

skiffs: a small, light boat for rowing or sailing

vessels: a large boat or ship

eerily: in a frightening way

naval: belonging to a country’s navy

intervened: stepping in to prevent something happening

QUICK QUIZ
1. What is the name of the Turner’s catamaran?
2. Where did the attack take place?
3. What signal did the family send to indicate they were in trouble?
4. Which country did the warship that came to their aid come from?
5. How much money is stolen by modern-day pirates each year?

On the ‘fake’ side draw some pictures and write some words or sentences to show what your ideas were about pirates before reading this news article. Did most of your ideas about pirates come from things you have seen in movies or read in picture story books? Did you think that pirates were only in stories?

On the ‘real’ side draw some pictures and write some words or sentences to show your new understanding of pirates.

Extension: Brainstorm as many adjectives as you can describing the experience of the Turner family.

2. The risk of adventure

Some people might say that sailing around the world is too dangerous because of risks like being attacked by pirates. Other people may think differently and believe that if you want to go on a great adventure then you need to take some risks. Lots of things we do for enjoyment involve the risk of something going wrong — should we let that stop us? What do you think?

Write an exposition giving your opinion on whether we should avoid doing adventurous things because they are risky. Try your best to provide good reasons for your opinion and to use persuasive language.

(Your piece of writing doesn’t need to be specifically about sailing around the world, it can include other activities instead of or as well as sailing.)

Extension: Pair up with classmate who had the opposite opinion to you. Read each other’s exposition and have a discussion where you challenge each other on the reasons you gave for your opinions.