ANCIENT Chinese legend told of a treasure trove* lost centuries ago in China’s Minjiang River as a battle raged upon its banks.

The legend was dismissed as an old fantasy tale, but turns out, it was true.

More than 10,000 items of gold, silver and bronze have been found at the bottom of the river in China’s Sichuan Province.

Chinese archaeologists (people who study human history and objects) have confirmed the pieces date from between 1368 and 1644AD. 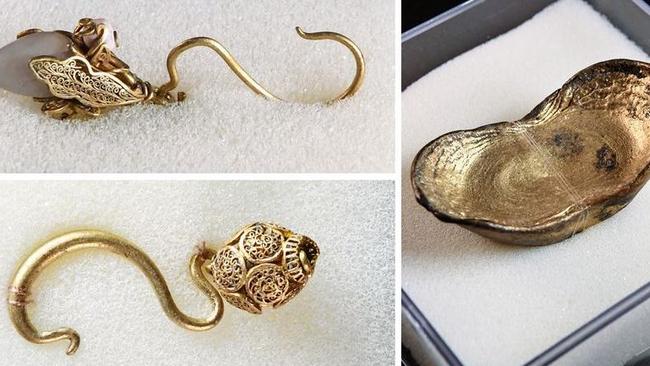 Some of the gold treasure uncovered so far. Picture: supplied

The dates correspond* with the timing of the legend. The legend tells the story of the leader of a Chinese peasant* uprising who lost his hoard of gold after he was ambushed* while attempting to move it aboard 100 boats.

For centuries, it was just a story and a rumour no one really thought was true.

“The objects uncovered are the most direct and compelling evidence to identify the area where the battle was fought,” Wang Wei, a Chinese archaeologist, told a Chinese newspaper, Xinhua.

The treasure was found where two rivers meet, around 50km south of Chengdu, the Sichuan capital.

Interest in the area emerged in 2005 when construction workers pulled seven silver bullion ingots* from the gravel of the river bank.

In 2010 the sight was declared a protected area but the Xinhua newspaper reported treasure hunters repeatedly raided the site.

To retrieve* the precious bounty, a 10,000sq m section of the river had to be drained using pumps and retaining walls. 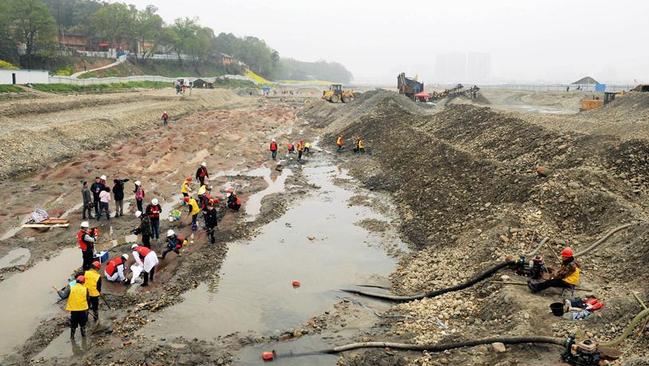 Looking for hidden treasure in the river. Picture: supplied

Many of the ancient pieces are still in good condition and inscriptions* on some of them are readable.

Archaeologists expect to continue digging at the site until April, and only time will tell what else the hidden treasure will reveal.

correspond: match up with

Read this carefully and create a short picture book for younger kids based on the legend.

Your picture book should have at least four pages.

Each page should have a drawing or picture as well as words that tell the story.

Take time to plan your story and pictures.

The legend of King Arthur and the Knights of the Round Table is very famous. Some people believe that it is based on a king who really lived.

Do you know about King Arthur? Find out about the legends.

Read this article from The Archaeological Institute of America about some evidence about an ancient king of England.

Do you think that this helps prove that there was a real King Arthur? Give three reasons for your opinion.

1. List the things that were found in the Minjiang River.

2. Write down the reasons why archaeologists believe that these things prove that the old legend is true.

3. What other things do you think the archaeologists might find as they keep digging? Write them down.

4. Give one reason for each item that you wrote in your answer to question three.

Time: allow 20 minutes for this activity

One of the most amazing archaeological sites in the world is the grave of Emperor Qin Shi Huang in Xian China.

Find out what was found in the grave.

Write a report about this incredible site. Don’t forget to include pictures.

OR create a poster about the site.

Time: allow 60 minutes for this activity

What tense was this article written in past, present or future?

How do you know?

Does it stay the same tense throughout?

Find as many verbs in the article as you can.

Write down the verb and change it to make it past, present and future tense.