The trio that led the Apollo 11 mission were Neil Armstrong, Edwin “Buzz” Aldrin and Michael Collins — three extremely brave astronauts willing to risk their lives to further space exploration for the human race.

They made history on July 20, 1969 when they landed a spacecraft on the moon, allowing Armstrong and Aldrin to become the first humans to ever walk on the lunar surface.

Here we take a look at the backgrounds of these three men and how their early years prepared them for such a courageous* mission.

NEIL ARMSTRONG: The first man to walk on the moon
Born on August 5, 1930, on a farm in Wapakoneta in the US state of Ohio, Neil Armstrong first flew in a plane at the age of six and became obsessed.

He built model aeroplanes and was licensed to fly at 16, before he got his driver’s licence. Neil Armstrong at the age of six. At 17, he studied aeronautical engineering* at Purdue University. His studies were partly financed by the US Navy and, after his first two years, he was called up to the Navy for flight training, where he qualified to be a naval aviator*.

In 1951, he was sent to the Korean War where he took part in active service, including an emergency ejection* after his plane was shot down by the enemy. He flew 78 missions during the Korean War before returning to Purdue to finish his degree.

In 1955, he graduated with a degree in aeronautical engineering and then applied to be a test pilot for NACA — the High-Speed Flight Station at Edwards Air Force Base. This involved testing new high-speed aircraft for the US military.

Armstrong was quickly recognised for his natural flying skills and willingness to take risks. He was also one of the most technically capable engineers. 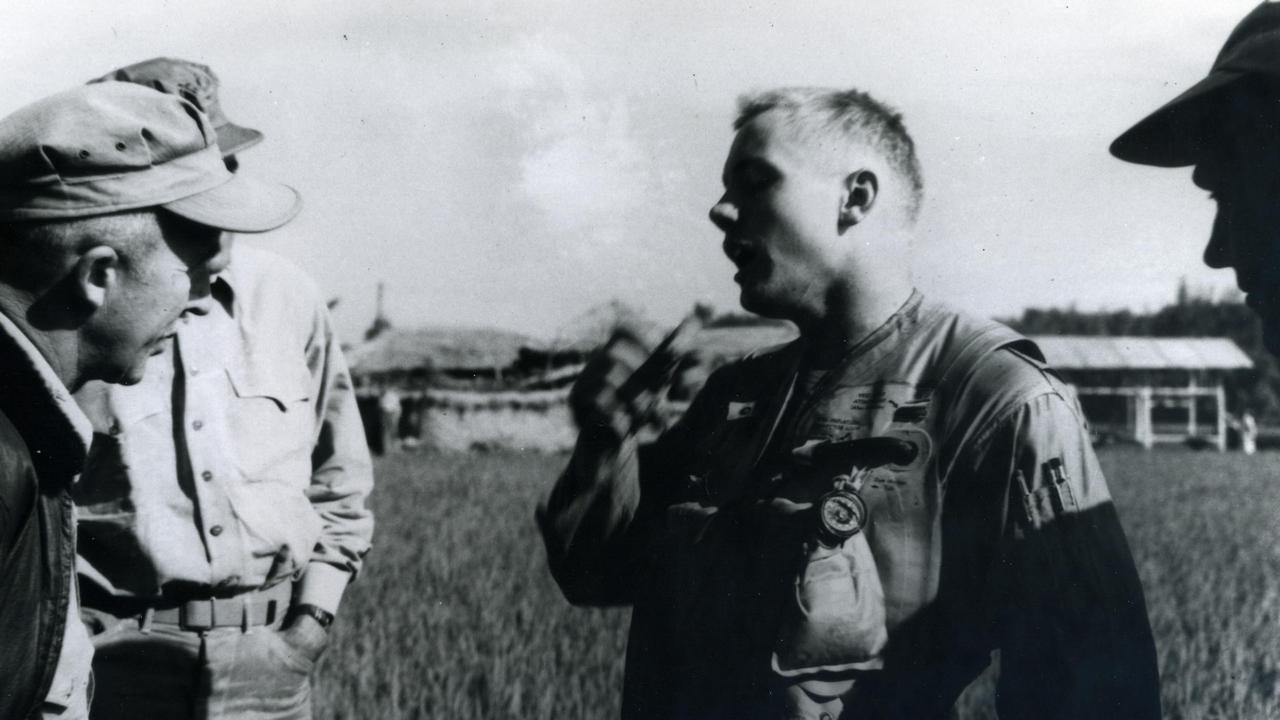 Navy pilot Neil Armstrong (centre) after his Grumman F9F-2 Panther was shot down in Korea in 1951. Picture: US Navy

In 1958, he was selected for the US Air Force’s Man in Space Soonest program before being selected in 1962 for the Apollo program — which aimed to put a man in space and land on the moon by the end of the decade.

After six years of preparation and training, in December 1968 Armstrong was chosen to be the commander for Apollo 11 and the first man to walk on the moon.

It is thought NASA chose Armstrong because he was a humble* man without a large ego*.

He successfully completed the mission to the moon and became world famous in an instant when his foot touched the lunar surface.

(Read more about the landing in Part 7 of our Moon Landing series on kidsnews.com.au/education-kits).

After the Apollo flight, Armstrong retired from space missions and took up teaching.
He also served on crash investigation commissions which looked at aircraft disasters such as the Challenger rocket explosion in 1986.

Armstrong was decorated by 17 countries for his space exploration efforts. He was given many special honours, including the US Presidential Medal of Freedom.

Armstrong married his first wife Janet Jearon in 1956 and they had three children. They divorced after 38 years of marriage. In 1994, he remarried Carol Knight.

EDWIN BUZZ ALDRIN: The second man to walk on the moon
Buzz Aldrin was born with the name Edwin Eugene Aldrin Jr on January 20, 1930, in Montclair, New Jersey in the US.

The nickname Buzz started when he was a kid after his little sister mispronounced the word “brother” as “buzzer.” His mum Marion and dad Edwin, who was a colonel in the US Air Force, shortened the nickname to Buzz and he was called that for the rest of his life.

Aldrin made Buzz his legal first name in 1988.

In 1947, Aldrin graduated from Montclair High School and joined the US Military Academy at West Point. He thrived on the strict activities and discipline* required and was top of his class in his first year. He graduated third in his class in 1951 with a degree in mechanical engineering.
He entered the Air Force next and flew 66 combat* missions in the Korean War as a fighter pilot. He was decorated with the Distinguished Flying Cross for his service. After the war, he enrolled at the Massachusetts Institute of Technology to earn his doctorate* in aeronautics and astronautics* in 1963.

After joining the space program, he became the first astronaut with a doctorate. He was an expert at creating docking* and rendezvous* techniques for spacecraft and earned a second nickname — “Dr Rendezvous”.

In 1966, Aldrin and astronaut Jim Lovell were assigned to the Gemini 12 crew. During their November 11 to November 15, 1966, space flight, Aldrin made a five-hour spacewalk — the longest and most successful spacewalk ever completed at that time. He also used his rendezvous abilities to manually recalculate all the docking moves on the flight, after the on-board radar failed.

He made history after snapping a photograph of himself, which would later be called the first “selfie” in space, during that mission.

For the famous Apollo 11 lunar landing mission, Aldrin took on the role of lunar module pilot.

He made history again as the second man to walk on the moon, following mission commander Neil Armstrong.

They spent a total of 21 hours on the moon and returned with 20kg of moon rocks. Buzz Aldrin with first wife Joan and their children. Picture: A Journey for all Mankind

Aldrin was decorated with the US Presidential Medal of Freedom and became an author of science-fiction novels.

He also paired up with hip-hop artists Snoop Dogg and Talib Kweli to create the song Rocket Experience to promote space exploration to young people.
Aldrin has been married three times and he has three children. He is now 89 years old.

MICHAEL COLLINS: Apollo’s third astronaut who did not walk on the moon
Collins was born in Rome, Italy on October 31, 1930, while his father Major-General James Lawton Collins was serving there with the US Army.

After the family moved home to America, Collins followed in his father’s footsteps and later graduated from West Point and joined the US Air Force.

He specialised in flight training and learned how to drop nuclear weapons.

In 1962, he applied to become an astronaut with NASA but did not pass the astronaut selection.

Collins eventually was accepted into the third group of astronauts in 1963, who were hired for the Gemini Earth-orbiting missions (which flew crews between 1965 and 1966) and the Apollo program. Michael Collins (right) relaxes with Neil Armstrong (left) and Buzz Aldrin during training for their mission in 1969. Picture: NASA

One astronaut was supposed to remain behind in the command module while the other two astronauts flew to the moon and back in the lunar module.

Collins is often described as the “forgotten astronaut” of the Apollo 11 mission to walk on the moon because he didn’t step foot on the lunar surface.

But his role in the mission was just as important as that of Armstrong and Aldrin.

Collins spent a total of 266 hours — over 11 days — in space. He left NASA in 1970 and served as director of the National Air and Space Museum in Washington DC for eight years before entering the private sector*.
He and his wife, Patricia, have three children. He is 88 years old.

Part 4: Training to land and walk on the moon

HAVE YOUR SAY: Would you like to be an astronaut? Tell us why or why not.
|No one-word answers. Use full sentences to explain your thinking. No comments will show until approved by editors.