After a tricky landing, Neil Armstrong becomes the first man in history to walk on the moon This photo aken by Neil Armstrong (reflected on helmet) shows Buzz Aldrin walking on the Moon on July 20, 1969. Picture: AFP/NASA

It was time. Time to attempt putting a man on the moon.

Neil Armstrong and Edwin “Buzz” Aldrin put on their spacesuits and climbed through the docking tunnel from the command module Columbia to the lunar module Eagle.

As they started this final routine, they hoped all their training would lead to a successful moonwalk, but knew it wasn’t guaranteed. So many things could go wrong.

“I thought we had a 90 per cent chance of getting back safely to Earth on that flight but only a 50-50 chance of making a landing on that first attempt,” Neil Armstrong told Alex Malley during an interview for the Certified Practising Accountants in Australia.

“There are so many unknowns on that descent* from lunar orbit down to the surface that had not been demonstrated yet by testing and there was a big chance that there was something in there we didn’t understand properly and we had to abort* and come back to Earth without landing.” Armstrong said. Once the two astronauts launched the Eagle towards the moon’s surface, they experienced several issues.

“Program alarm,” Armstrong radioed back to mission control as he eyed the code readout on his computer. “It’s a 1202.”

What did the alarm mean? Should they abort the landing? Despite years of training, the astronauts had never dealt with a 1202 alarm. Neither had some workers back at mission control.

After several tense minutes, the astronauts were told: “It’s executive overflow,” meaning that Eagle’s computer was doing too many things at once, and was prioritising* tasks. “If it does not occur again, we’re fine,” said mission control.

It did happen again, but didn’t affect the landing.

Another stressful moment occurred when the on-board computer started telling Armstrong to land on the side of a large crater with steep slopes littered with huge boulders*.

“Not a good place to land at all,” said Armstrong. “I took it (the Eagle) over manually and flew it like a helicopter out to the west direction, took it to a smoother area without so many rocks and found a level area and was able to get it down there before we ran out of fuel.”

The Eagle had just 30 seconds worth of fuel left when it came to a stop in the Sea of Tranquility.

On July 20, 1969 (US time), Armstrong radioed mission control and announced: “Houston, Tranquility Base here. The Eagle has landed.”

Mission control erupted in celebration as the tension broke, and a controller told the crew “You got a bunch of guys about to turn blue, we’re breathing again.”

After checking fuel and other checklists, Armstrong prepared to leave the craft, lower himself down the ladder and walk on the moon.

On taking his first steps, he said the famous words: “That’s one small step for man, one giant leap for mankind*.” Armstrong later said he never planned the words in advance because he was never certain of success.

“I was elated*, ecstatic and extremely surprised that we were successful,” he said. He admitted he meant to say “That’s one small step for a man”, but in the excitement, he left the word ‘a’ out.

The two men explored the surface for two-and-a-half hours, bouncing on the surface during a moon walk, collecting moon rocks and soil samples and taking photographs. Armstrong took most of the images which is why there are few of him taken on the lunar surface.

Armstrong set up equipment from the “Early Apollo Scientific Experiments Package”. It included a light reflector to measure the distance between the Earth and the moon, seismometers to measure potential moonquakes, and a foil panel to analyse solar wind. US astronauts Neil Armstrong and Buzz Aldrin plant the US flag on the lunar surface. Picture: AFP/NASA

They left behind an American flag planted in the surface, a patch honouring the fallen* Apollo 1 crew, and a plaque on one of Eagle’s legs.

The plaque said: “Here men from the planet Earth first set foot upon the moon. July 1969 AD. We came in peace for all mankind.”

Meanwhile, Collins was working alone in the command module for 21.5 hours, running systems checks, performing moon observations and communicating with mission control when he could.

It was lonely at times for the solo astronaut. As the command module drifted behind the moon, cutting off his communication with Earth, he wrote: “I am alone now, truly alone, and absolutely isolated from any known life. I am it. If a count were taken, the score would be three billion plus two over on the other side of the moon, and one plus God knows what on this side.”

All three astronauts knew there was a chance that Armstrong and Aldrin could remain stranded on the moon’s surface or, if the engine didn’t burn long enough, be lost in space, leaving Collins the sole survivor of the historic mission.
US President Richard Nixon had prepared a speech in case of such a tragedy. Part of that speech read: “Fate has ordained* that the men who went to the moon to explore in peace will stay on the moon to rest in peace. These brave men, Neil Armstrong and Edwin Aldrin, know that there is no hope for their recovery. But they also know that there is hope for mankind in their sacrifice.” The Apollo 11 lunar module as it flies back up to the command module where Michael Collins has been waiting for his fellow crew members. Picture: NASA

Collins — alone in Columbia as the world focused on Armstrong and Aldrin walking on the lunar surface — fretted* about his two companions below him on the moon and revealed, in a note written at the time, that he was now “sweating like a nervous bride” as he waited to hear from the Eagle.

“My secret terror for the last six months has been leaving them on the moon and returning to Earth alone; now I am within minutes of finding out the truth of the matter,” he wrote. “If they fail to rise from the surface, or crash back into it …. I am coming home, forthwith, but I will be a marked man for life and I know it.”

But Collins should not have worried so much. The engine on the lunar module worked perfectly and the Eagle blasted back up to the command module.

Collins performed the necessary docking actions with the lunar module and Armstrong and Aldrin rejoined him.

On July 21, the three astronauts began their three-day journey home to Earth.

The crew splashed down safely into the ocean off Hawaii on July 24, 1969.

On their return to the US, they were celebrated as heroes and conducted speaking tours across America and the world.

The mission was complete. 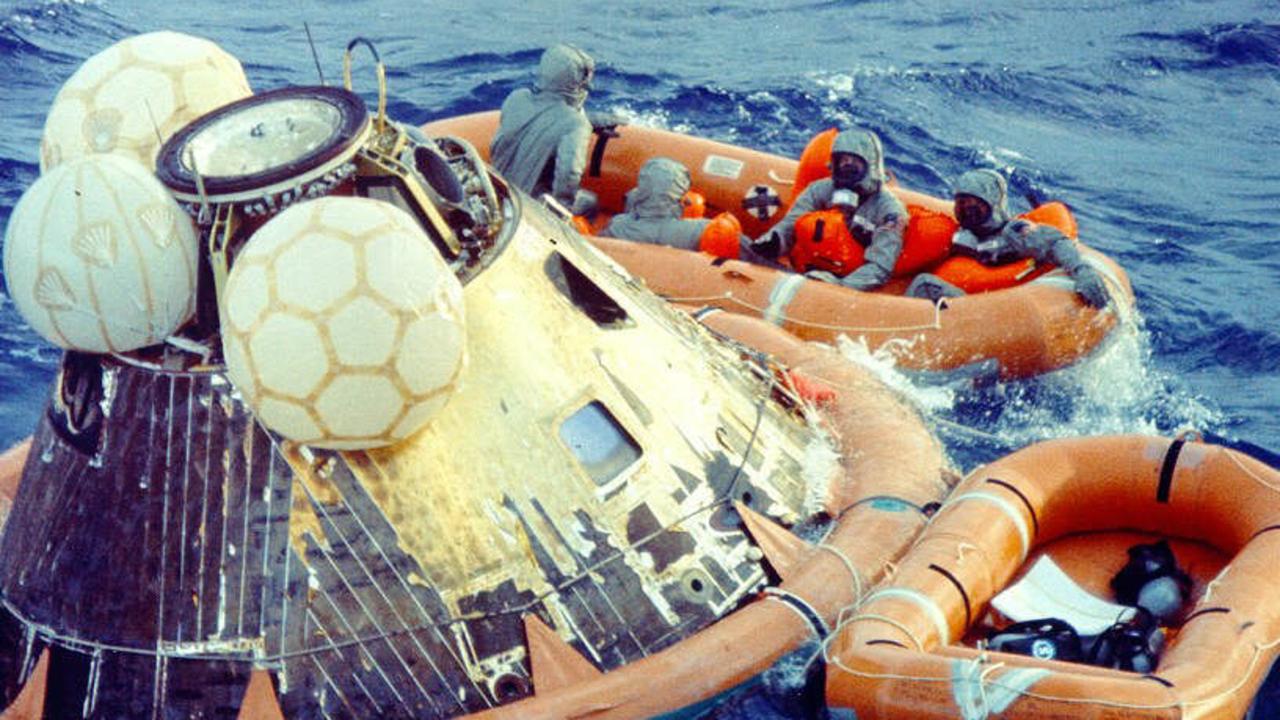 The Apollo 11 crew in isolation suits after splashdown in the ocean near Hawaii in July 1969. Picture: NASA

Part 6: The launch and journey to the moon

HAVE YOUR SAY: What do you think it would be like to walk on the moon? Describe it.
No one-word answers. Use full sentences to explain your thinking. No comments will show until approved by editors.