Yes, the Great Aussie Coin Hunt is back, with all 26 newly minted coins available at participating post offices, via the Australia Post website and – with any luck – in your change.

According to RAM coin designer Bronwyn Scott, the newly released alphabet of icons* will delight and amuse coin lovers of all ages.

The collection includes favourites like Sydney Opera House and the koala and there are some funny surprises too, including flies being thwacked* by a fly swot on the F coin and a cross-looking emu on the E.

“I just love how quirky* he is,” Ms Scott said. “I feel like emus have a lot of character, so I had fun trying to get that unpredictable* quirkiness of the emu. I ended up doing a bit of a stylised thing (with the collection), trying to get that quirky, Australian larrikin* vibe to it.” 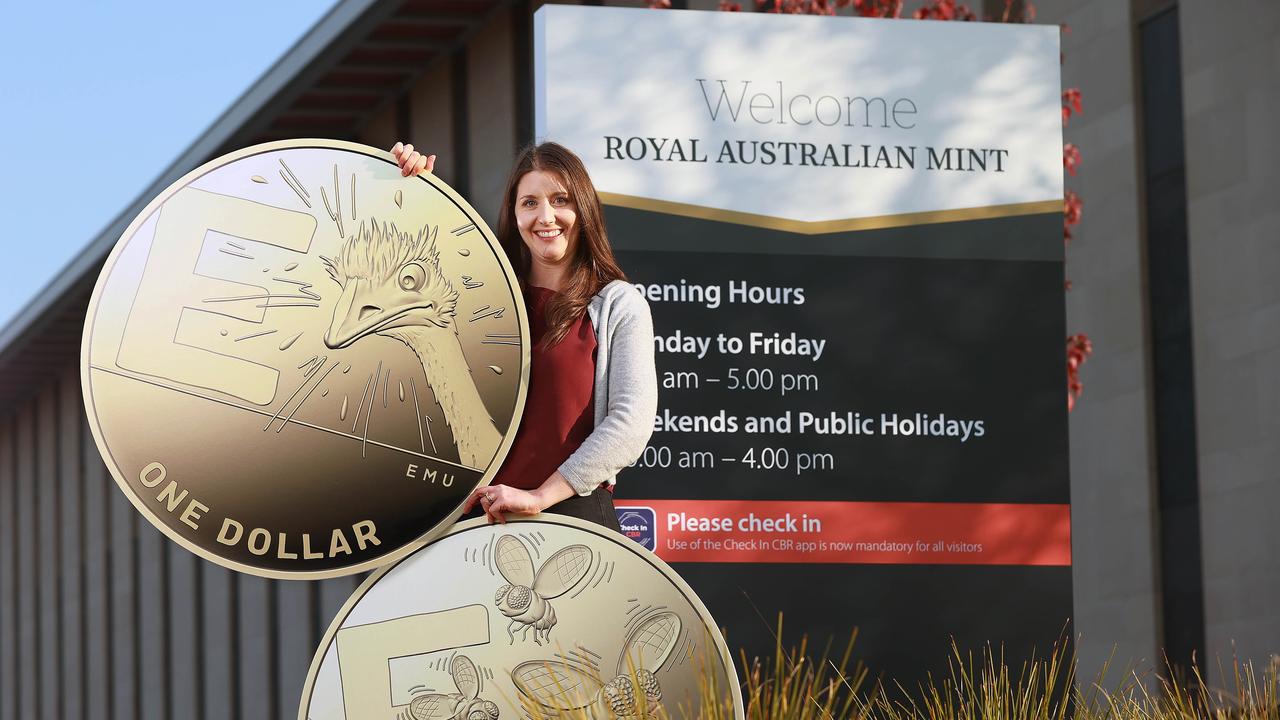 Bronwyn Scott, Royal Australian Mint coin designer, pictured with oversized versions of the ‘E for emu’ and ‘F for flies’ $1 coins as part of the new A-Z of Aussie icons in the Great Aussie Coin Hunt. Picture: NCA NewsWire/Gary Ramage.

Ms Scott’s path to coin design was unexpected. After completing a Bachelor of Natural History Illustration, she did an advanced diploma in graphic design and only discovered coin design after applying for another role at RAM.

Even after eight years in the job, Ms Scott said the chief challenge in designing each $1 coin remained the minuscule* size of her canvas.

“You’ve got such a tiny area to fit so much information on. It’s just that balance of keeping it simple … but still getting as much detail and information as you can.”

Ms Scott said she feels “pretty lucky” to be designing something that so many people can see, especially when a coin that ends up in general circulation* and people can just find it in their change.

The long life of a coin has extra meaning for collectors too.

“Australia Post takes very seriously the fact that we also are charged with recording Australia’s history …(and) a reflection of what Australian society is all about.

“We really want to bring Australia back to Australians. So the Great Aussie Coin Hunt gives us a great opportunity to do that,” he said. And if you think that Ms Scott and the RAM design team have special access to the Great Aussie Coin Hunt collection, think again: RAM security is tight and the ability to handle any coin is strictly limited.

“We’re upstairs in our coin design studio,” Ms Scott said. “We get to see the final products, but not so much the bulk of the circulating coins. The massive drums of $2 coins? That just happens every day without us really noticing.”

As for what her friends and family think of her job at the Mint, Ms Scott said they think it’s “pretty cool.”

“You just don’t realise that these jobs are out there, so tell (kids) when they get old enough to start applying (and) get into graphic design.”

CLASSROOM ACTIVITIES
1. Design your own Aussie coin
What letter does your first name start with? Brainstorm a list of all the “Aussie” things you can think of that begin with that letter. (Or include that letter if you have an especially tricky letter like X or Z.)

Draw a circle the size of a $1 coin, then add your own design featuring some of the things you brainstormed. Tip: use a sharp pencil so that you can fit as much detail as possible.

2. Extension
You will need some $1 coins, digital scales and a ruler to complete this task.

What are the common features that all Australian $1 coins share?