Human-sized wormholes through space and time could be possible An artist’s illustration of a wormhole, which is a name we give a theoretically possible idea of a gateway connecting two points in space and time.

Wormholes that let humans travel through space and time could be possible, scientists have proposed.

What scientists understand about physics — the study of matter and its motion through space and time — supports the idea of wormholes but until now most scientists agreed they would be too small and unstable for a person to travel through.

Physicists* at Princeton University in the US have used quantum mechanics to find a mathematical loophole they think shows it could be possible to create a wormhole large enough for humans and their spacecraft. Quantum mechanics is physics at a tiny scale, to do with atoms* and the subatomic particles that make up atoms. WHAT IS A WORMHOLE?
Wormholes could act like a magical gateway connecting two points in space and time with each other.

It’s like drawing a line between two dots on a piece of paper, folding the paper over so the dots are touching and then forcing your pen through the page, taking a shortcut through space and time.

The one hole through the different points on the piece of the paper represents the wormhole.

A wormhole is a theoretical* method of folding space and time so two places in space can be connected together.

In science fiction — such as in the movie Intersteller — they’re often depicted* as gateways that can let people step into another time or galaxy.

The movie Interstellar shows how astronauts on a spacecraft could travel through a wormhole with only a small amount of time passing for them but, for people back on Earth, hundreds or even thousands of years could have passed.

Physicist Albert Einstein theorised* that space time can be tangled up so tightly that two points can share the same physical location.

Then all you need is a short wormhole between the two for instantaneous* travel. WHAT THE PHYSICISTS SHOWED
The physicists at Princeton used maths to suggest conditions that could make a wormhole possible and even imagined what one would look like.

They wrote: “From the outside they resemble intermediate mass charged black holes.

“Their big size comes from demanding that a human traveller can survive the tidal forces.

“They take a very short proper time to traverse*, but a long time as seen from the outside.

“The traveller acquires a very large boost factor, γ, as it goes through the centre of the wormhole.

“We have argued this most clearly for the case that the wormhole exists in a cold and flat ambient* space.”

But, the scientists warn, they can’t say wormholes to transport humans do exist, just that they are theoretically possible.

“We have not given any plausible mechanism for their formation. We have only argued that they are configurations* allowed by the equations.” 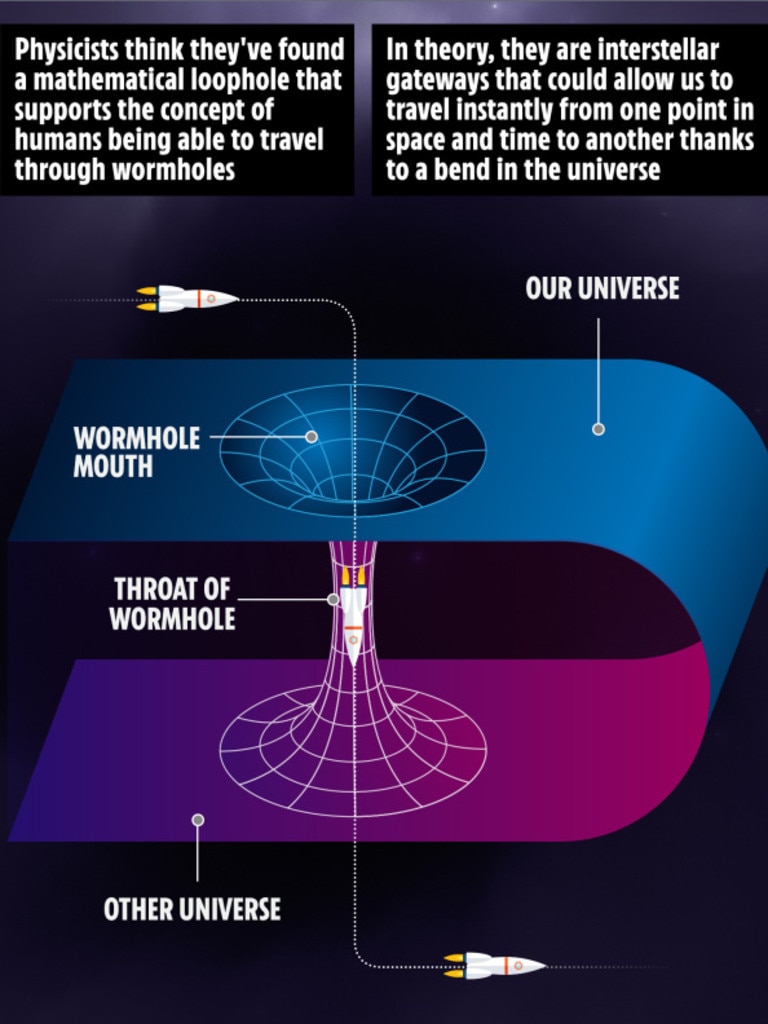 How a wormhole would work.

Wormholes may be theoretically possible to create but will remain impossible unless we create more advanced technology.

This is what physics experts Juan Maldacena and Alexey Milekhin have been trying to prove.

They relied on something called the 5-dimensional warped geometry* theory, which proposes that the Universe is in five dimensions.

A five-dimensional universe would allow something called negative energy to exist and it’s this that the scientists think could make a wormhole stable and large.

Then we’d just need the right tools to manipulate* the negative energy.

Some astronomers think we should look for natural wormholes in space by observing how gravity is distorting* light behind stars.

The full study can be read on the preprint server arXiv.

CLASSROOM ACTIVITIES
1. Turn Back Time Narrative
Think of a time and place that you would like to travel to if this ever became a possibility. Write a narrative of your adventure as you travel through a wormhole to a time in history or the future! Ensure your narrative has an orientation, problem and resolution. Choose whether you are the main character or you make up others or your classmates!

2. Extension
Get a piece of paper and do what the article says to explain how a wormhole is created –

“It’s like drawing a line between two dots on a piece of paper, folding the paper over so the dots are touching and then forcing your pen through the page, taking a shortcut through space and time.

The one hole through the different points on the piece of the paper represents the wormhole.”

Does this help you understand?

HAVE YOUR SAY: Would you travel through a wormhole? Where and when to?
No one-word answers. Use full sentences to explain your thinking. No comments will be published until approved by editors.