Winners of hit competition Lego Masters soon to be revealed 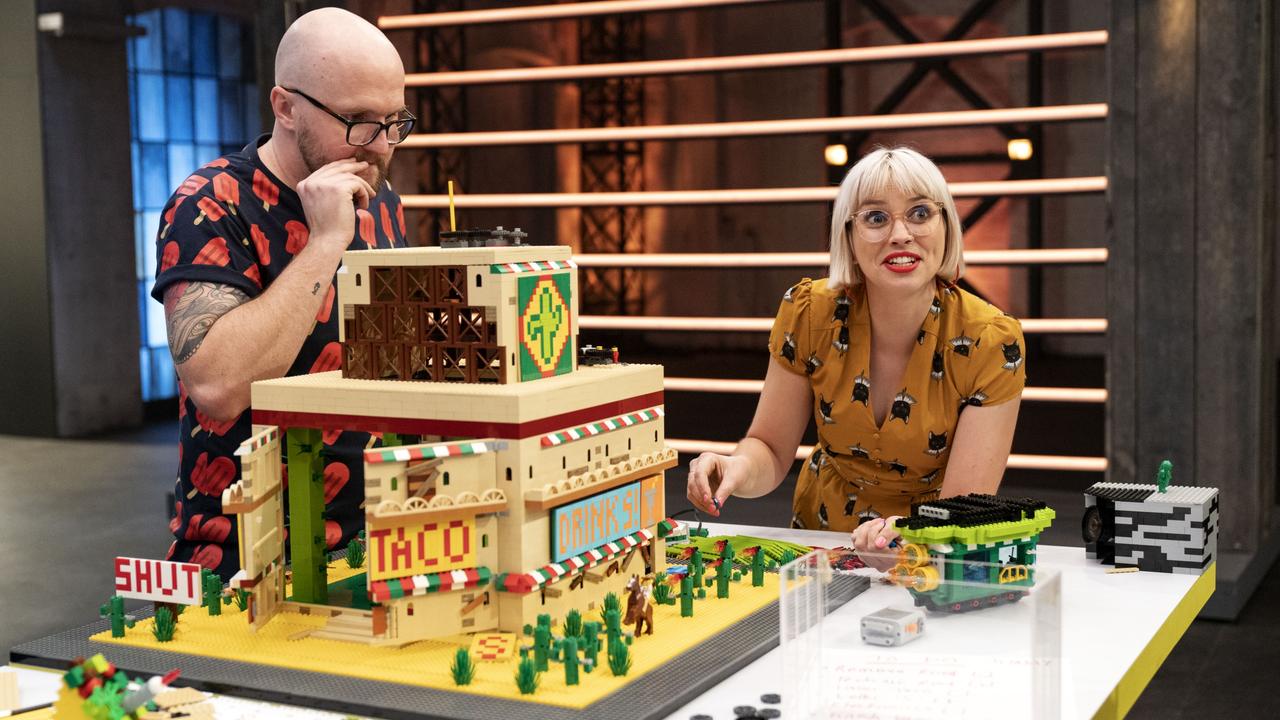 In just a few days Australians will know who will be the country’s first Lego Masters.

The two members of the winning team will each get the title of Lego Master, a made-from-Lego trophy and a share of the $100,000 prize.

Over the first six of a total of nine episodes, eight teams of competitors gave their all over long, exhausting days, designing and building extraordinary structures from some of the 2.5 million Lego bricks to choose from in The Brick Pit.

And then Lego Masters host Hamish Blake smashed each of those creations.

One adult Kids News spoke to said it was “devastating” to see the creations smashed.

Two 10-year-olds and one nine-year-old Lego Masters fans told Kids News that Hamish smashing each of the incredible structures was the best part of the episodes. For some viewers, Hamish Blake smashing the creations on Lego Masters is the best bit to watch. Picture: supplied

Hamish worried before the show began that he’d get sick of Lego.

“There was a real possibility,” he said.

“I like Lego, don’t get me wrong, I build it a few times a year and I play with kids, but there’s a difference between me as a casual* dad consumer* Lego fan versus every single day doing it 12 hours a day.”

He needn’t have worried.

“I’ve got to say after the first few days that fear began to abate*. I think I’ve gone deep, Lego’s got me. The more you get to know about the (Lego) world, the more detail you see, the more nuances* you get your head around. I think it’s had the opposite effect.”

Hamish is in awe of his co-host Ryan “Brickman” McNaught, the southern hemisphere’s only Lego-certified* professional.

“He’s awesome,’ Hamish said. “You’ve got to understand — which I didn’t before this show — there’s only 14 of these people in the world. They’re like The Avengers … a secret society of super-powered Lego builders.

“The only problem I have with Brickman is he doesn’t show off enough.” Hamish Blake and Ryan “Brickman” McNaught in front of some of the competitors’ creations. Picture: supplied

Hamish doesn’t rate his own skills up there with Brickman’s or the competitors’.

“I mean I stand in The Brick Pit among those millions of bricks and, even though there’s two million bricks in there, it doesn’t help. I still can’t build an AFL football, unless it’s like five red bricks put together.”

VIDEO: This trailer shows some of the competitors’ great creations

LEGO THROUGH THE YEARS

CLASSROOM ACTIVITIES
1. Dream job!
Who would have thought that playing with Lego as a child could lead to a career!

‘Brickman’ is a Lego-certified professional. What an awesome job to have! It would take a unique skill set to do well in this job and to be in this competition.

What skills, knowledge and character traits do you think you would need to be a Lego Master or a Lego-certified professional?

Create a chart and list the SKILLS, KNOWLEDGE and CHARACTER TRAITS that are required for this job.

KNOWLEDGE — knowledge of all the types of Lego available.

CHARACTER TRAITS — persistence to work on a design for many hours.

What would be some of the negatives of being in this competition or career? Are there any?

If you can think of any, list these in a separate column.

2. Extension
There have been some pretty amazing Lego creations in the Lego Masters competition. Look at some of the photos in this article for inspiration.

Design your own Lego creation. Use pencil and paper to draw what you would like to create.

One of the key areas that competitors in this competition must focus on is that your Lego creation, must tell its own story — that is, someone else looking at it should be able to see the story behind the creation — without being told what is happening.

Make sure your picture shows the ‘story’. Think about the types of Lego available. How will you use the different size, shape and colour bricks to create the shapes you need in your design?

HAVE YOUR SAY: Have you watched Lego Masters? Is it inspiring? What is your favourite Lego creation?
No one-word answers. Use full sentences to explain your thinking. No comments will be published until approved by editors.