He’s even already bought his first house, a two-bedroom home he built on his parents’ property on the south coast of NSW.

Reekid, who wants to keep his real name private, is part of a new wave of social media celebrities, earning what many would consider a fortune for his gaming videos.

“I could go work in retail if I wanted to or I could go get a job at Macca’s flipping burgers,” the 14-year-old said.

“It is astonishing to me that I am where I am. I had never even thought it would happen.

“Over time, it just came to me. It went from me playing virtual reality here and there online and talking to people to meeting a few smaller VR YouTubers and then us all blowing up from each other’s antics*.” 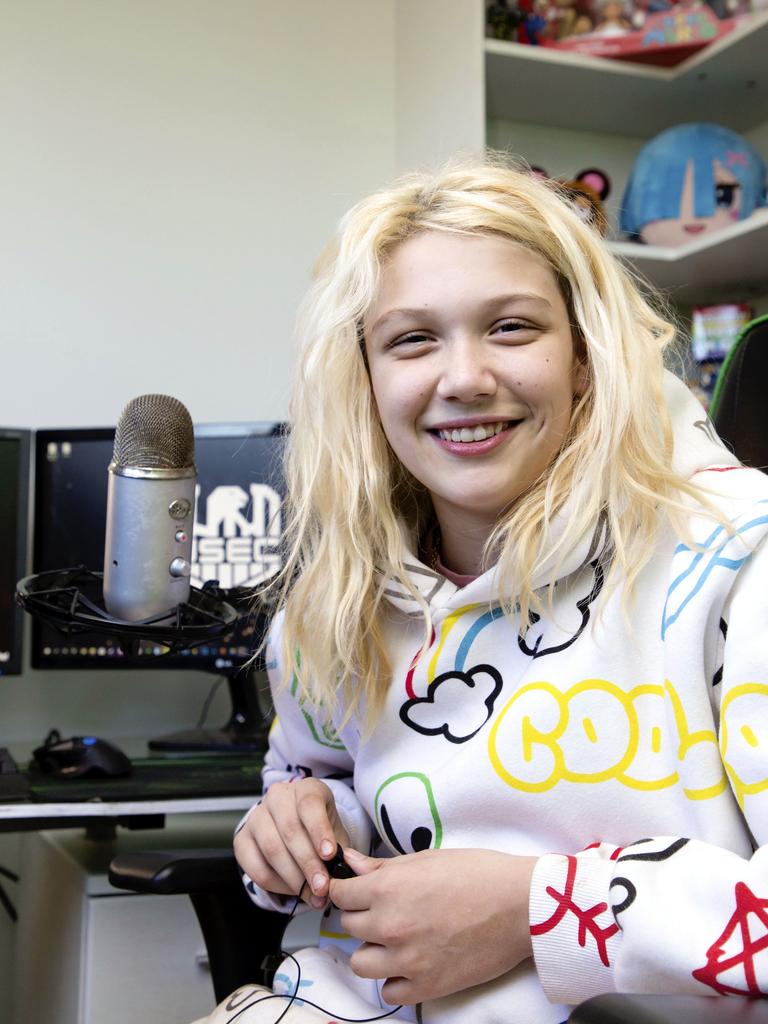 Reekid’s parents recently helped him get a manager and he pulled out of Year 9 at regular school in February to study remotely with big dreams for his future.

Now his days are spent in front of the $10,000-plus computer set up in the spare bedroom of his small home that he said he had to get because “otherwise I would have driven my parents insane”.

The blonde teen still lives on the same block as his parents, who stay in a granny flat they extended after the family home was burnt down in the New Year’s Day 2020 bushfires that ravaged* much of NSW and Victoria.

Reekid explained that he made videos of himself playing virtual reality games, which he then shared online with his followers.

“I create videos for people on the internet. I do virtual reality,” he said. “It is pretty much a headset that you wear over your eyes, like a mask that puts you in a virtual world.”

Reekid, who has six-year-old twin siblings, said he had “lost count” of how many hours he spent each day on his computer.

“I get up, eat breakfast, have a shower and sit down and see what I can record for the day and play video games,” he said. “I just generally like video games. It’s always been something that I’ve enjoyed doing.”

Reekid also has a strong following on Instagram (274,000 followers) and TikTok (55,000 followers), and he is tracking to hit one million subscribers on YouTube over the next few months. Reekid with one of his siblings at his family property, which is surrounded by bushland that was devastated in the Black Saturday bushfires.

Reekid’s gaming profile has seen him recognised on the street, something that he is getting used to. On a recent trip to Sydney to meet with his management, he did an impromptu* meet and greet with fans who joined him at the Pitt Street Mall shopping strip for photographs.

He will soon release a series of non-fungible digital token* trading cards, which will provide further opportunities to interact* with fans via trading and collecting the cards.

In his earlier time on social media, he would hide his identity but more recently has started to show his face.

But he has already learnt that fame comes at a cost.

Reekid said he was now being homeschooled after his love of computer games had seen him get bullied, harassed and involved in fights at school.

The name Reekid comes from his screaming in YouTube videos.

“The reeeeee is a scream. Reekid literally means scream kid. That is where the name came from,” he said.

The end goal for Reekid is not fame or fortune. He wants to continue studying and one day become a full time game developer, creating the very kind of games he plays today.

“That has always been my passion,” he said. “I like to do coding classes, game development and design, that’s what I like to do in my spare time.” Reekid loves being in nature, especially walking his dogs in the bush around his home, when he’s not playing video games.

When not gaming, Reekid likes to be in nature, outside in the real world.

He used to ride his dirt bike but it was destroyed in the bushfires. Bushwalking, swimming in the pool, walking the family dogs and playing the ukulele* are some of the other things he likes to do.

Reekid doesn’t like to think back to the bushfires that destroyed the family home.

He is grateful his computer equipment miraculously survived in the granny flat. Most of the family’s other belongings were destroyed and the trauma of that time very much still sits with them.

“Seeing this whole forest, my safe space, was totally destroyed, everything was just ash and a black charcoal mess,” he said.

“It does a lot to your psyche. I’m a flower boy. I like pretty nature stuff. Living in a forest is not only the coolest thing I’ve ever done, but also the most therapeutic*.”

Reekid said he liked to go to the top of a nearby hill and look at the regenerating* forest if he ever felt sad.

“It is growing back now,” he said. “We are seeing more animals around too. It is still my happy, safe place but it is different.”

CLASSROOM ACTIVITIES
1. Positives and negatives
Reekid’s situation is not the typical life of most 14-year-olds. While we hear lots of positives about his success, he also questions what he might be missing out on. Put yourself in his shoes and make a list detailing all of the things you would find good and bad about leaving regular school to focus on creating YouTube videos. Think deeply about how such a choice might impact positively and negatively upon your life both now and in the future.

2. Extension
What hobby or interest do you have that you could turn into YouTube videos? Create a video or a storyboard showing something you think viewers would enjoy.