This mind-boggling, spinning optical illusion is actually completely still and flat but our brains don’t see it that way 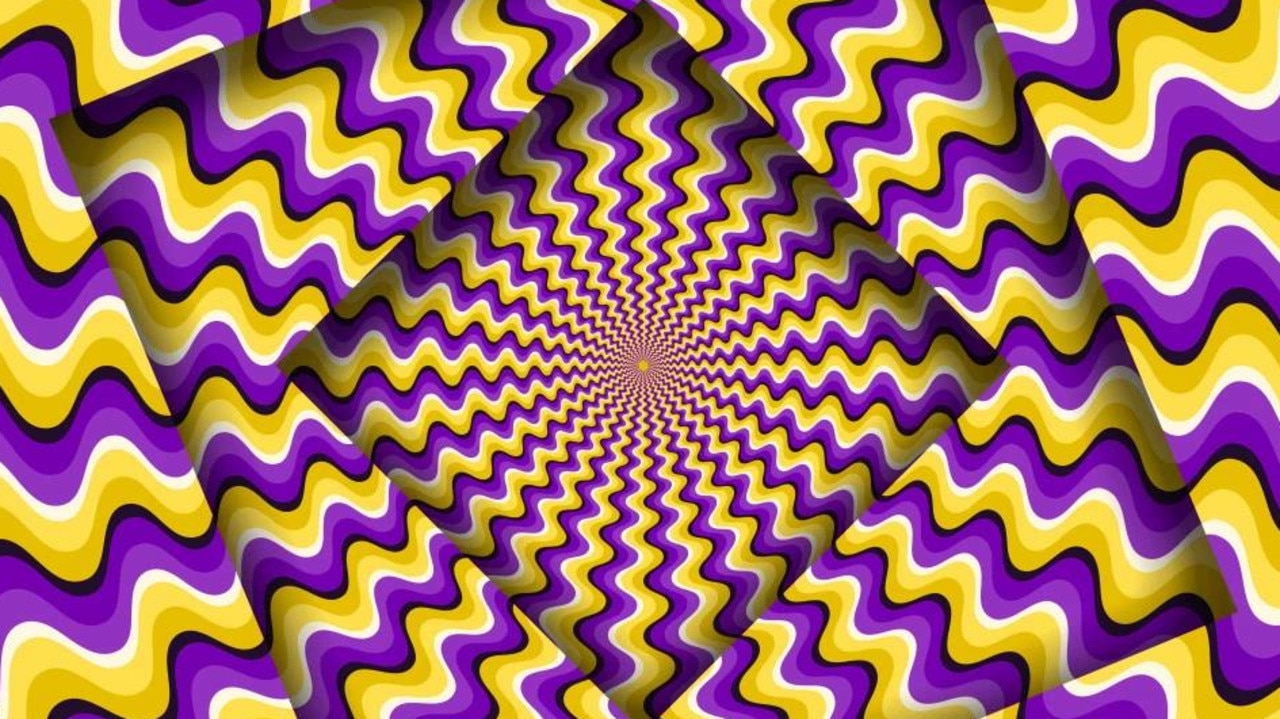 All is not as it seems with this mind-boggling optical illusion. The full picture is below. Picture: Getty Images

This mind-boggling, spinning optical illusion is actually completely still and completely flat. But our brains don’t see it that way.

The purple and yellow waves of this image appear to move anticlockwise, causing some viewers to even feel a little bit sick. 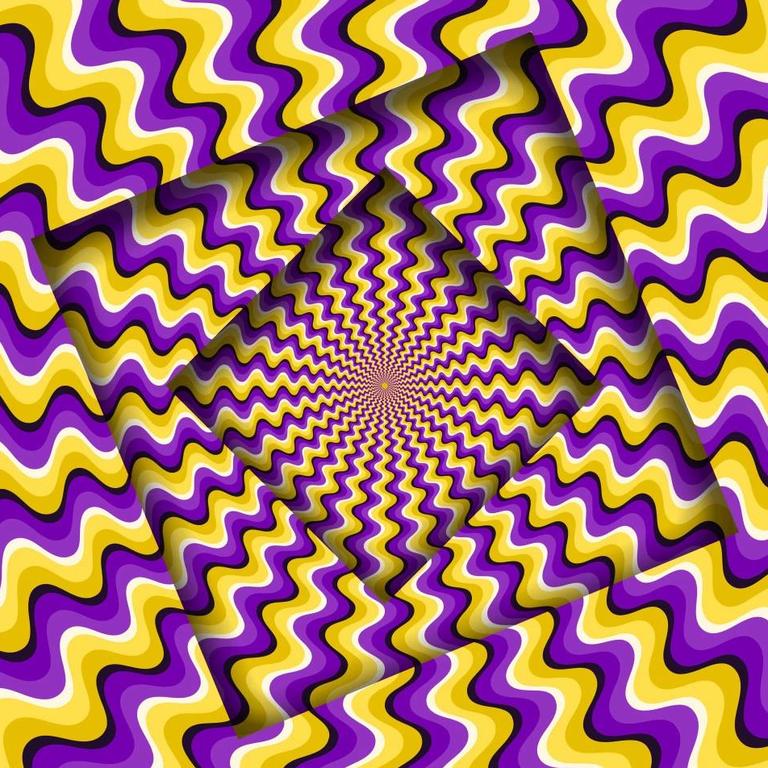 The image is not moving and is absolutely flat! Picture: Getty Images

OPTICAL ILLUSIONS
Optical illusions are combinations of colour, light and patterns creating images that can deceive or mislead our brains into thinking we’re seeing something that’s simply not there.

They’re also interested in whether it’s a mistake that we’re fooled by optical illusions or whether there could be a benefit. It’s just a picture, but it really looks like it’s moving.

HOW OUR BRAINS ‘SEE’ THE WORLD
When we see, the information we gather using our eyes is processed by the brain, but what we think we see is just an idea or perception* of what’s in front of us. It’s not what is actually on the page.

It could help to think of an example. You can think of your own, but for the moment, let’s use an elephant. 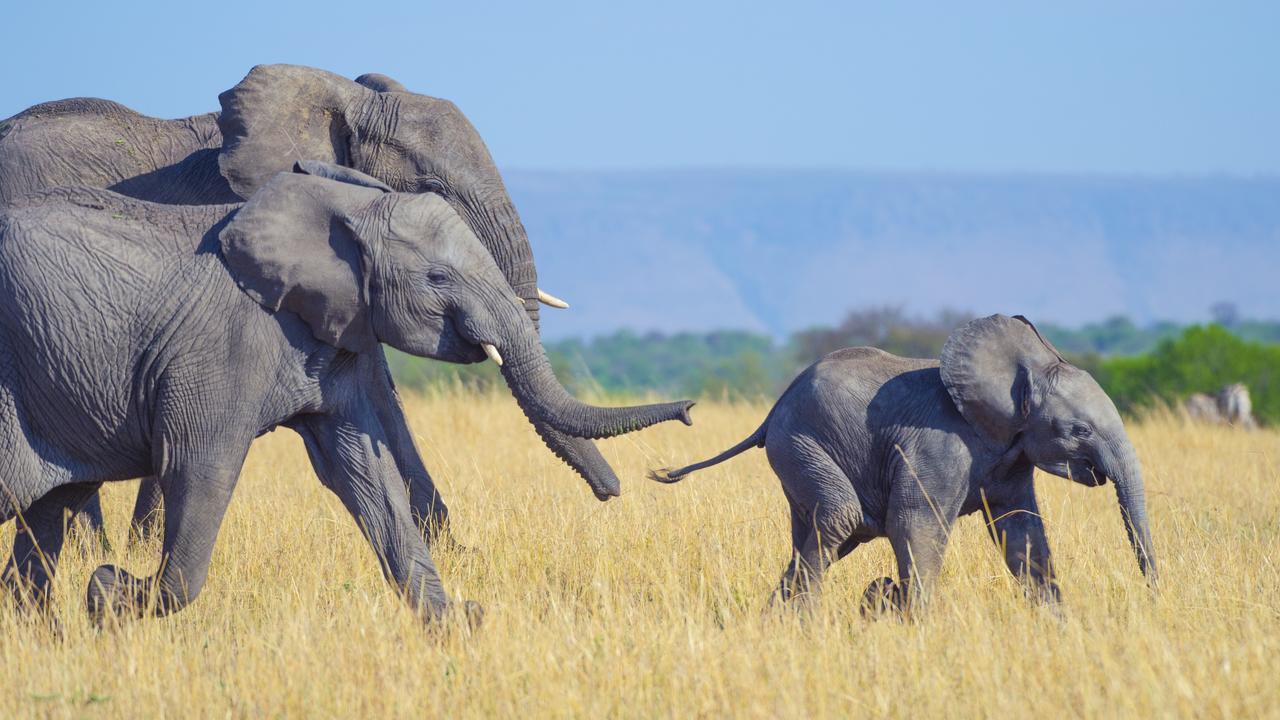 When we see an elephant, we don’t actually get an elephant delivered via our eyes to our brains.

At best, we get some information coming into our eyes about the colour, texture, shape and size of the thing in front of us. If we have some knowledge of elephants, we’ll decide that what our eyes are seeing is an elephant.

Amazingly, we also usually know it’s an elephant even when there’s no real elephant in front of us. A photo, film, a simple black-and-white line drawing or even the word elephant can help us “see” an elephant in our brains.

There’s a lot of complex processing* going on between what the eyes are seeing and what our brain is understanding. It’s no wonder that we’re tricked by optical illusions. A famous optical illusion. How many legs does the elephant have? If you’d like to conquer the illusion, count the legs, rather than just looking at the picture.

No, according to cognitive* sciences professor Donald Hoffman from the University of California Irvine in the US.

In a new book called The Case Against Reality, Prof Hoffman explains the concept that our visual perceptions are not a window on reality, but are an experience constructed over millions of years of evolution.

Using his own research, as well as others’ work in evolutionary biology, game theory, neuroscience*, computer science, information theory, and philosophy*, Prof Hoffman argues that evolution has shaped our perceptions into illusions. Is this a rabbit or a duck? This first appeared in a German magazine in 1892 under the title “Kaninchen und Ente”, which in English is Rabbit and Duck. Research has shown that more people see it as a rabbit around Easter time!

AI AND OPTICAL ILLUSIONS
Scientists at Brown University in the US have also been working on understanding optical illusions and whether they are a weakness or a strength.

“There’s growing consensus that optical illusions are not a bug but a feature,” said Thomas Serre, an associate professor of cognitive, linguistic* and psychological* sciences at Brown and the paper’s senior author. “I think they’re a feature,” he told Science Daily.

The results of some of this research were published in 2018 in the journal Psychological Review.

This knowledge could help make artificial vision — such as bionic eyes — more accurate in the future. Can you see the panda? Picture: Ilja Klemencov

Beach made of millions of pieces of ‘popcorn’

Which do you hear — Yanny or Laurel?

CLASSROOM ACTIVITIES
1. Write an explanation
What is an optical illusion?

Write your own explanation of what an optical illusion is using the information in the article and from other research.

Use an example of an optical illusion in your explanation to help you explain how they ‘trick’ your brain.

2. Extension
Check out some of the optical illusions included in the article and some more that you will find on this site: https://www.optics4kids.org/illusions or from another source.

Can you recreate one of the optical illusions that you have looked at today?

You will need to draw extremely carefully to create the illusion.

Test it out on your classmates or family members.

HAVE YOUR SAY: How do you feel when you look at the coloured illusions? How many legs does the elephant have? Do you see a rabbit or a duck?
No one-word answers. Use full sentences to explain your thinking. No comments will be published until approved by editors.