Yodellers perform in front of a giant Emmental cheese on the final day of the experiment. Yodelling is a traditional Swiss style of singing. Picture: AFP

Playing music to cheese could give it more flavour and hip hop might be better than Mozart, Swiss researchers have found.

Nine wheels of a type of Swiss cheese called Emmental weighing 10kg each were placed in separate wooden crates last September to test the impact of music on flavour and aroma*.

The cheese was exposed 24 hours a day to A Tribe Called Quest’s hip hop track “We Got it From Here”, Mozart’s ‘Magic Flute’ opera or Led Zeppelin’s rock classic “Stairway to Heaven”.

One wheel was played the throbbing* techno* of Vril’s “UV” and another Yello’s dark ambient piece “Monolith”. 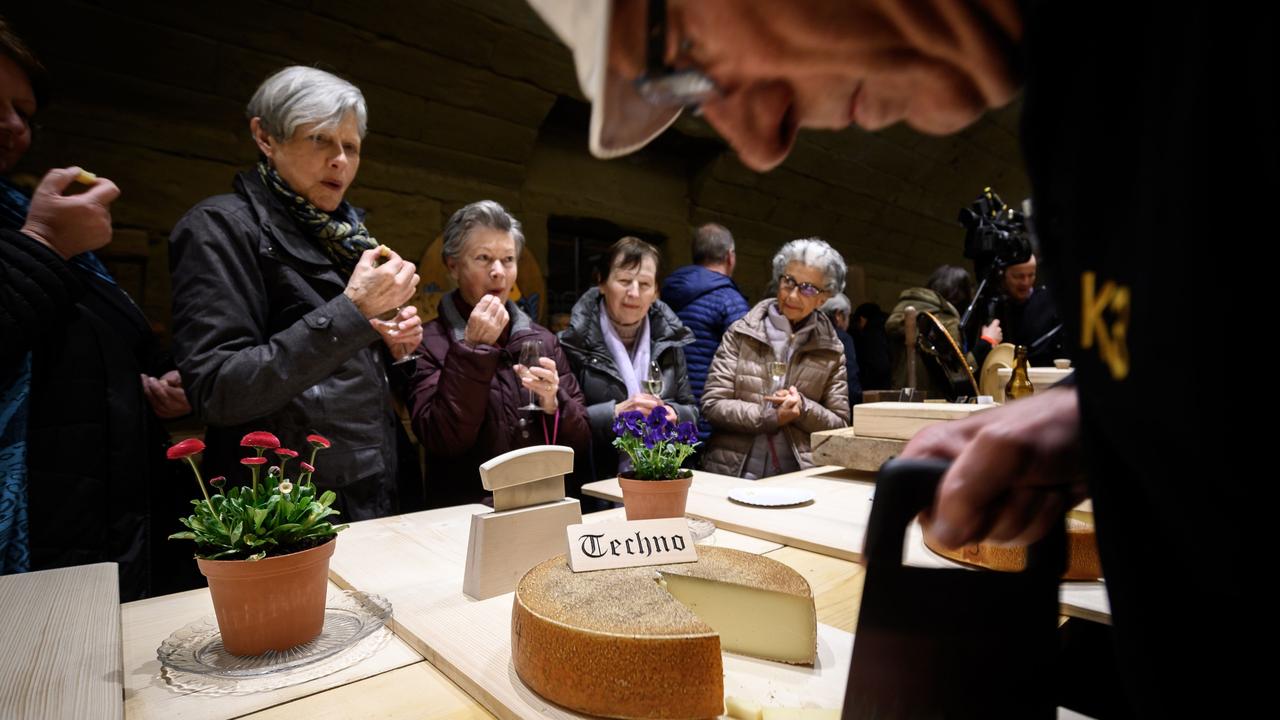 People taste a cheese that has been matured for six months with techno music. Picture: AFP

Soundwaves at low, medium and high frequencies were played for three others while one wheel was left in peace. (An example of lower frequency sound is a deep voice, while a chirpy bird sound is higher frequency.)

“The most obvious differences were observed in strength of flavor, smell and taste,” the Bern University of Arts researchers said.

The flavour, smell and taste was blind tested by a panel of food experts. Blind testing means they couldn’t see which cheese was which.

“The hip hop sample topped the list of all cheese exposed to music in terms of fruitiness … (it) was the strongest of these in terms of smell and taste.” The hip hop cheese, which tasted very different to cheese played other music, or no music at all. Picture: AFP

Benjamin Luzuy, a Swiss TV chef and one of the food experts on the panel, told Reuters TV: “The differences were very clear, in term of texture, taste, the appearance, there was really something very different.”

The experiment, instead of using loudspeakers, used mini transmitters* to conduct the energy of the sound waves of the music into the cheese.

“All the energy is directly resonating* inside of the cheese,” Michael Harenberg of Bern University of Arts told Reuters. The cheeses on the final day of the experiment at Bern University of Arts, Switzerland. Picture: AFP

Beat Wampfler, the cheesemaker behind the project, said the cheeses were tested twice by the panel of experts and both times the results were more or less the same.

He said the experiment would now focus on hip hop.

“The idea is now to take 5 or 10 cheeses and put hip hop on them and then compare.”

What’s wrong with this emoji?

CLASSROOM ACTIVITIES
1. Cheesy Characters
Using the information provided in the Kids News article, create five cheese characters/personalities that represent some of the music pieces played to the cheese and their resulting changes to taste and texture. Think something similar to the current Coles ‘Stikeez’ range. Draw a picture of your cheese, give it a catchy name related to the music it was played and decorate it with some accessories to match its personality and heritage.

2. Extension
Work with a partner and think of some possible reasons as to how on earth music played to cheese could change its flavour and texture?

Do you believe this experiment is producing accurate results?

What other food could you test playing different music to?

VCOP ACTIVITY
Say Cheese!
Pretend you are one of the blocks of cheese. Pick the music you were exposed to and express how you felt about it. What was it like to have their music literally pumped into you 24hrs a day. How did it make you feel? How did it change you? Was the change for the better or worse?

Can you take it a step further to the blind tasting, where you and your friends are taste tested and compared. Who tasted the best? Why?

Use your VCOP skills to really give cheesy you a voice.

HAVE YOUR SAY: Do you think music could change cheese? Do you think this experiment is worth doing or continuing?

No one-word answers. Use full sentences to explain your thinking. Comments will not show until approved by editors.