A German pensioner got quite the fright when he discovered what he thought was an unexploded World War II bomb in his backyard.

The 81-year-old man alerted police who rushed to his home in Bretten, near the southwestern city of Karlsruhe, late last week.
But when police arrived they realised it was actually a large zucchini.

Police said in a statement that officers determined* “the object, which really did look very like a bomb” was actually a 40cm zucchini. 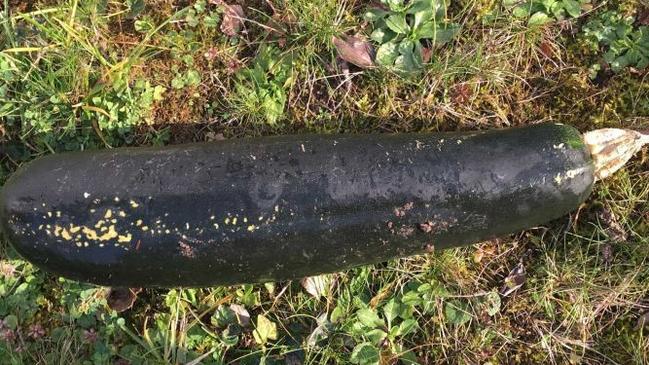 It’s easier to see why the zucchini caused confusion when you compare it to the bomb below. Picture: Karlsruhe Police/AP An unexploded bomb from World War II that was found in London.

The offending* vegetable, which was very dark in colour, weighed about 5kg.

Police believe someone threw it over a hedge into the garden.

Unexploded wartime bombs are frequently unearthed* during construction work in Germany, often forcing authorities to evacuate tens of thousands of residents while they are defused*.

defused: remove the fuse from (an explosive device) to prevent it from exploding

Summarise the article using the 5 Ws.

Extension:
See if you can locate the city of Karlsruhe in Germany on a map.

The article explains unexploded wartime bombs are frequently unearthed during construction work in Germany, which sometimes forces the evacuation of thousands of residents.

Germany was involved in both World War I and World War II.
Write down 10 important facts about each war. These could be dates, battles, countries involved or anything else you think is important.

Extension:
Research Australia’s involvement in either World War I and World War II.
Write down five important facts from your research.

Create a short story about a zucchini or another menacing vegetable causing havoc.

Make sure it has voice and dramatic humour to encourage people to want to read more.