How to draw and animate your very own minion Illumination founder and chief executive Chris Meledandri introduces the lesson on how to draw a minion. Pictures: Illumination

You don’t have to be able to visit a cinema to enjoy a bit of movie making magic.

The team from Illumination, the animation* studio* behind movies including Despicable Me, Minions and The Secret Life of Pets, has put together a step-by-step guide to drawing and then animating* your very own minion – just like in the movies.

The lesson is introduced in a video by Illumination founder Chris Meledandri and demonstrated by director Brad Ableson. Or you can read each step below.

How to draw a Minion

Either way, you’ll find the cheeky but loveable characters that keep Gru on his toes are surprisingly easy to draw.

So sharpen your pencil or have your marker at the ready, and watch your minion come to life.

STEP 1
Take a piece of A4 paper and fold it in half width ways.

STEP 2
Using a black marker or dark-coloured pencil, draw an oval on the front of the paper. For a tall minion, make it a longer oval. For a short minion, make the oval smaller. Step 2: draw an oval for your minion’s body on a piece of A4 paper that’s been folded in half.

STEP 3
Draw in two large eyeballs near the top of your oval, making the eyeballs touch each other in the centre.

STEP 4
Add the minion’s goggles by drawing around the eyeballs, leaving a small space between. Draw two lines on each side of the goggles for straps and colour them in. Step 4: draw the minion’s goggles around his eyeballs.

STEP 5
Draw two pupils in the middle of the eyeballs.

STEP 6
Give your minion a big, happy smile by drawing in a curved line below the goggles. 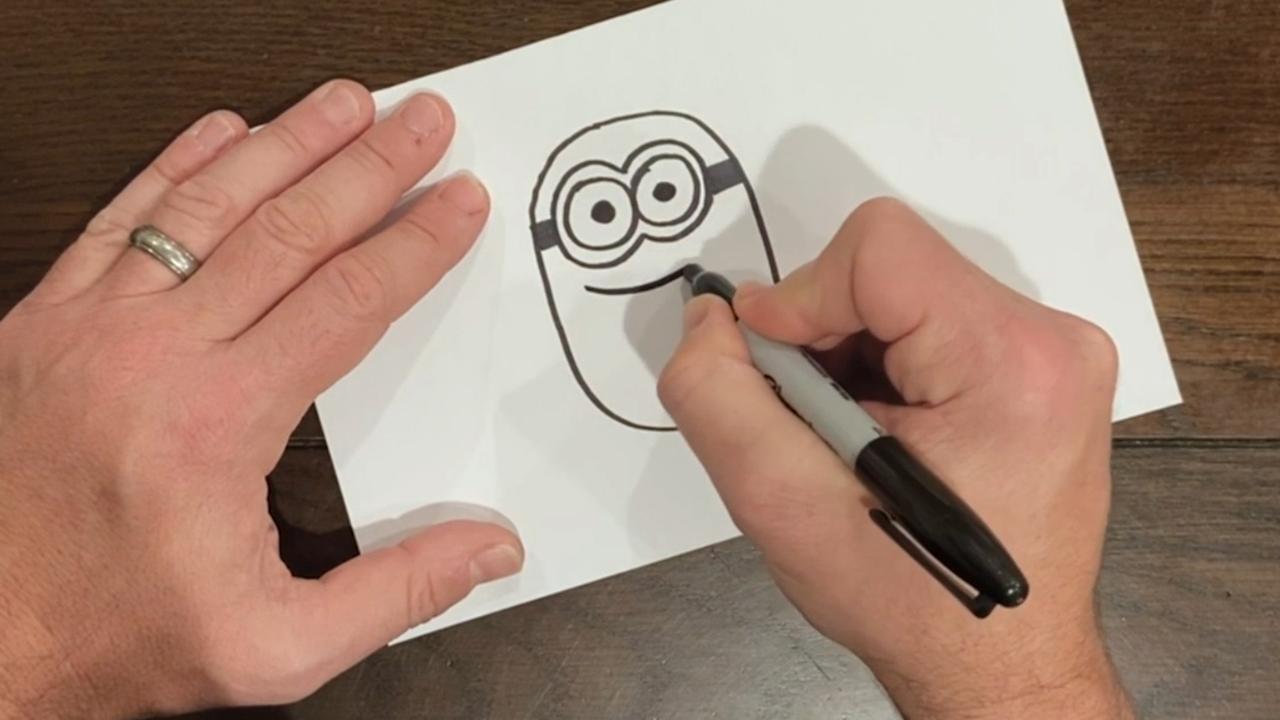 Step 6: Give your minion a happy smile.

STEP 7
Draw two sets of straight lines for legs at the bottom of the minion. Minions have tiny legs, so keep the legs to just a couple of centimetres.

STEP 8
Add a little oval-shaped boot at the bottom of each leg, colouring them in. STEP 9
Their arms are long and skinny, and start about halfway up their body. Draw in two long lines on each side for their arms. Have their arms pointing downwards.

STEP 10
Leave a small space below the first arm and then draw in three fingers. Draw in an upside down triangle-shaped glove sleave between the end of the arm and the three fingers, without connecting the triangle at the narrow point. Repeat on the other arm.

STEP 11
About halfway between the armpit and the legs, draw a line across the minion for his pants. 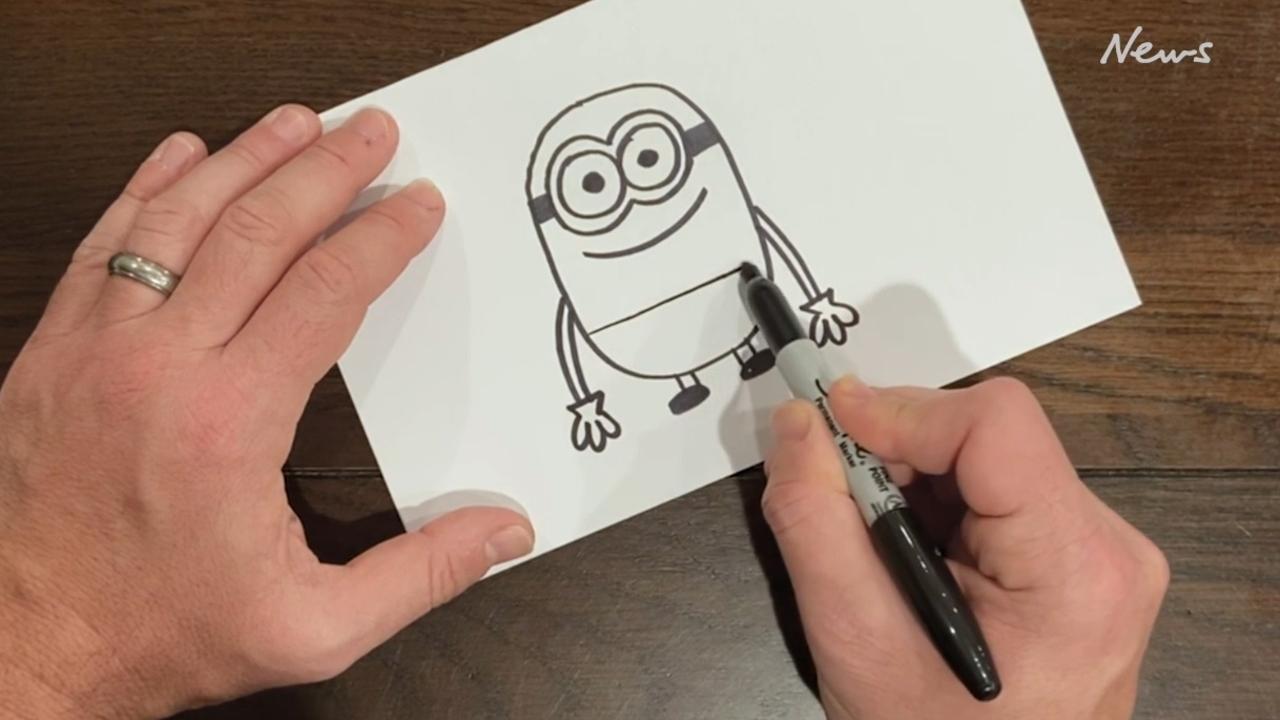 Step 11: start on the minion’s pants. Step 12: add straps and buttons to the pants.

STEP 12
Add two straps from the top of the minion’s first arm to his pants, colouring in a button to connect the strap to the pants. Repeat on the other side.

STEP 13
For the pocket, draw a line between the buttons, just below the top of the pants. Add a U-shape below. If you want your minion to be from the Despicable Me movies, add a capital G to the pocket so you can see it is one of Gru’s minions. If your minion is from the first Minions movie, there’s no need for a G because they haven’t meet Gru yet.

STEP 14
The last step is adding hair. Give him any hair style you want, from spiky to a mohawk to a sleek comb over. Step 14: chose a cool hairstyle for your minion and then he’s done.

STEP 15
To animate your minion, straighten your folded paper and then fold it over the other way, so that the minion you’ve just drawn is under the top sheet.

STEP 16
You should be able to see your minion through the top paper. Trace the outline of the parts of the minion you want to stay the same, but NOT the parts you want to move in your animation.

STEP 17
When it comes to the minion’s pupils, try moving them into the centre of his eyeballs.

STEP 18
Keep his body and hair the same as the first minion, but give him a big, open mouth with his tongue sticking out. Colour in the open mouth. 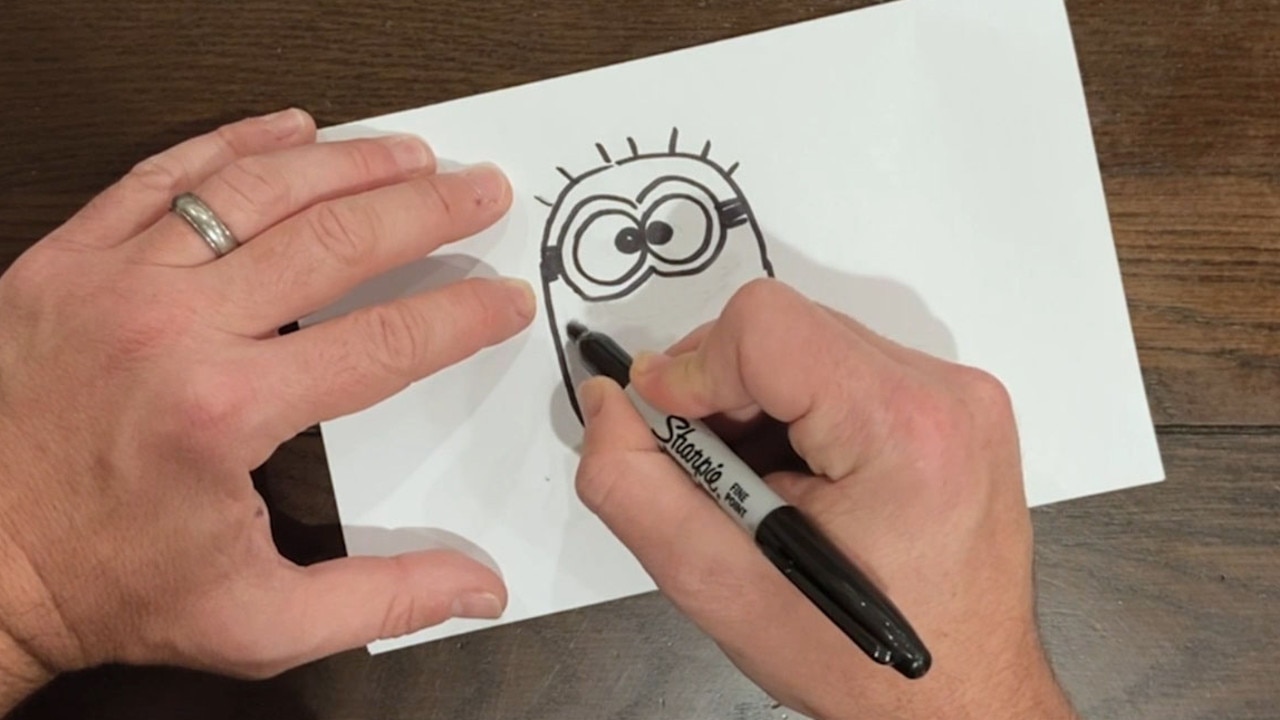 Step 18: give your second minion a big, open mouth. STEP 19
Trace his pants, straps, buttons and pocket the same as the first minion.

STEP 20
Instead of having the legs straight down, move them out to the side like your minion is doing the splits or jumping. 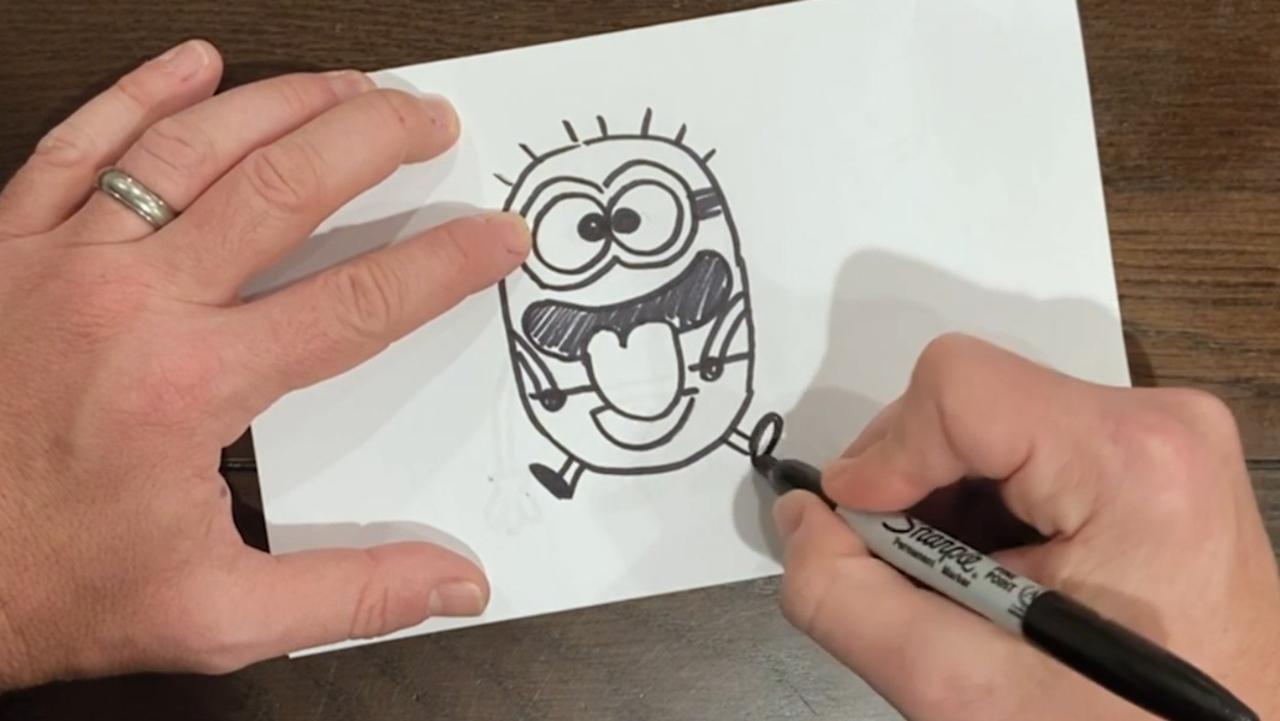 Step 20: draw the second minion’s legs out to the side like he is jumping.

STEP 21
Connect the minion’s arms in the same spot, but instead of going down like the first minion, have them pointing upwards. Draw in the three fingers and glove sleeve on each raised arm. STEP 22
Now let’s have some fun. Hold down the paper at the top with your left hand. With your right hand, pick up the opposite bottom corner and flick the top sheet up and down quickly, so that you glimpse* your first minion for a moment and then your second minion the next moment. This will create the impression* your minion is moving. Step 22: hold down the paper in the top left corner and lift up the bottom right corner. Step 22: pull the top sheet up and down quickly to give the impression your minion is moving. CLASSROOM ACTIVITIES
1. Puppet Play
After you’ve followed the instructions from the Kids News story to draw your own minion, cut one or two of these out and stick them on an icy pole stick. Work with a partner who will also have their own minions on sticks. Create a short 3-5 minute skit (play) between this small group of minions to entertain a prep audience. Your skit should have a purpose and structure or a message to tell (maybe about not leaving rubbish in the yard, or including others when playing etc.) Rehearse your skit and perform to the class.

Vote on the best 3 skits to perform to the prep classes or at a school assembly.

2. Extension
Create your own animated character using some of the drawing techniques used to create the minions. Once you’ve created your character, see if you can make it move through a series of drawings. Give your character a name and personality type.

VCOP ACTIVITY
Punctuation Thief
Pick a paragraph from the article, or about three sentences together if that’s easier, and rewrite it without the punctuation. At the bottom of the page write a list of all the punctuation you stole and in the order you stole it. For example; C , . C .

HAVE YOUR SAY: What crazy hairstyle would you give your minion?
No one-word answers. Use full sentences to explain your thinking. No comments will be published until approved by editors.