Guinness World Records confirmed on February 17 that this 289g Israeli strawberry is the world’s heaviest ever. Picture: AFP

After a year-long wait, a mammoth* Israeli strawberry has entered the record books.

Weighing a whopping 289g, the titanic* berry this week was declared the world’s largest by Guinness World Records. The world’s heaviest strawberry was 18cm long, 4cm thick and 34cm in circumference.

The strawberry was picked on Chahi Ariel’s family farm in central Israel in February 2021. But it was only last week that Guinness confirmed it as the heaviest on record.

“We waited for a year for the results,” Mr Ariel said. “We kept it in the freezer for a year. It’s no longer as pretty as it was.” Israeli farmer Chahi Ariel displays the 289g strawberry found in his field a year ago, which has set a new Guinness World Record for the heaviest strawberry. Picture: AFP

The super-sized strawberry is a local variety called Ilan that tends to grow to a hefty size. Mr Ariel said the record-setting specimen* had shrunk to about half the size it was a year ago.

But the wait turned out to be fruitful. Mr Ariel said he jumped up and down in his car, laughing and singing when he got the news.

“We are very happy to be in the Guinness World Records,” he said.

The Ilan variety of strawberry was originally bred by Dr Nir Dai, a researcher from Israel’s Agricultural* Research Organisation near Tel Aviv, who witnessed the weigh-in and said the berry was about five times larger than a regular strawberry. The record-breaking strawberry is at least five times larger than a regular berry. Picture: AFP

“During this strawberry season in late January and early February it was particularly cold,” Dr Dai told Guinness World Records.

“The strawberry developed slowly for more than 45 days from flowering which caused its large size at full ripening stage.”

While the Ilan variety of strawberry is known for producing large fruits, the cold weather led to a bumper crop of strawberries for Mr Ariel’s fruit farm, producing not just one, but four sizeable strawberries. 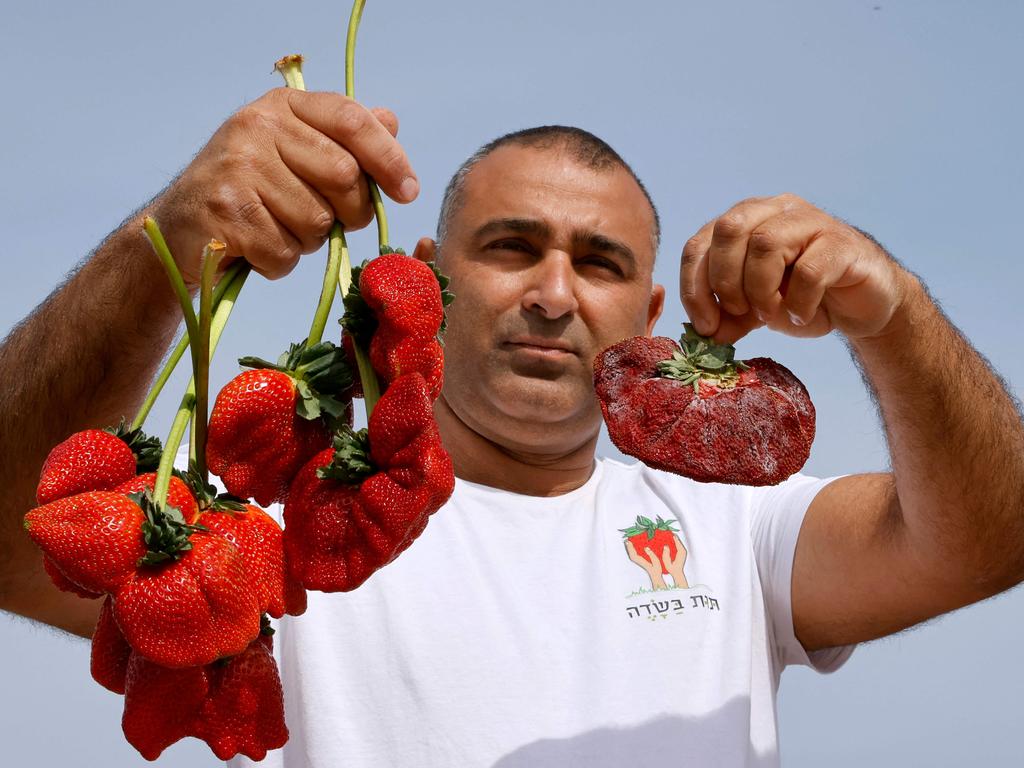 Bumper berries are common with the Ilan strain of strawberry. Picture: AFP

But the world’s biggest ever was put into perspective* when Mr Ariel weighed the record-breaker after weighing an iPhone XR. The iPhone weighed 194g, almost 100g less than the massive strawberry.

The previous record-holder for the heaviest strawberry was a Japanese fruit grown in 2015 in Fukuoka that tipped the scales at 250g.

CLASSROOM ACTIVITIES
1. Strawberry delight
With this size strawberry, you could make some lovely recipes! Share a recipe below for a food item where this giant strawberry could be put to good use. It could be a recipe you know or use (strawberry cheesecake etc) or you can make it up as you go.

Write the ingredients and method for making your recipe below. Perhaps you can give it a try when you get home.

What’s your favourite fact from the Guinness World Record books?

We challenge you to ask the reader a question as your interesting story opener.

Don’t forget you will also need to have a complication and a resolution in the story before thinking of an exciting way to end.

When you have finished, read the story aloud to check if it makes sense. Then highlight your VCOP and see if you can up-level some of the text to make it more engaging.