Even the Sun goes all spooky for Halloween 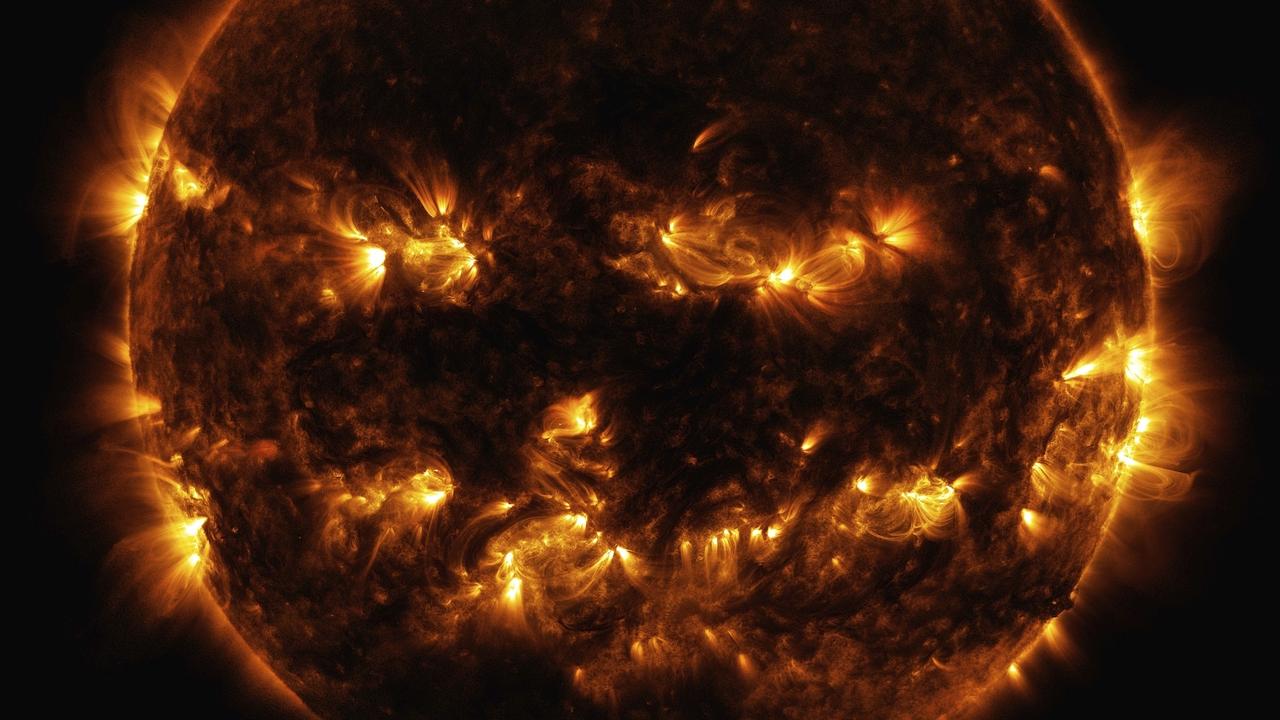 Active regions on the Sun combine to look like a jack-o’-lantern face. The image was captured by NASA's Solar Dynamics Observatory, which watches the Sun from its orbit in space. Picture: NASA via AP

NASA has shown some Halloween spirit by releasing a spooky image of the Sun looking like a jack-o’-lantern with flaming eyes and a creepy smile.

The photo was taken by the Solar Dynamics* Observatory satellite, which has been observing and photographing the Sun since the satellite launched in 2010.

NASA explained that the brighter parts of the Sun we can see in the photo are the active regions that emit* more light and energy.

“They are markers of an intense and complex set of magnetic fields hovering in the Sun’s atmosphere, the corona.

“This image blends together two sets of extreme ultraviolet wavelengths … typically colourised in gold and yellow, to create a particularly Halloween-like appearance.” 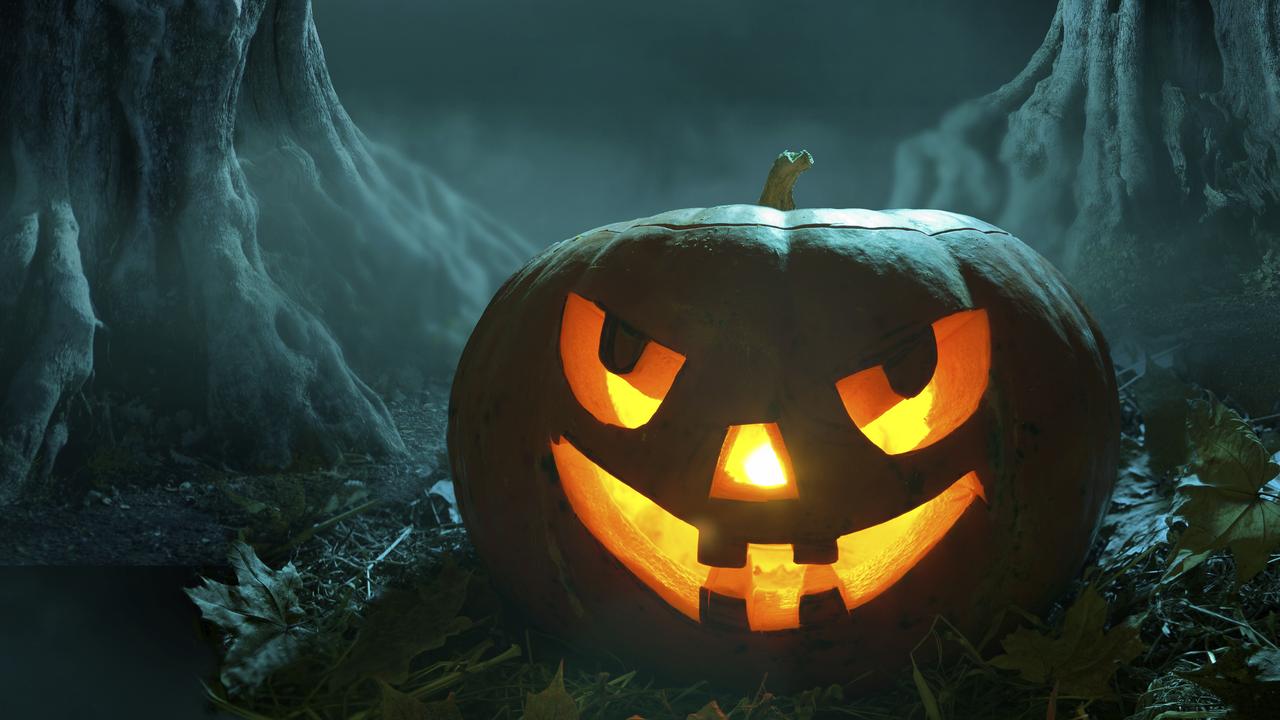 A jack-o’-lantern pumpkin looking pretty spooky in a dark forest at night.

The spooky face was created when activity on the Sun reached ‘solar maximum’, which can result in more sun spots.

These spots can appear as a different colour to the rest of the solar surface.

Activity on the Sun goes through an 11-year cycle, in which it spans from solar maximum to solar minimum and back.

During the maximum periods, sun spots and solar flares increase in intensity.

This results in warmer temperatures on Earth. 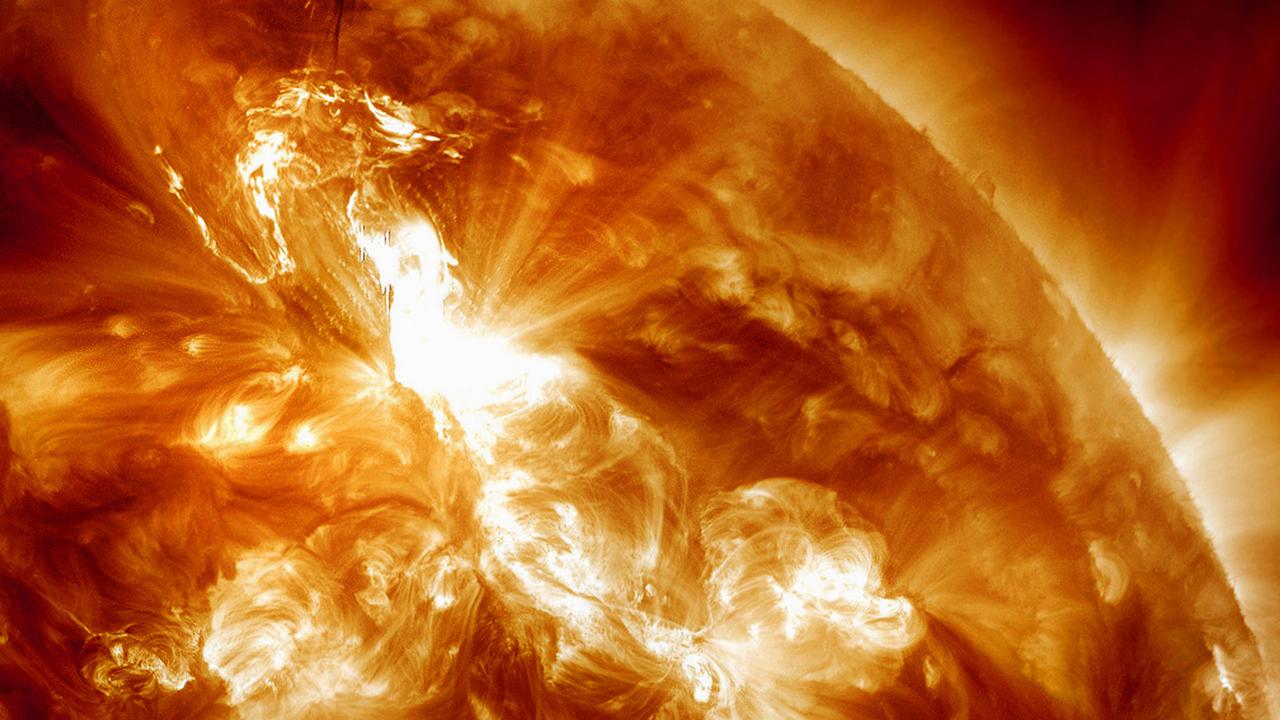 Another solar flare erupting on the Sun, this one in 2012. The radiation from this solar flare arrived at Earth an hour later. Picture: AP/NASA

The space agency commented alongside the jack-o’-lantern-like Sun photo, which was taken in 2014: “Even our star celebrates the spooky season — in 2014, active regions on the Sun created this jack-o’-lantern face, as seen in ultraviolet light by our Solar Dynamics Observatory satellite.” 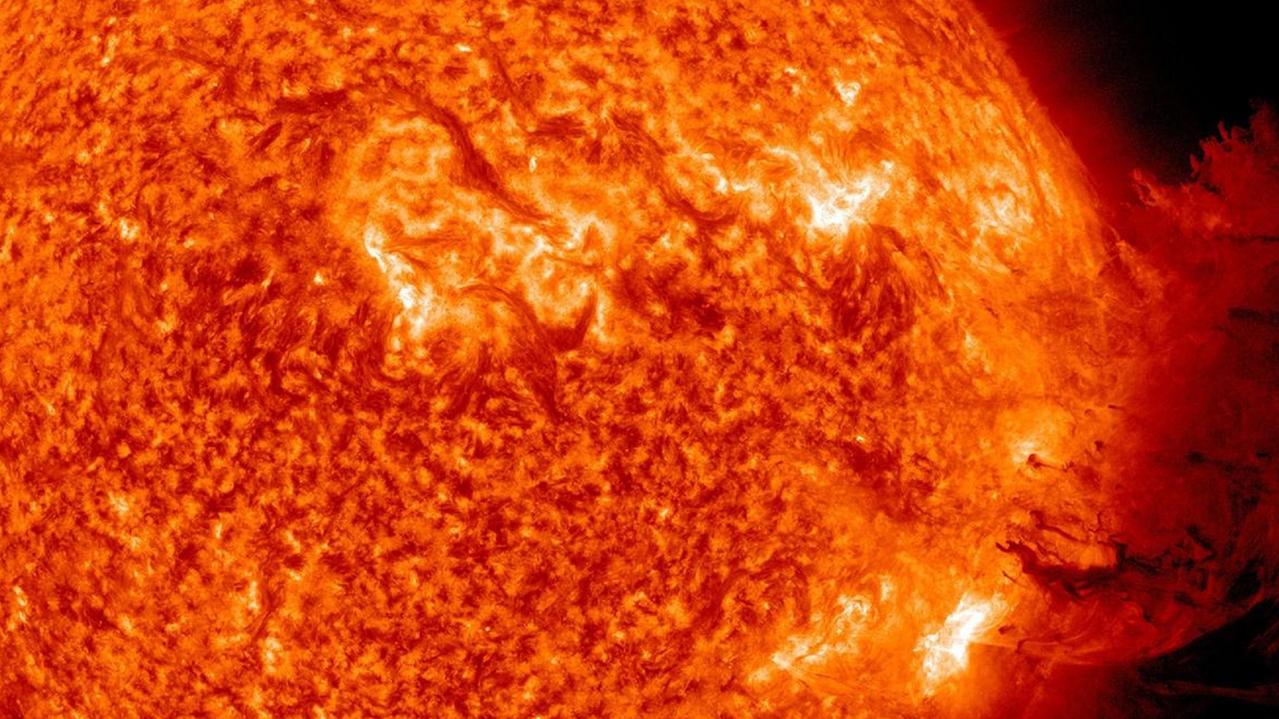 SOLAR FLARES
Earth is sometimes struck by solar eruptions, which are made up of particles hurled from the Sun into space.

Big flares can break down radio communication and power supplies.

The largest observed eruption took place in September 1859 — known as the “Carrington Event”.

If the same solar storm had hit Earth today, we would experience widespread electrical disruptions and blackouts.

Evidence from geological* archives has shown that the Sun might have produced a small superflare in AD 775.

A superflare is an incredibly powerful solar flare that could knock out electricity networks for months or even years.

This article was first published in The Sun and is reproduced here with permission.

HALLOWEEN: NEED TO KNOW
Halloween is also known as Allhalloween, All Hallows’ Eve or All Saints’ Eve.

It is on October 31, the eve of the Christian religious event called All Hallows’ Day, which is for remembering people who have died, including saints.

Halloween is increasingly celebrated in Australia, with supermarket chain Woolworths expecting to sell more than 200 tonnes of pumpkins, 20 per cent more than last year.

Popular costumes this year are characters from recently released scary movies such as Joker and It.

Health experts are warning of the dangers of extreme costume items, such as spooky contact lenses.

“They need to be prescribed and handled with care and the users need to (be) properly instructed how to use them in order to avoid contamination*.

“The biggest risk is when a person goes to bed still wearing the contact lenses.”

Mr Arundel also urged caution if using face paint to recreate, for instance, the look of the character the Joker.

Face paints — as well as glitter and false eyelashes — can cause allergic reactions. Opt for hyper-allergenic versions where possible. 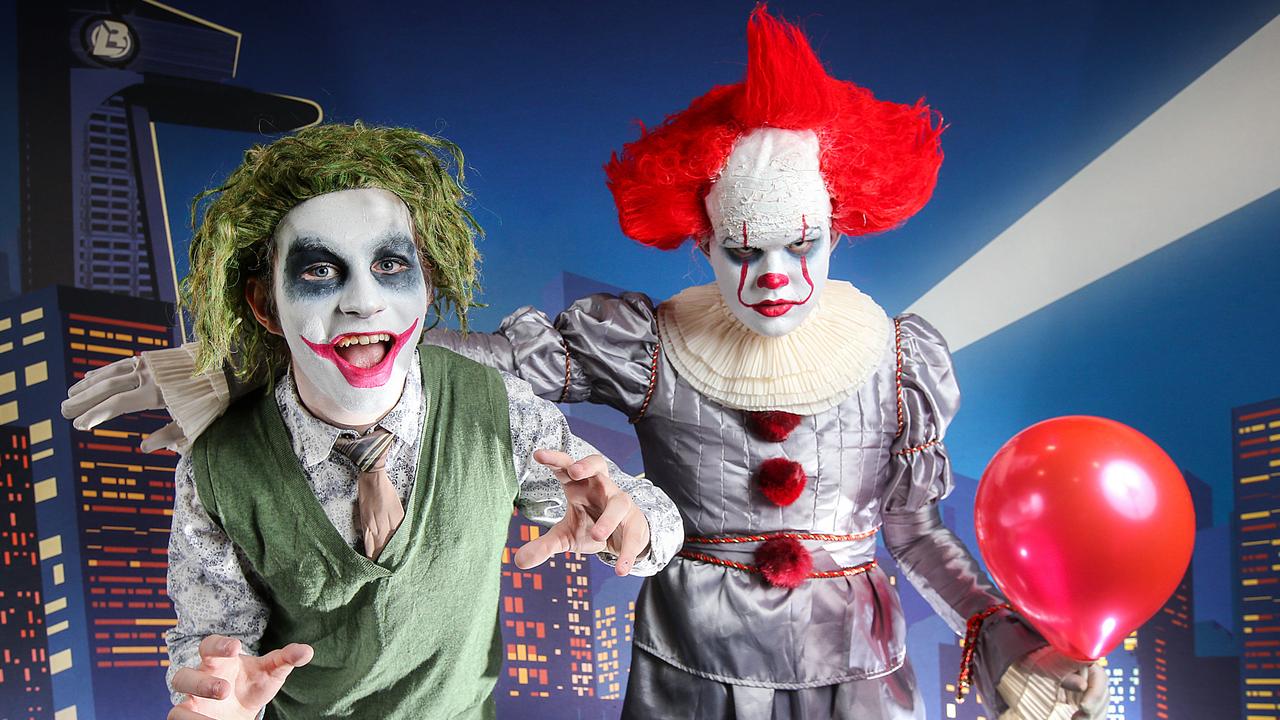 Harry Stott as The Joker from the movie Joker and L.J. Girdlestone as Pennywise from the movie It, both popular characters to dress up as this Halloween. Picture: Ian Currie

CLASSROOM ACTIVITIES
1. Spooky but safe
Create two special Halloween posters. The first poster should help others kids understand the most important and interesting facts about Halloween. The second poster should be on the topic “Be Spooky but Safe.”

2. Extension
“Halloween is an American tradition, so Australian kids shouldn’t celebrate it.”

You may have heard someone say that before.

What do you think? Write a post or a letter explaining why you agree or disagree with this statement. Remember to give lots of reasons and evidence to make your writing very convincing.

To help you complete this activity, you might like to read another Kids News story, also listed in the EXTRA READING section above: Halloween’s hidden history

VCOP ACTIVITY
Spooky Sun
As All Hallows’ Eve approaches and the veil between the spirit world and Earth becomes thinner, signs of evilness start to appear … blink and you might miss the warning signs.

The Sun’s sinister side has already appeared with NASA lucky enough to capture the evidence. But what other spooky incidents have we missed, and what will Halloween have in store for us this year? Will terror and evil reign the Earth?

You need to form a Terror Team that will battle the evil spirits that try and get through the veil between the two worlds.

You will need 5 people to make up the points of the pentagram star to ward off evil.

Who will you choose and why?

Write a paragraph about the spooky incidents you have all noticed and how you will prepare for the night ahead. While the innocent trick or treat, you will save the world from evil once again.

HAVE YOUR SAY: Do you dress up and celebrate Halloween?
No one-word answers. Use full sentences to explain your thinking. No comments will be published until approved by editors.