A British cyclist has set a new world record by travelling around the globe in 79 days.

Adventurer Mark Beaumont rode into Paris on Monday, 78 days, 14 hours and 14 minutes after he set off from the French capital, smashing the previous record of 123 days for a round-the-world bike trip.

He even beat the fictional* exploits* of Phileas Fogg from the Around the World in Eighty Days adventure novel. Fogg took 80 days to complete his voyage by train, ship and balloon in Jules Verne’s 1873 book.

Arriving in evening rush hour traffic under light drizzle, the 34-year-old Brit* rode the last cobbled* stretch to the Arc de Triomphe with a 20-strong entourage* on wheels, including a man in a top hat on a old-fashioned penny-farthing* bicycle. 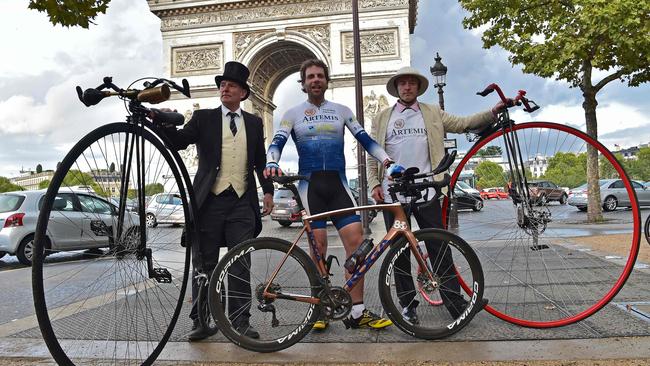 Mark Beaumont with the men who accompanied him into Paris on penny-farthings. Picture: AFP/Christophe Archambault

About 50 supporters were at the monument to greet him, including his wife Nicci and his daughters Harriet, four, and Willa, one.

“I doubt I’ll ever do anything like it again,” Mr Beaumont said, describing the journey as “definitely the longest two-and-a-half months of my life”. A Guinness World Records judge was on hand to present him with his two framed records — he also beat the previous time for the farthest distance cycled in a month — while he was still in the saddle*.

Mr Beaumont set the round-the-world record with 195 days in 2008, before being beaten in 2009 by New Zealander Andrew Nicholson who managed the trip in 123 days, pushing Beaumont back into action.

“I have taken myself beyond anything I have ever done physically and mentally,” he said.

Mr Beaumont was able to fly over the Atlantic and Pacific oceans, but he did the rest with his own muscles. Mr Beaumont started the journey in Paris on July 2 and crossed Europe, Russia and Mongolia before arriving in Beijing.

From there he flew to Perth and then crossed Australia and New Zealand before flying on to Anchorage in Alaska.

His trans-American journey ended in Halifax in Canada, where he boarded a flight for Portugal in Europe.

Mr Beaumont said being the fastest man to cycle round the world has been his dream since childhood.

This is “the culmination* of me as a 12-year-old boy pedalling* across Scotland 22 years ago and going on lots of adventures, going further every time,” he told his followers on Twitter.

But he predicted that his record may not last forever. CLASSROOM ACTIVITIES
1. Map it out

Extension
What date did Mr Beaumont begin and what date did he complete this adventure? What seasons and possible weather conditions could he have faced in each country?

Extension
Work in pairs for this activity.
Imagine one of you is Mark Beaumont and you have just finished this world record effort.
The other partner is a news reporter ready to interview Mr Beaumont as he steps off his bicycle.

Make a list of at least eight questions the interviewer could ask Mr Beaumont and write down some answers you think Mr Beaumont could give.

Practice holding the mock interview a few times and then perform it to your class.

VCOP ACTIVITY
Numbers up!
This article is full of numbers. List them in numerals and then write them in words.
Put them in order from smallest to largest.

Extension: Can you think of any figurative language that could be used to describe Scottish adventurer Mark Beaumont’s journey around the world?
Try to write an example of each — simile, metaphor, onomatopoeia, idiom. personification and hyperbole.

MARATHON MEN IN FOR LONG HAUL