Guinness World Records has declared Dug is not a potato but is instead a tuber from a type of gourd.

A New Zealand couple who believed they had dug up the world’s largest potato have had their dreams turned to mash after scientific testing found it wasn’t a potato after all.

Guinness World Records wrote to Donna and Colin Craig-Brown to tell them their find was actually a tuber, which is a swollen underground stem or root of a plant. And the tuber belonged to a type of gourd, which is fruit with a hard outer skin, such as a pumpkin.

The couple found the tuber in August last year when Mr Craig-Brown was digging in the garden of their small farm near Hamilton, on New Zealand’s North Island. 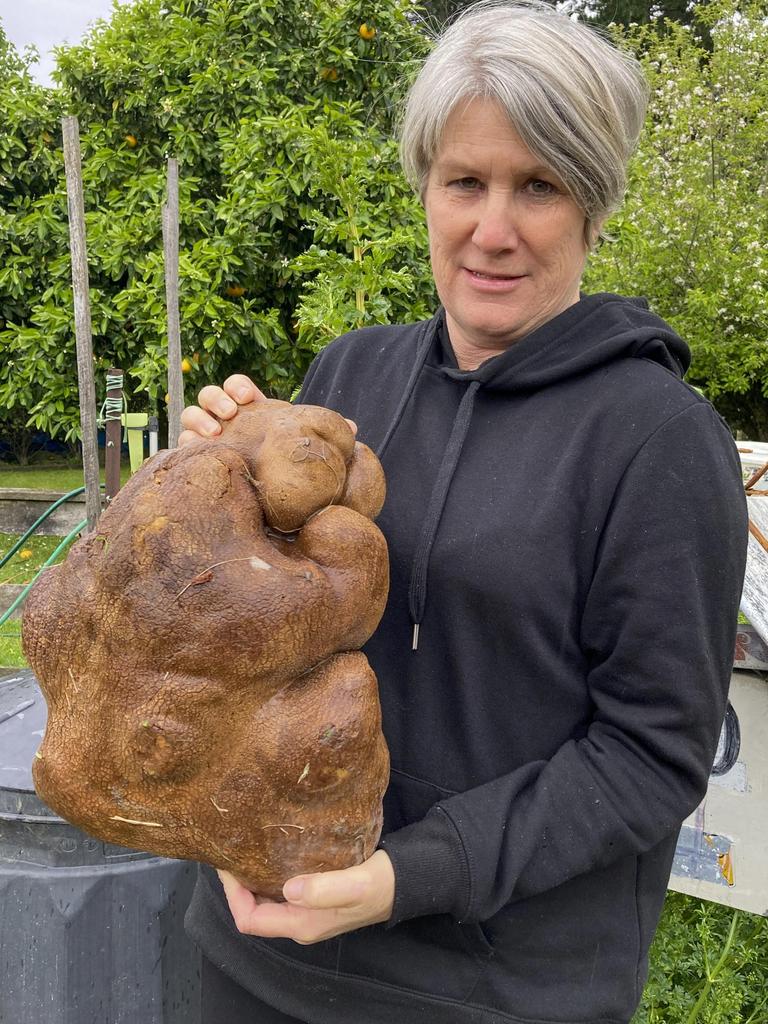 Donna Craig-Brown holds what she and husband Colin believed was a giant potato they found in the garden of their home near Hamilton in New Zealand. Picture: Colin Craig-Brown via AP

They thought the discovery was a potato and named it Doug (but spelt Dug), after the way it was unearthed.

Dug became something of a local celebrity, after the couple began posting photos of it wearing a hat on Facebook and even built a cart to tow it around.

An official weigh-in at a local farming store put Dug at 7.8kg, equal to a couple of sacks of regular potatoes, or one small dog.

Dug was more than 2.8kg heavier than the existing Guinness record potato, a spud that was found in Britain in 2011 and weighed in at almost 5kg. That record stands, now that Dug’s claim on the world record title has been dismissed. Colin Craig-Brown built a cart to tow Dug around.

After months of submitting photos and paperwork, the Craig-Browns got the bad news from Guinness World Records in an email last week.

“Sadly the specimen is not a potato and is in fact the tuber of a type of gourd. For this reason we do unfortunately have to disqualify the application,” the email read.

“I say g’day to him every time I pull out some sausages. He’s a cool character,” Mr Craig-Brown said.

“Whenever the grandchildren come round, they say, ‘Can we see Dug?’

“Dug is the destroyer from Down Under. He is the world’s biggest not-a-potato.”

Mr Craig-Brown said he was not done yet with chasing the potato record. Dug was self-sown* but Mr Craig-Brown said that with all his subsequent* research into giant potatoes, he was ready to try to deliberately grow a record-breaking monster next season.

And this time, it would definitely be a potato.

CLASSROOM ACTIVITIES
1. The story of Dug
The tuber in this story has been given a name by its owners and in some ways has been treated as a living creature. Further develop the character of Dug by writing a story from his point of view. Your story could be an embellished version of what was included in this news article, or a completely new and made up story.

2. Extension
How many different ways can you think of to prepare potatoes? Write down as many as you can in 5 minutes.

VCOP ACTIVITY
Imaginative dialogue
Imagine you were there when Colin Craig-Brown opened the email from Guinness World Records.