Laura and Angus are excited for some trick or treating this Halloween. Picture: Peter Wallis

Ghosts, ghouls, witches and wizards will appear on streets this weekend for haunted Halloween festivities.

But the spooky day of dressing up and trick-or-treating hasn’t always been popular in Australia, nor in the US.

It’s actually an ancient tradition with European heritage dating back thousands of years. An American dressed up as former US President Donald Trump goes for a Halloween surf. Picture: AP

University of Sydney American studies lecturer Rodney Taveira said Australians were increasingly being influenced by the US and the rise of Halloween was part of that.

“Australians, especially younger Australians, are looking to the US with greater frequency* and accessibility,” he said.

“Halloween has become a part of Australian culture and has become normalised by its repeated appearance on American television, film and social media.”

Increasingly, communities are open to the idea of little superheroes and creative characters knocking on doors on October 31.

Research released by Woolworths in 2016 suggested seven in 10 households with kids aged between five and 14 celebrate the event. 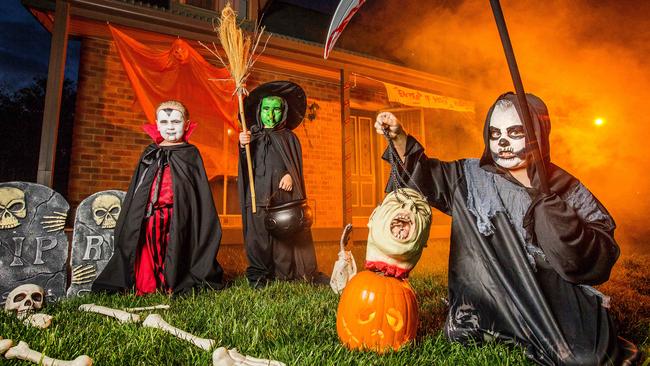 While Australians might look to the US for Halloween ideas, the tradition has far older European roots. 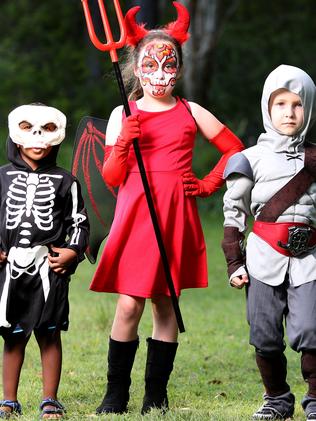 They had a festival to honour the passing souls called Samhain. It involved bonfires and lanterns with faces carved out of large turnips.

Later, the Catholic Church began celebrating All Saints’ Day (also know as Allhallows) on November 1. The day, that included some Samhain traditions, celebrated saints and other people who had died for their religion.

October 31, the night before Allhallows, was named Hallows Eve and later changed to Halloween.

Europeans of the time believed spirits visited Earth on Halloween so they thought if they dressed up like them, the spirits would think they were dead and leave them unharmed. This is where the tradition of dressing up in scary costumes originated.

Towards the end of the nineteenth century, Irish immigrants* brought their Halloween traditions to the US and popularised the spooky celebrations.

Irish people carved turnips or potatoes into jack-o’-lanterns before they arrived in the US and then switched to the larger, brighter pumpkins.

CLASSROOM ACTIVITIES
1. A brief history
Read through the article about Halloween and highlight just the most important parts of the article that tell us about how Halloween evolved over the years.
Use the highlighted information to write a brief history of Halloween in your own words.

Extension:
What do you think about Halloween? Write a convincing reason why Halloween should or should not be celebrated in Australia.

2. A spooky celebration
Imagine you are throwing a Halloween party. Draw a labelled picture of your party that shows how you will decorate, the games and activities your guests will be involved in and the food you will serve.
Write a playlist of songs you will play.
Try to stick to a Halloween theme for your decorations, games and music.

Extension:
It is important that as well as being fun, your party is also safe for everybody there. Come up with three tips or rules for your party that will keep all of your guests safe.

VCOP ACTIVITY
Promo piece
Write an eerie description of Hallows Eve for the local paper to promote their Halloween festival.
The festival will be celebrating a more traditional Halloween so try to think about how it might have been celebrated hundreds of years ago.
Enhance your story with your VCOP.