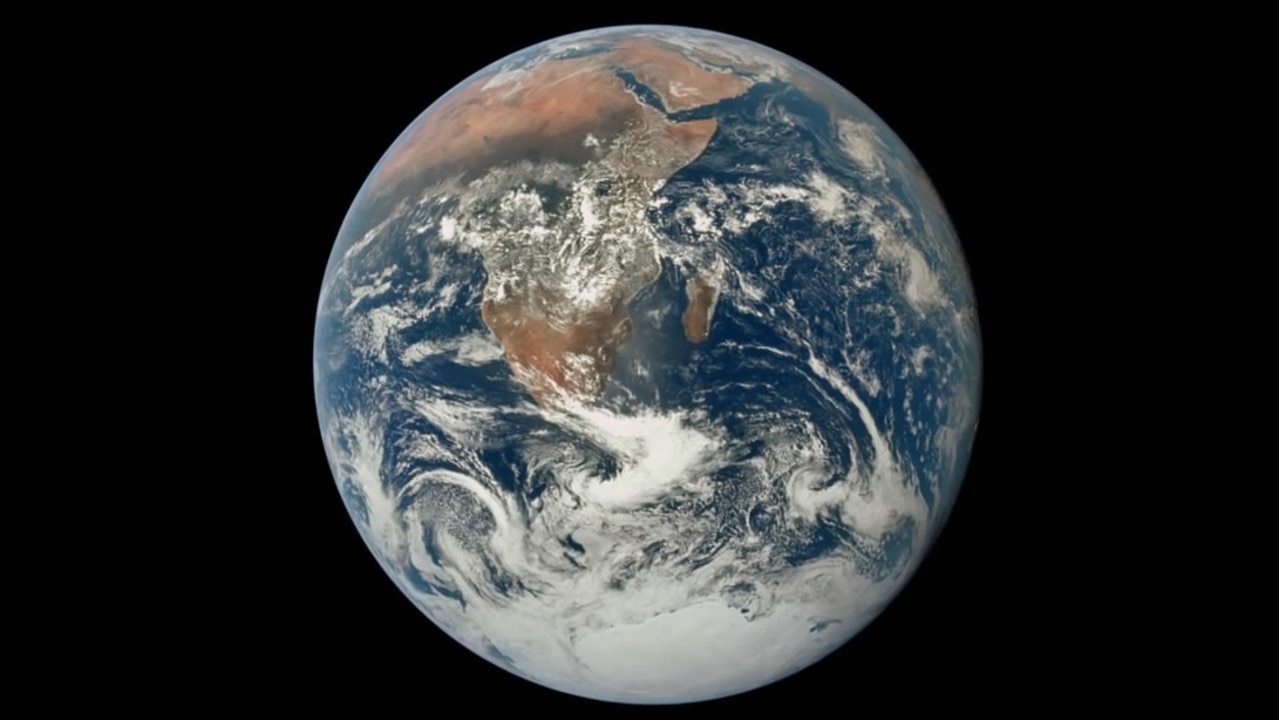 Quentin Valentine has run the same distance as three times around the world.

An Australian extreme athlete has run at least 131,640km. He might have run many more kilometres, but he didn’t count them.

Quentin Valentine set a challenge in Canberra in 1982 with his brother and a friend to see who could run a minimum of 5km a day, every day, until just one man was left running.

One man ran every day for a year and the other ran for three years, but Mr Valentine kept running for 36 years and six days, covering the distance around the world more than three times for no other reason than to test his strength of will*.

“People think I’m addicted but I wasn’t, I didn’t particularly like it,” Mr Valentine said.

“I had this streak* going, so I thought I’ll keep doing it until I can’t.” 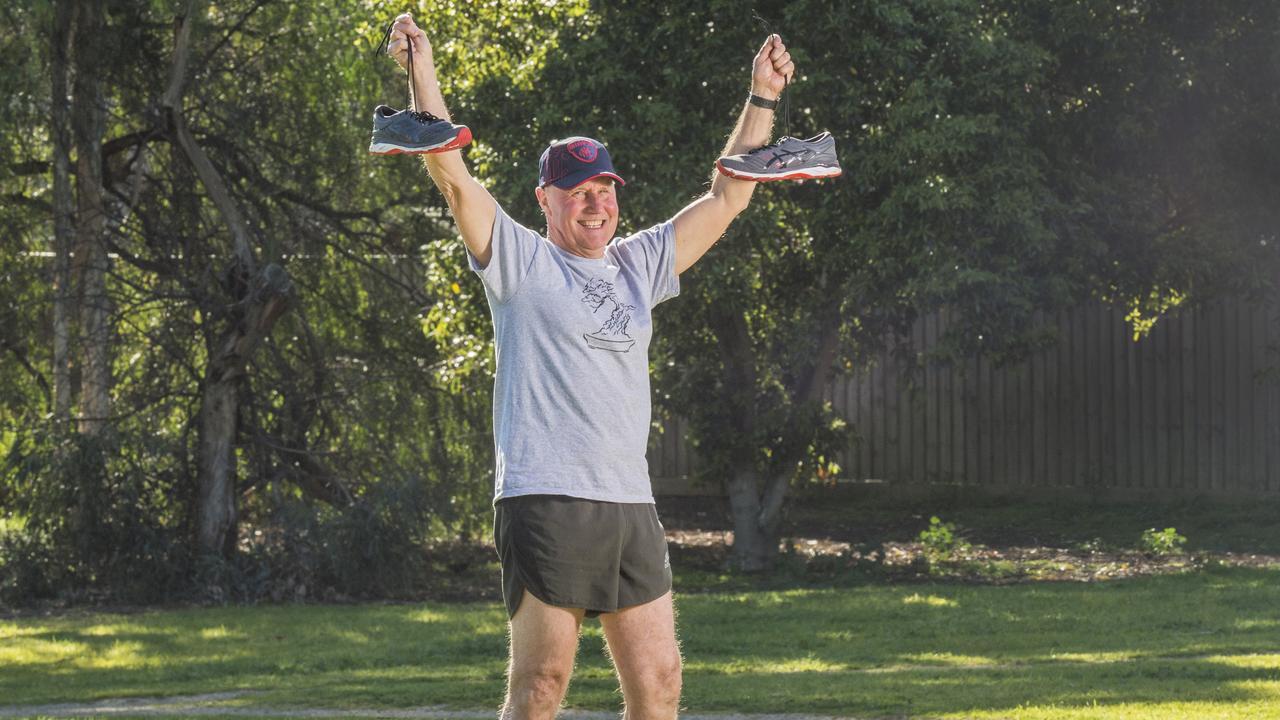 The only rule was that the daily run had to be at least 5km, but Mr Valentine ran farther than that minimum frequently, competing in endurance* races and marathons around the world.

Through rain, hail, and blistering* 49C days, at 2am before a flight, and through multiple injuries, Mr Valentine ran every single day.

In 1983, he ran the Burra to Broken Hill Wheelbarrow relay race that recreated the trek of miners to the Line of Lode mine.

In 49C heat, he and three teammates took turns sprinting for 10 seconds while pushing a wheelbarrow containing 40kg of items miners took with them from Burra to Broken Hill, NSW.

The relay race spanned* 368km over five days. It was the hardest thing he’s ever done. 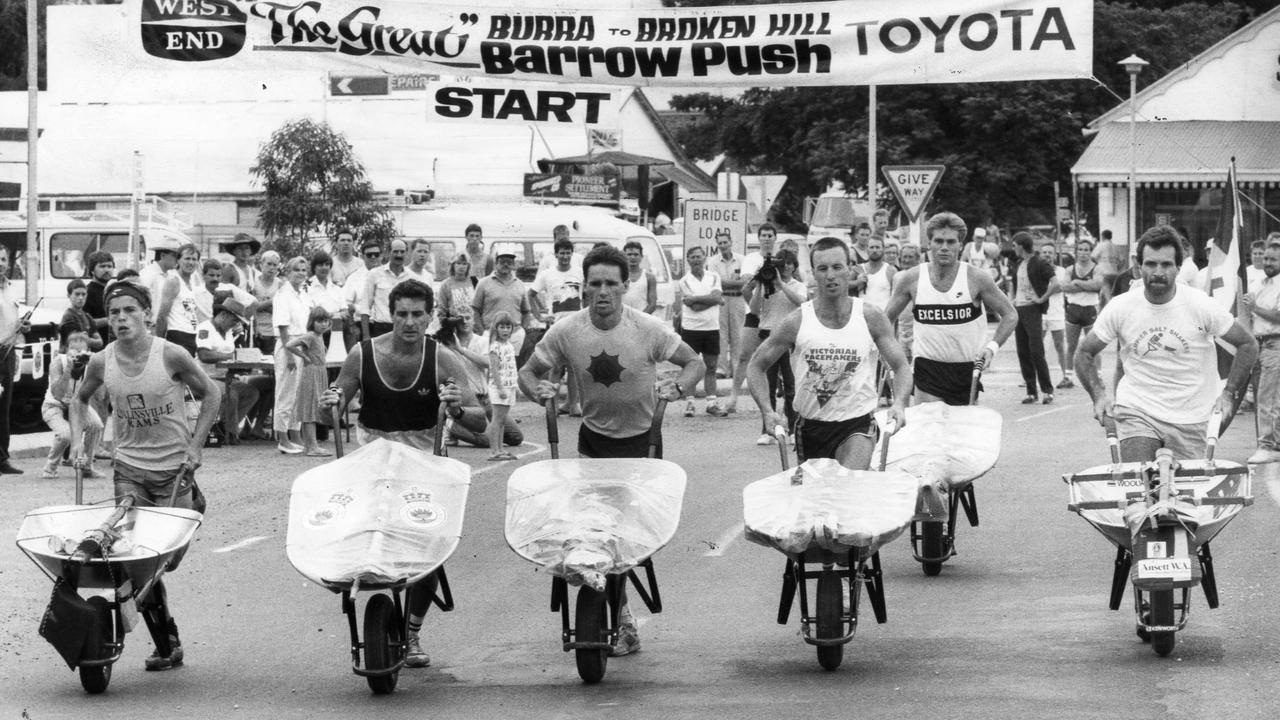 The start of the Burra to Broken Hill Barrow Push wheelbarrow race at Burra, South Australia, in 1988. Mr Quentin ran this tough race in 1983, in the first year of his challenge.

But it wasn’t all medals and crossing finishing lines.

One morning, Mr Valentine slipped his feet into runners that he had left outside, and was bitten by a spider. He ran anyway.

His foot swelled up so much he couldn’t fit it into his shoe the next day.

Instead of taking a day off, Mr Valentine cut slits into the sides of the shoe to widen them and used makeshift* shoelaces to secure his foot. 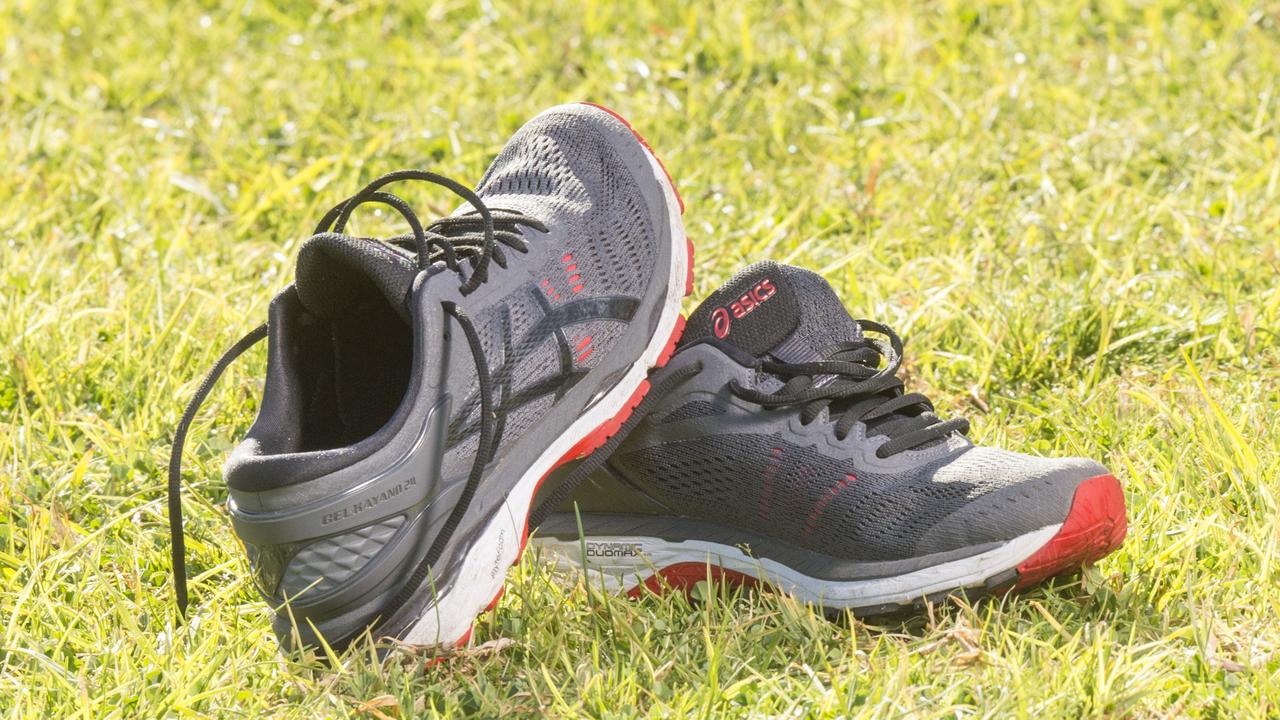 One day Mr Valentine had to cut slits in the sides of his running shoe to fit his swollen foot. He has worn out lots of pairs of running shoes in 36 years but doesn’t use any special equipment. Picture: Rob Leeson.

And on one dark, winter morning, running through the Maribyrnong River Trail in Victoria, he fell into a construction pit.

“I could tell I had hurt my leg but I could keep running, so I did,” he said.

Later that day at work, he felt his pants growing tight down one leg.

“My leg blew up to twice its size.”

The next day he ran. He didn’t visit a doctor, which he now knows was foolish as he could have had serious health problems as a result.

While many runners spend hundreds of dollars a year on the latest wearable technology to track everything from sleep and steps, to energy used and heart rate, Mr Valentine didn’t use technology.

“I always time my races with a stopwatch but that’s it,” he said. Some runners spend a lot of money on fitness technology, Mr Valentine just used a stopwatch to time his runs. Picture: supplied

He wears shorts and T-shirt, no lycra, no compression gear and for all the far-flung* trails he’s run on, the 68-year-old’s favourite place to pound the pavement is the back streets of Essendon, Victoria.

“In the end it was just to get the thing done. I didn’t want to spend a lot of time thinking about where I was running,” he said.

A knee injury earlier this year led to the end of the 36-year, six-day unbroken routine.

In June, Mr Valentine visited his physiotherapist and was told to get orthotics* to help with an ankle injury. But then he started getting knee pain that was too intense to walk through, let alone run through.

On the morning of Wednesday, June 27, barely a few metres from his house, he hobbled* home unable to run.

“I thought I’d wait and see how it felt in the afternoon,” he said.

But it was no better a few hours later, so Mr Valentine decided at the age of almost 70, it was time for the challenge to end.

“I wasn’t devastated but I was disappointed.”

He had no goal to reach, other than going for as long as he could.

“It could be a world record, might not be, I don’t really care.

“The only thing that got me out there was the streak. But that’s over now, and I don’t feel I have to get back into it.”

Once the knee heals, it’s time to start exercising again.

“I think I’ll just do something regular to keep my fitness levels up. No extreme challenges.”

Plan for compulsory PE at school

endurance: sticking with something for a long time

blistering: so hot it could cause blisters

spanned: over that whole time or space

far-flung: a long way away

orthotics: inserts for shoes that help your body move correctly

1. What year did Mr Valentine start the challenge? How many years ago is that?

2. How many kilometres a day did he average, at least?

3. How hot was it when he ran in the wheelbarrow race?

5. What day and date did he finish his unbroken streak?

Quentin’s challenge to run long distances every day is extreme. Think of a sensible, healthy challenge, or “streak” that you and your class could try. Write down what your challenge is, list the reasons why the challenge would be good for you and then create a poster of tips to help you and your friends stick to your challenge.

2. Extension: Imagine that you are Quentin’s doctor. Kids News has asked you to write a post for the site giving your views on what he has done.