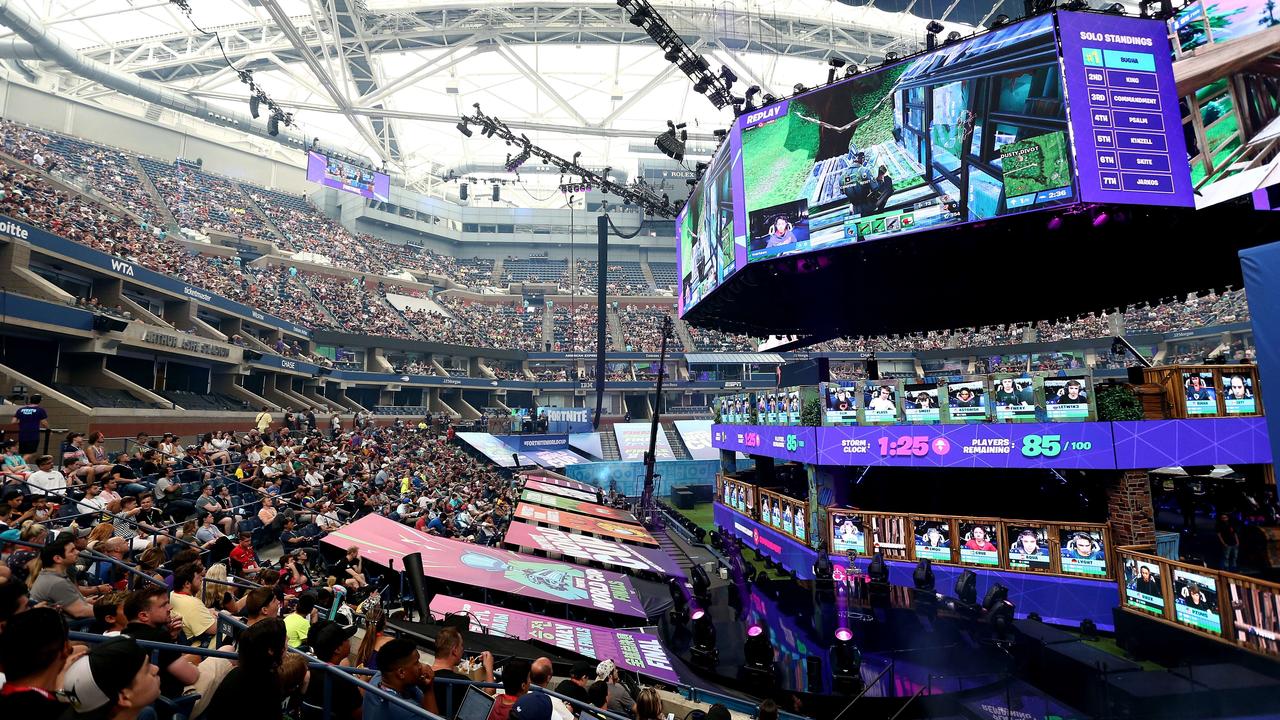 A teenager has collected more than $4.3 million in prizemoney after becoming world champion of the computer game Fortnite.

Kyle Giersdorf, 16, from the US, won the solo event of the competition, held at Arthur Ashe Stadium in New York, US, which is where the US Open tennis tournament is held.

His prizemoney is almost as much as the singles champion of this year’s US Open tennis tournament will win. 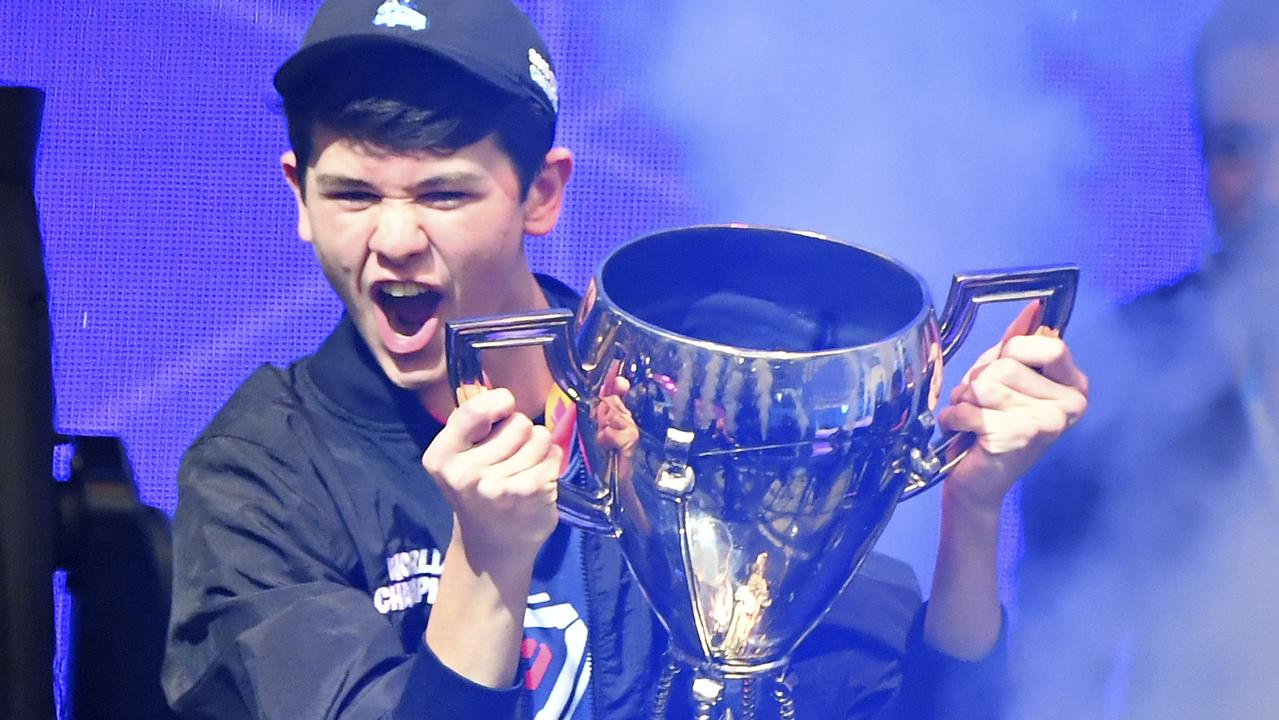 Kyle Giersdorf, who plays as “Bugha”, celebrates with the trophy after his win. Picture: AFP

Kyle’s first prize was part of a $57 million prize pool*, the largest in the history of e-sports.

Kyle, known online as “Bugha”, told the BBC he will buy himself a desk but will save most of his prize. Spectators watch “Bugha”, at the top of the screen to the right of the photo, during the final of the solo competition on July 28. Picture: AFP

Hundreds of gamers — mostly teenage boys — battled it out throughout the tournament. Every competitor who qualified for the event was guaranteed to leave with at least $72,000.

In the game players are dropped onto an island and must try to stay alive while they search for weapons and other resources and eliminate* other players. 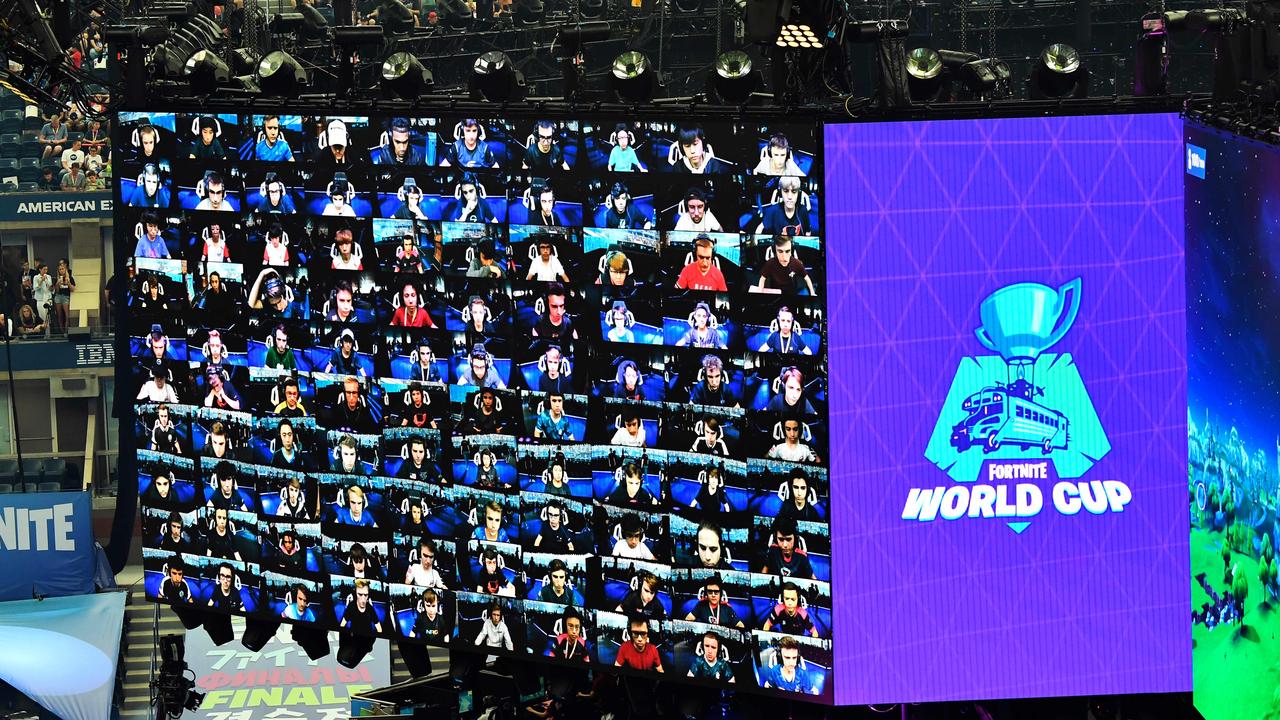 Players are seen on screen during the final of the solo competition at the 2019 Fortnite World Cup July 28, 2019. Picture: AFP

“I don’t know what to say. It’s crazy,” both of the young competitors said, one after the other.

They beat runners up “Rojo” and “Wolfiez”, who also became millionaires, earning $1.6 million each. “Wolfiez” is 15-year-old UK teenager Jaden Ashman and his Dutch teammate is Dave Jong, 21.

Jaden’s mother, Lisa, told the BBC it was “a nightmare” arguing with her son over his online gaming because she wanted him to do better at school.

She admitted to throwing out his Xbox, but has since accepted his decision to be a professional gamer.

Fortnite has more than 250 million users worldwide and more than 40 million players applied to take part in the world championships.

In Australia, Fortnite has an M rating from the Australian Classification Board, which lists “violence” and “online interactivity*” as features for parents to be aware of. An M rating means it is intended for teenagers 15 years and over.

VIDEO: A UK news story from before Kyle’s win and after the duo final, in which Jaden Ashman and Dave Jong were runners up

Harry Potter on a mission to get gamers outdoors

CLASSROOM ACTIVITIES
1. Ratings game
The Australian Classification Board gives ratings to video games, publications (such as magazines) and movies as a guide or legal restriction relating to what age the game, magazine or movie is suitable for.

If a video game, magazine or movie is rated G, PG or M that is a guide for parents.

If it is rated MA15+ or R18+ that is a legal age restriction to access these titles. Therefore a child shouldn’t be able to purchase a MA15+ video game unless they have identification that they are 15 years or older.

Work within a small group of 3-4 students and discuss the following questions. Divide a blank page into four quarters and record the notes from your discussion in the four sections of the table to share with the class.

Conduct a whole class round-table discussion with a spokesperson nominated from each group.

What is the overall consensus from the questions above?

2. Extension
Create some survey questions based around the questions and topics discussed as a class above. Survey your classmates to gain some data and represent your findings in a graph to share with the class.

VCOP ACTIVITY
Playing to win!
Imagine becoming a millionaire just by winning a video game! It would have to be a lot of kids’ dream come true. But everything comes at a cost.

Make a list of pros and cons and what it would take to become good enough to win a championship like this. Don’t forget to include the sacrifices to friends and family as well, it’s not just you who will is affected but everyone around you as well.

Once you have your list, pick your 3 most powerful indicators and turn them into a persuasive text. Try and convince yourself, and others, that it is either a good or bad idea by using your writer’s voice.

HAVE YOUR SAY: What would you do with the prizemoney if you won? Do you think Fortnite is suitable for children? Why or why not?
No one-word answers. Use full sentences to explain your thinking. No comments will be published until approved by editors.