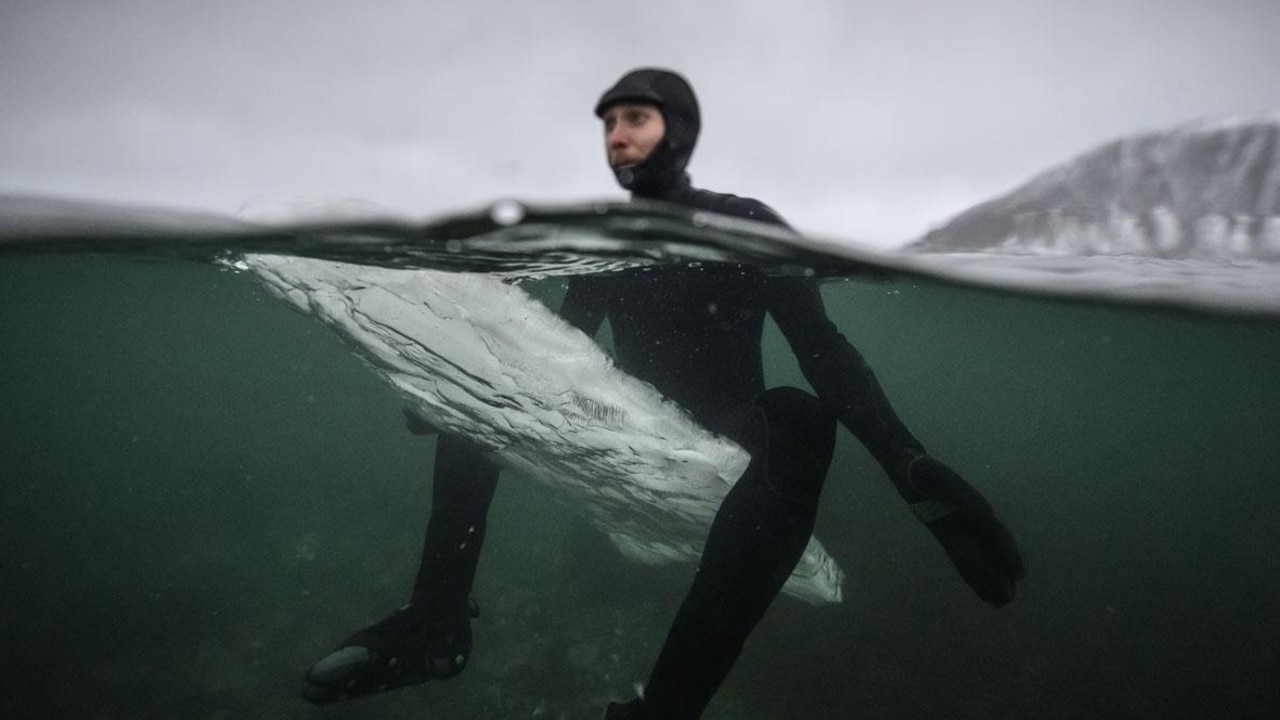 Swedish surfer Pontus Hallin waits for waves as he sits on his melting ice surfboard at the Delp surfing spot, near Straumnes, in the Lofoten Islands. Picture: AFP/Olivier Morin

A group of extreme surfers has invented an even more extreme version of their sport: iceboard surfing.

The surfers, who surf all year around Unstad, in the Lofoten Islands, Norway, which is above the Arctic Circle*, hang about in the water when it’s minus 10C. That temperature often feels like minus 25C with wind chill* taken into account.

In what is believed to be a world first, they set out to challenge themselves even more than usual by making their surfboards out of ice.

To the surfers, it felt like the ultimate no-waste, eco-friendly solution for a location that is iced up for 10 months of the year. When the day’s surfing is done, the board melts into the sea.

Photographer Olivier Moren, who surfs with the group, was there to document* their experiment.

Six surfers and four of their friends set to work.

For their first attempt, they cut ice chunks out of frozen lakes, which didn’t work. Mattias Hornquist and Pontus Hallin shape a board out of ice. Picture: AFP

Then they made moulds out of plastic and wood and filled those with freshwater, which is stronger when frozen than frozen salt water. They added seaweed for grip, plus some other things, just for fun. A cod’s head is set up for decoration in an empty mould along with seaweeds used as grip. Picture: AFP

Then they left the boards inside a fishery* in a room where it was minus 25C for two days. And then they took them to the waves.

They spent four days trying out the boards, hauling* the 70kg creations to the water. It took three people to lug a surfboard made of ice to the water at the Delp surfing spot, near Straumnes, in the Lofoten Islands. Picture: AFP 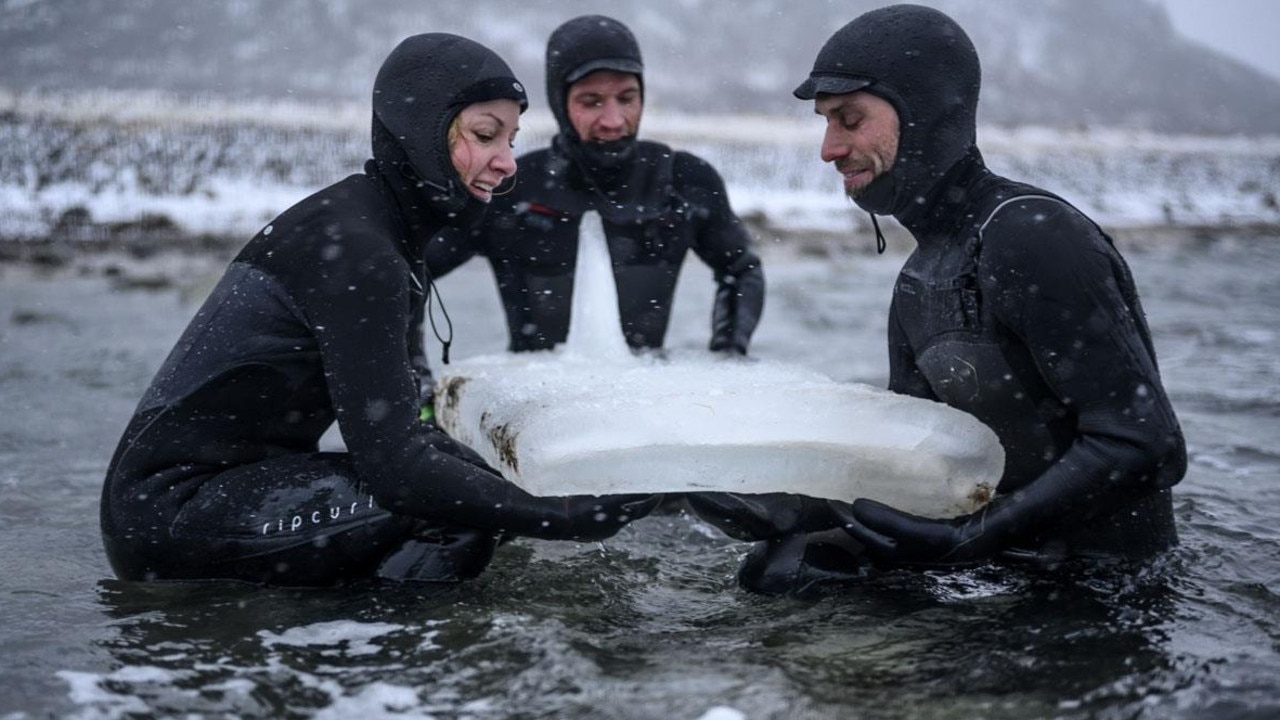 The surfers had to work quickly to use the boards before they melted. Picture: AFP

They found that the boards lasted about 30 minutes in the ocean, where the water was about 3C, before it all melted away.

Out of those 30 minutes, there were only about five during which the board was in good shape for surfing. The trick was catching a good enough wave during those five minutes. The waves needed to be strong — not large, but strong. To get enough speed, they needed a few people pushing the board in the water, instead of the lone surfer just paddling. The reason is both the size and weight of the board and because the waves at this location are wind waves, which aren’t as powerful as swells*. 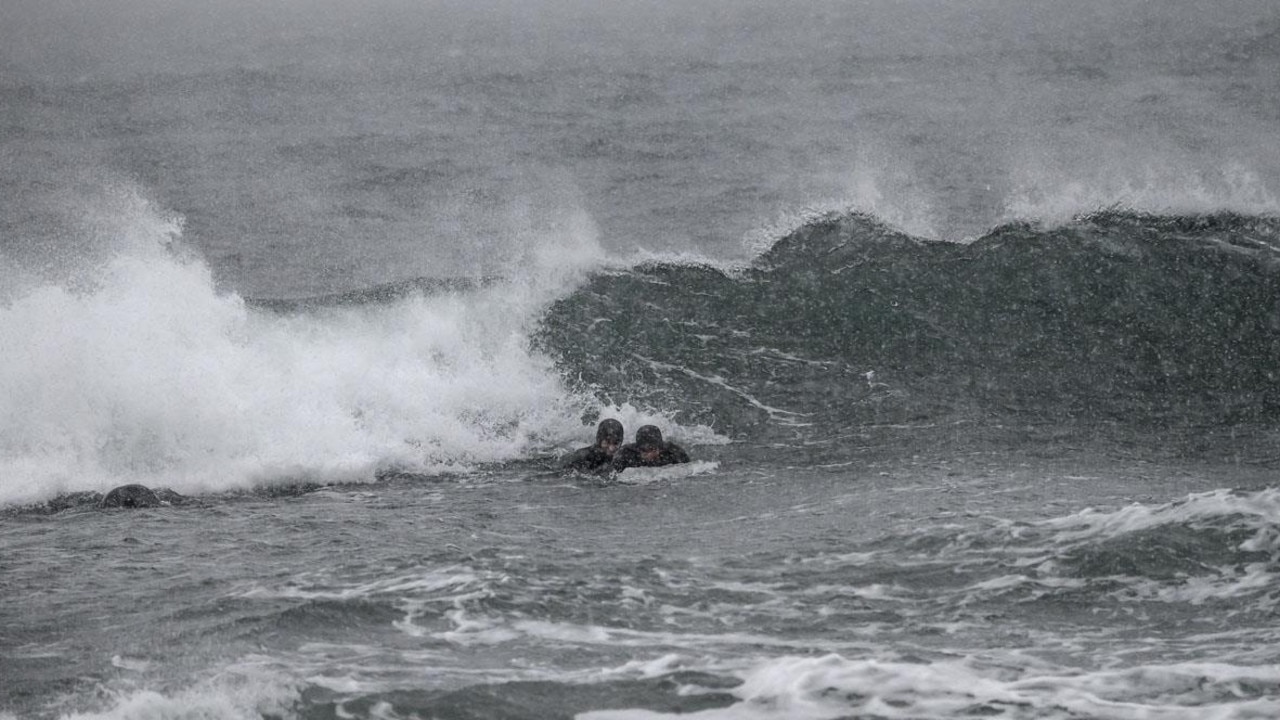 Swedish surfers Pontus Hallin and Lisa Blom attempt to take off with a surfboard made of ice. Picture: AFP

This type of surfing can be much more dangerous than surfing with regular boards. If you fall and get hit on the head with a 60-70kg piece of ice, that can hurt.

The one definite conclusion after four days of trial and error is that it can absolutely be done. They will adjust their techniques and return to try again. Photographer Olivier Morin walks out of the water after documenting the surfers’ experiments. Picture: courtesy of Olivier Morin

This is an edited version of a blog by Olivier Moren and Yana Dlugy for AFP.

VIDEO: Australian Mick Fanning surfs in Norway in 2016 under the Northern Lights, near where the Norwegian surfers tried out their ice boards. Credit: Red Bull Content Pool

MORE ECO-FRIENDLY SURFING
An inventor has made a surfboard out of 700 takeaway coffee cups.

His creation has earned him second place in an innovation contest in the US.

Mr Nolan also used more than 30 plastic straws and other materials in his board. Most cups came from family members who gave them to him, though he picked up some from the roadside.

Mr Nolan compressed the raw materials together and finished the board using bamboo and epoxy, a type of resin. Korey Nolan with the surfboard he made using hundreds of Dunkin’ Donuts coffee cups and other single-use materials. Picture: AP

CLASSROOM ACTIVITIES
1. Create Your Own!
What’s your favourite sport? How could you make it more eco-friendly? Design a piece of equipment used in your sport that is eco-friendly, like the iceboard or the coffee-cup board. Write a description of how you will make it, what you will make it from and why it’s better for our environment.

2. Extension
The iceboard surfers have taken a sport and made it extreme. Think about the sport you chose in the first activity. Make it extreme! Write the rules and design a poster advertising your new, extreme sport.

HAVE YOUR SAY: Help the inventors by giving your suggestions for how they could improve their designs. Share any new ideas you have for surfboards.
No one-word answers. Use full sentences to explain your thinking. No comments will be shown until approved by editors.