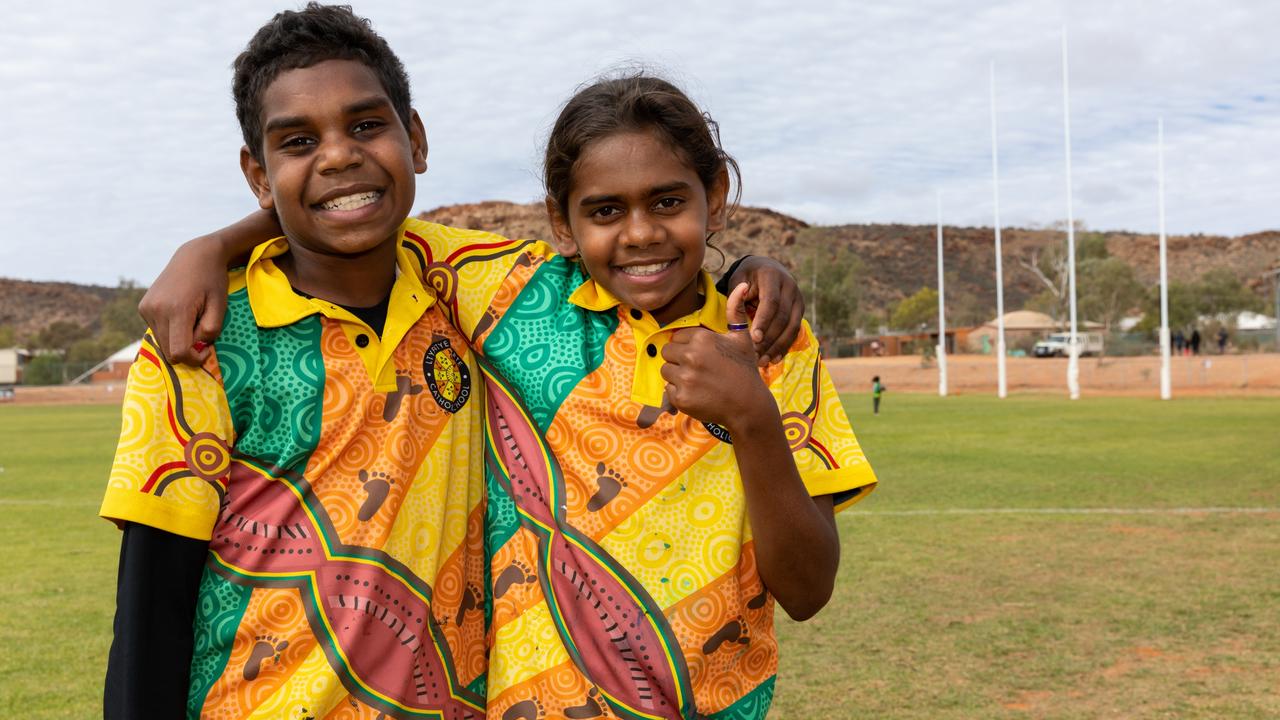 Ashley Smith, 11, and Latahnia Anderson, 10, approve of the new grass at Santa Teresa Oval which used to be red dirt and rocks. Picture: Emma Murray

Twenty-two children line up between miniature posts, waiting for the goal umpire’s signal.

As soon as she waves her flags, the youngsters take off from inside the centre square.

Most in sneakers, some in bare feet, almost everyone in a football guernsey.

All of them running about 60m across grass towards much taller goalposts, the same as those at the MCG.

This is new for the remote Northern Territory community of Ltyentye Apurte (or Santa Teresa), 80km southeast of Alice Springs.

The oval had long been dirt, made up entirely of clay and covered in small rocks.

But over the past two years, the ground has transformed from reddish brown to green.

Dubbed the MCG of the Desert, it is now the only fully grassed oval in a remote central Australian town and its colour is striking in an otherwise arid* landscape. The oval is now known as the MCG of the Desert after grass was planted on the surface. Picture: Supplied

The resurfacing project has been a partnership between Melbourne Football Club, Melbourne Cricket Club, the AFLNT, the Northern Territory government and the area’s traditional owners, the Eastern Arrernte people.

Santa Teresa’s oval was officially relaunched on June 3 in an event attended by most of the town’s 500 people.

To the local community and the Demons, it was the culmination* of a dream years in the making.

For primary school student Latahnia Anderson, the winner of the race from the miniature posts to the AFL standard ones, the oval ticks all the boxes.

“We used to play when it didn’t have grass and it was a bit hard and boggy because of the sands.

The highlight of the ground’s relaunch, which fell in the middle of the AFL’s Sir Doug Nicholls Round and News Corp Australia’s Indigenous Sport Month, was a football match between two sides from the community’s only club, known as Ltyentyies. 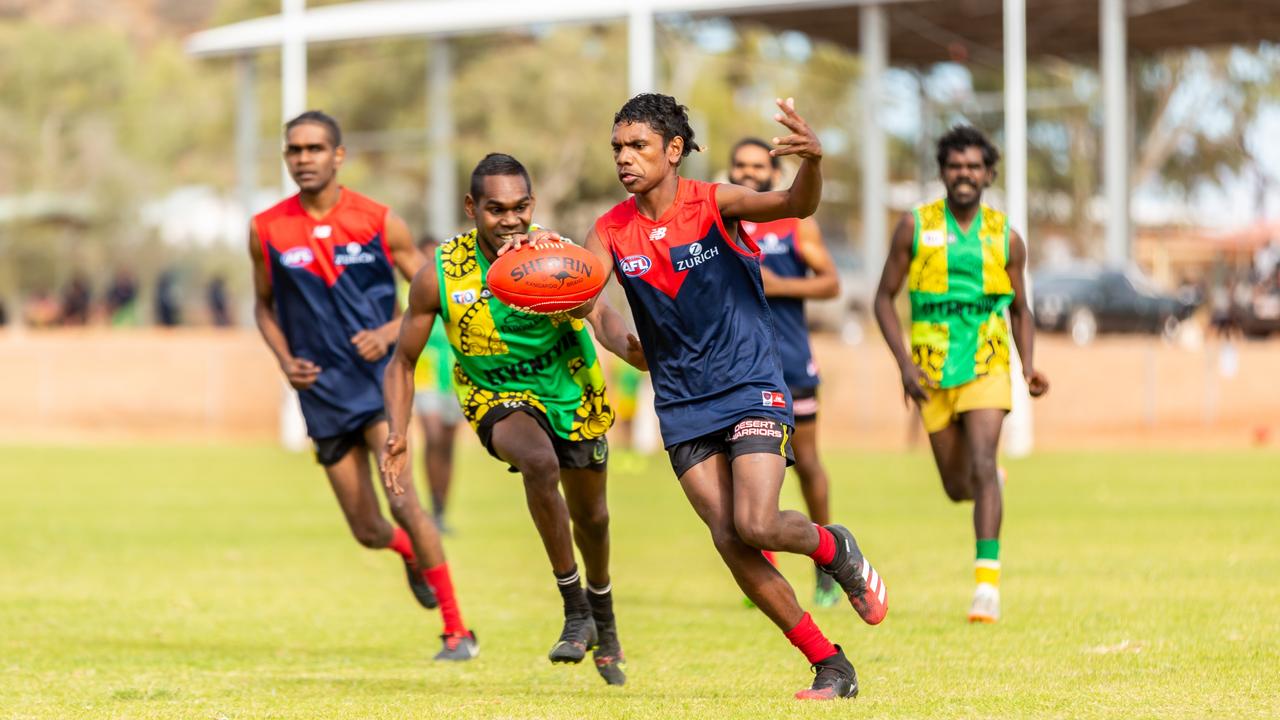 AFLNT Central Australia remote manager Clinton Firth said the region was home to plenty of talent and having grass on the oval could help fast-track development.

Gibson Turner, who was on Richmond’s list in 2012 and was one of the field umpires for relaunch match, agreed.

“Here they can adapt to the way the ball bounces so getting those conditions that’s played in Perth, Melbourne, Adelaide can only be a benefit to their football,” he said.

Planting grass on the oval had been a goal for the town for a long time but getting the Demons involved started as something of a joke.

After Melbourne staff visited Santa Teresa on a cultural immersion* trip in 2017, spending a night under the stars in swags*, hearing stories around a campfire from community leaders and eating traditional foods, they asked locals how they could assist.

The chief executive of the local Aboriginal corporation, Susie Low, told Melbourne’s IT manager, Jimmie Martin, the club could help get the ground resurfaced.

But within a month, the Demons conducted a feasibility study* that would later determine that re-grassing was possible, and the club went on to source support for the project.

MCG turf manager Michael Salvatore visited Santa Teresa in 2019 to provide advice on growing and maintaining the drought-tolerant grass. He has remained a mentor.

The MCC came on board that year, donating the goalposts, padding and one of the MCG’s mowers. The grass will also be significant for the community’s health. Dust has been a hindrance* to asthma sufferers, while rocks and the uneven surface have caused injuries.

Demons chief executive Gary Pert recalled picking up stones close to the size of his fist during his previous visit to the oval, but they did not discourage local children from running on there.

“There’s a whole change of culture when you’ve got that central green space that’s healthy to play on,” Pert said. “It really changes the self-esteem of the community.”

CLASSROOM ACTIVITIES
1. Design a Banner
Design a special banner for players to run through at the next footy game that will be played by the Ltyentyies at the new oval. Your banner should show the most important parts of the story of the oval and, of course, motivate the players to do their best.

2. Extension
Why do you think that having “a central green space that’s healthy to play on” is so important for our communities?

Write a list of as many benefits for kids, families, schools and communities that you can think of.

VCOP ACTIVITY
Description of the Senses
Imagine you are one of the children running on the grass for the first time. Decide if you are bare foot or have shoes on.

Now using your five senses (sight, sound, touch taste and smell) describe what the experience is like.

Imagine you have gone back home and you are explaining it to your family, who are yet to see the oval.

Remember when you are referring to touch, it’s not just your fingertips, it’s any part of your skin that feels a sensation.

Use strong emotive and descriptive language to create a clear image for your family.

When you have finished, go through and highlight all your VCOP to see which elements were dominant in this piece of writing.