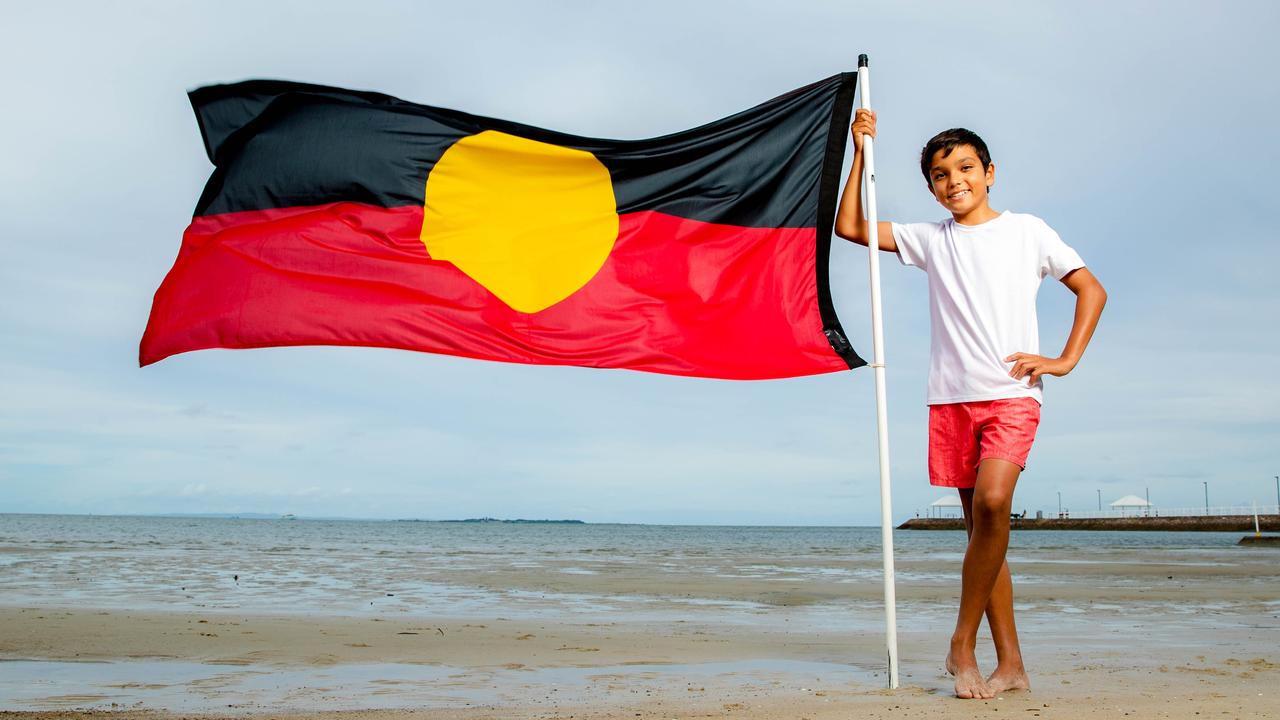 The Aboriginal flag has been made free for public use after the federal government settled a complicated longstanding copyright* stoush*.

Indigenous Australians Minister Ken Wyatt said securing free use of the flag – an “enduring* symbol close to the heart of Aboriginal people” – was “profoundly* important”.

It is understood buying the flag’s copyright – including an undisclosed payout to the flag’s creator and to commercial licensees* – cost the government $20 million. 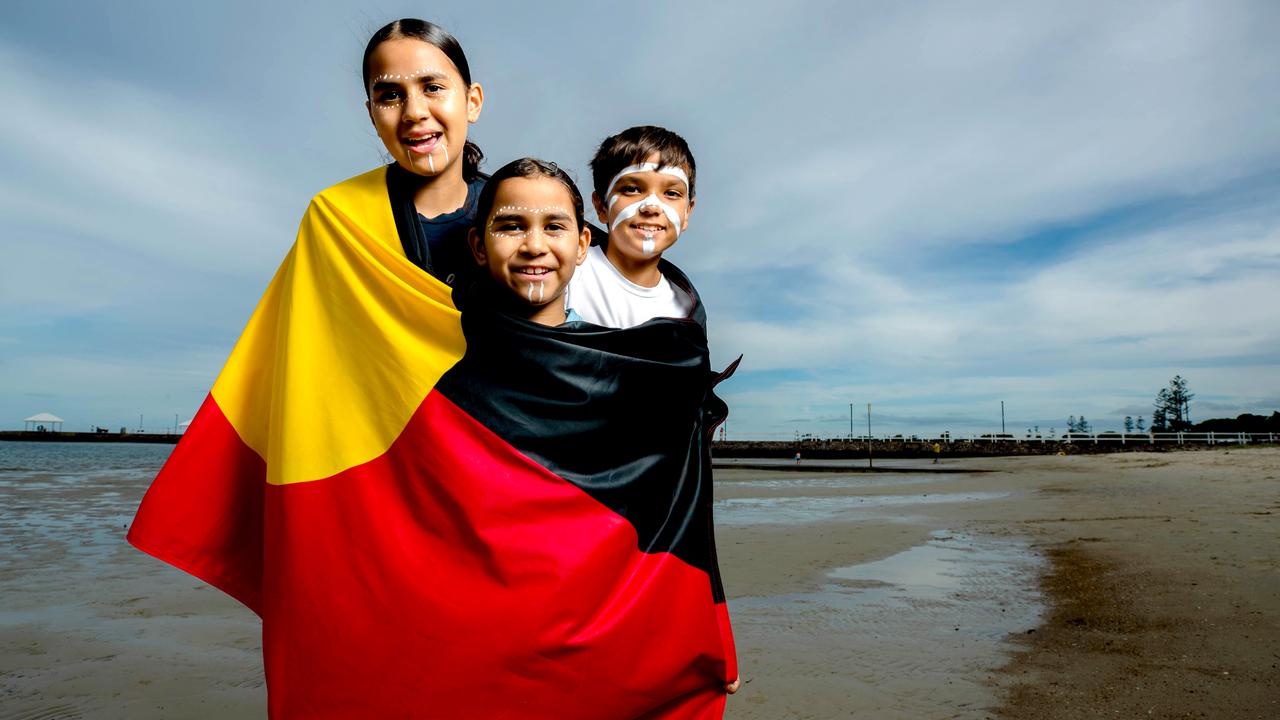 Melanie La Frentz, Alyssa La Frentz and Jamarley Edey, from the Brisbane suburb of Wynnum, wrap themselves in the Aboriginal flag after the government announced the new copyright deal making the flag free for public use. Picture: Richard Walker

Declaring the government had “freed the Aboriginal flag”, Prime Minister Scott Morrison said it would now be managed just like the national flag, in that it is free to use but must be “presented in a respectful and dignified* way”.

“All Australians can now put the Aboriginal flag on apparel* such as sports jerseys and shirts, it can be painted on sports grounds, included on websites, in paintings and other artworks, used digitally and in any other medium without having to ask for permission or pay a fee,” Mr Morrison said.

Indigenous artist Harold Thomas, as the legally recognised creator of the Aboriginal flag since the late 1990s, had granted exclusive* rights to use the flag to a number of companies, including non-Indigenous owned WAM Clothing in 2018.

This meant that those who wanted to use the flag, including Indigenous community groups, the AFL and the NRL, had to ask permission and pay a fee or risk being slapped with legal action.

The copyright agreement between the government and Mr Thomas came almost three years after negotiations began. The creator of the Aboriginal flag, Harold Thomas, signs over the copyright of the flag to the federal government. Picture: David Hancock

Under the agreement Mr Thomas will retain moral rights over the flag. This means he must be identified and named as the flag’s creator when the flag is used. It also protects the flag from being used in a way that is disrespectful to Mr Thomas.

The flag will continue to be exclusively manufactured on a commercial scale by Australian owned Flagworld.

Any future royalties* the government makes from sales of the flag by the company will go towards NAIDOC – the committee in charge of the annual event celebrating the history, culture and achievements of Aboriginal and Torres Strait Islander peoples.

The government will also provide a $100,000 annual scholarship in Mr Thomas’ honour for Indigenous students to further develop Indigenous governance and leadership.

The government has also “gratefully accepted” an original painting by Mr Thomas recognising the 50th anniversary of the flag, with the art to be displayed in a “prominent location”.

Mr Thomas has indicated that he intends to put $2 million towards establishing a not-for-profit Australian Aboriginal flag Legacy, an organisation that would support activities involving Indigenous Australians and the flag. 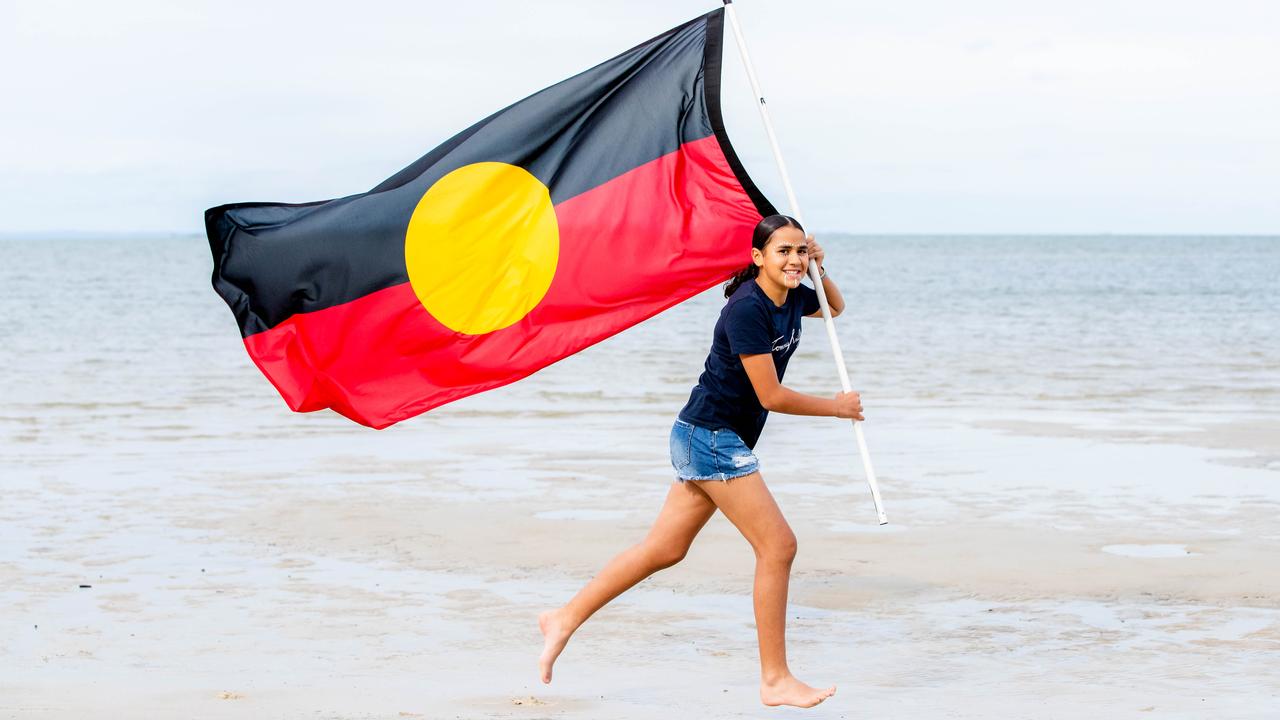 Proud Aboriginal Queenslander Larry Edey said the freeing of the Aboriginal flag meant his culture now had an emblem that was “equally as important” as the Australian flag in what he said was the “most amazing news ever”.

“There’s so many things that people can identify their heritage with, but for us that flag is significantly built around our pride and our history,” Mr Edey said.

“It’s so good to know now that we have such an emblem that is equally as important as the Australian flag.”

Mr Edey said he looked forward to seeing the flag used without restrictions, including at sporting events.

“I have friends who play for the Brisbane Lions, and when it came to the Indigenous rounds, they would say to me, ‘I just can’t believe we can’t have the flag as the centre bouncer’,” he explained.

He said his community had been forced to hide its use of the flag in the past.

“There were just so many restrictions, but now I’m looking forward to buying a shirt without being afraid to be copyrighted,” he said.

CLASSROOM ACTIVITIES
1. Aboriginal Flag Free to Use
Now that the Aboriginal flag is not copyright protected, work with a partner to come up with some places in your school and in your community where you think it should be displayed.

An example could be to display both flags on your flagpole at school if it isn’t already.

Try at think of at least five.

2. Extension
Do you think having no restrictions on the Aboriginal flag and its use will result in it being more visible around Australia and the rest of the world?

State your opinion and reasons supporting your view.