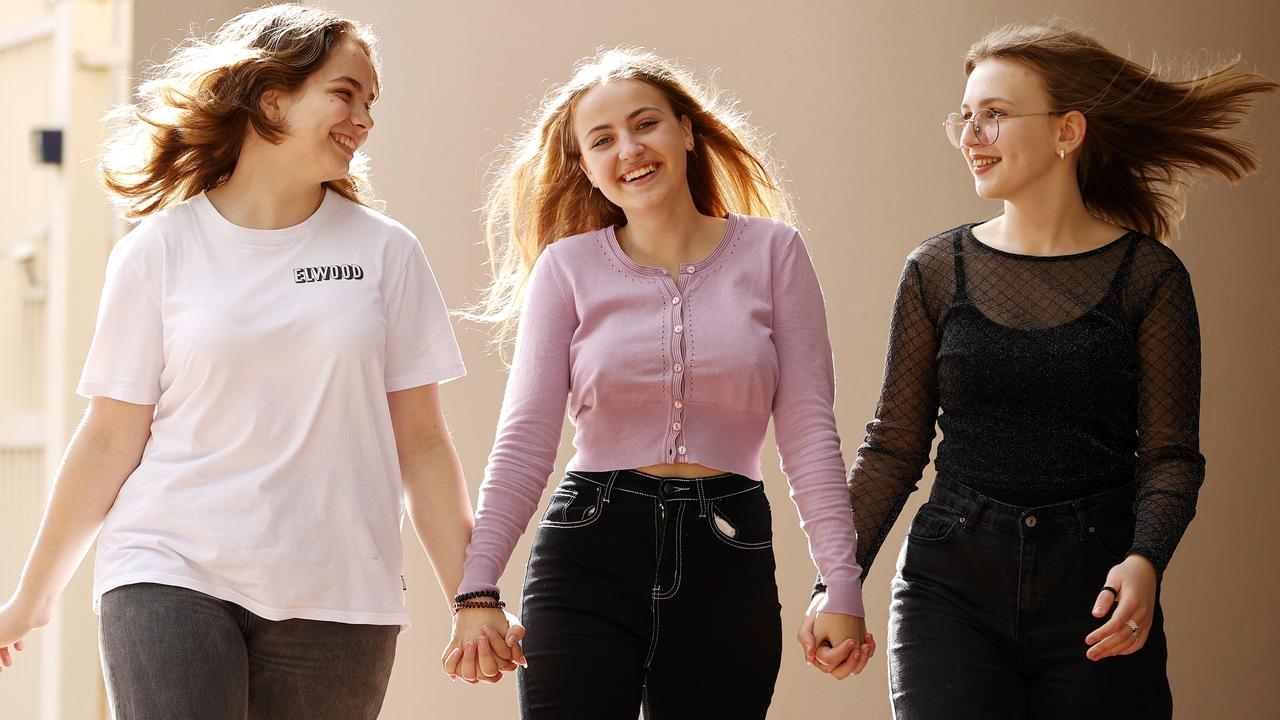 Ukrainian teens Sofia Shamanskaya, Anhelina Shevchuk, and Nika Kovalneko, all 14, are finding new friends and after arriving in Sydney as refugees fleeing war in their homeland. Picture: Tim Hunter

Teenage Ukrainian refugees* are hopeful about their future in “happy” Sydney after fleeing* their war-torn country.

But while more than 20 Ukrainian teens have found friends in Sydney – including each other – they are still deeply worried about their fathers and brothers left to defend their country from Russian forces.

Ukrainian men aged between 18 and 65 are not allowed to leave the country because they may need to be called in for military service. While reported figures have varied since Russia invaded Ukraine on February 24, the UN has recorded 4,031 civilian deaths to date. 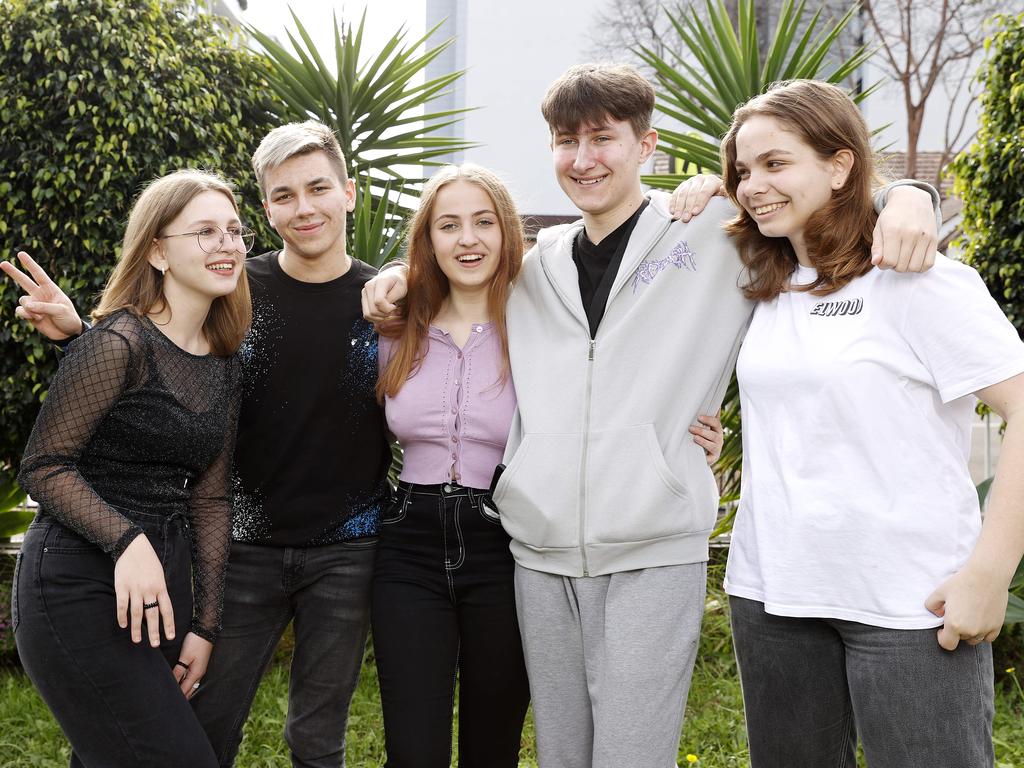 Teen refugees Nika Kovalneko, 14, Daniel Onofrechuk, 19, Anhelina Shevchuk, 14, Ruslan Hrunda, 16, and Sofia Shamanskaya 14, are among a group of more than 20 Ukrainian teenagers who are finding new friends and learning English at the Ukrainian Youth Association in Lidcombe. Picture: Tim Hunter

For 14-year-old Sofia Shamanskaya, it’s the second time she has had to leave her home to escape war.

“I was born in Donetsk in the southern corner of Ukraine,” the Abbotsleigh student said. “When the first war started in 2014, I moved to Kyiv and I lived in Kyiv for eight years.”

When Russia invaded again, Sofia and her mother escaped once more, travelling 15,000km to Sydney.

“I am very worried because I have family in Ukraine, my father and my brother and my friends,” Sofia said. “I don’t know the situation, I don’t know what will be tomorrow.

“I am not sure what will be of my country, will my country even exist? I think I will stay here – I am already an Aussie, I love this country.” 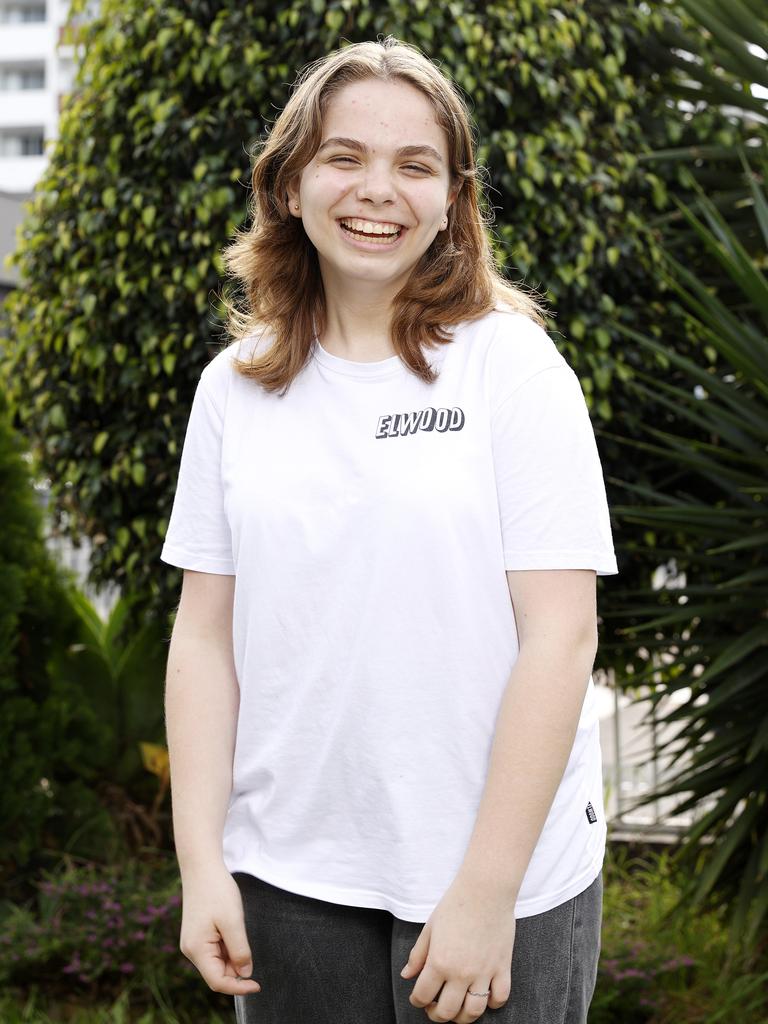 Sofia Shamanskaya, 14, escaped to safety with her mother, but her father and brother remain in Ukraine, unable to leave Ukraine because they may be called to serve in the military. Picture: Tim Hunter.

She said Australia was a “very different country” to Ukraine.

“Australians are smiling everywhere, always, and it is not strange to say ‘hi’ to someone while you are walking,” she said.

“In Ukraine if you smiled at someone you don’t know, it is very strange. Everyone in this country is so happy.”

Nika Kovalneko moved to Sydney two months ago after fleeing Ukraine to Poland and coming to Australia, where her aunt has lived for 17 years.

“It feels like another world for me, it’s very multicultural*,” she said.

Nika said she would like to return to Ukraine, but as the war continues to rage, she had no certainty about where she would end up.

“All Ukrainians don’t know what will be tomorrow, and what will be of our ­country – if something goes wrong, maybe it will be a really nice decision to stay in Australia,” she said. Be Kind Sydney is raising money to help Ukrainian refugees make a new start in Australia.

The charity’s chief executive Loredana Fyffe said the refugees were being warmly welcomed in Sydney.

“These young people are optimistic* about the future, despite the devastation they’ve seen in their young lives,” she said.

“It’s important they don’t feel isolated, and displaced* young people have the chance to continue their education.”

Those who wish to support the Ukrainian community can do so by being kind and donating to the Be Kind Sydney Appeal 2022.

CLASSROOM ACTIVITIES
1. Refugee welcome pack
If you heard of some Ukrainian teenagers coming to your school and to live in your community, what could you put in a welcome pack to ensure they felt welcomed and supported in our country? Remember that refugees often leave with nothing as they need to escape the violence quickly and safely.

Create your own welcome pack by listing the items you’d like to donate and how you would like to distribute them:

2. Extension
Would you like to raise some money to help these Ukrainian refugees in Australia? You could come up with a simple yet effective or fun idea to help raise money at school or home.

The money could be donated to the Be Kind Sydney Appeal 2022, mentioned in the article, or another charity that looks after these refugees.

Outline your fundraising proposal and if you want to take it further, book a meeting with your school principal to see if anything can be undertaken at your school.