‘We’re going on a bear hunt, we’re going to catch a big one — what a beautiful day, we’re not scared’ Australian children are joining a global bear hunt, making walks around the neighbourhood lots of fun during the COVID-19 disruption.

People all around the world have been putting teddy bears and other soft toys in windows and trees and on balconies, encouraging children to get outdoors for a walk with their parents while hunting for bears.

The hunt is inspired by the children’s book We’re Going on a Bear Hunt by Michael Rosen and Helen Oxenbury, in which the characters sing: “We’re going on a bear hunt, we’re going to catch a big one — what a beautiful day, we’re not scared.’’

The initiative* has been widely shared on community Facebook pages across Australia, mirroring similar bear hunts right across the world. In Victoria, dozens of parents from Melbourne suburbs, including Pakenham, Cheltenham, Mont Albert and Mordialloc, have been posting photos of teddies on their windows, encouraging families to keep their children active by walking around and spotting the furry toys.

The parents said the bear hunt was a welcome distraction* during a time when daily routines have changed for both children and adults.

Lauren Kennedy, from Lang Lang, Victoria, said the hunt was a “brilliant idea”. 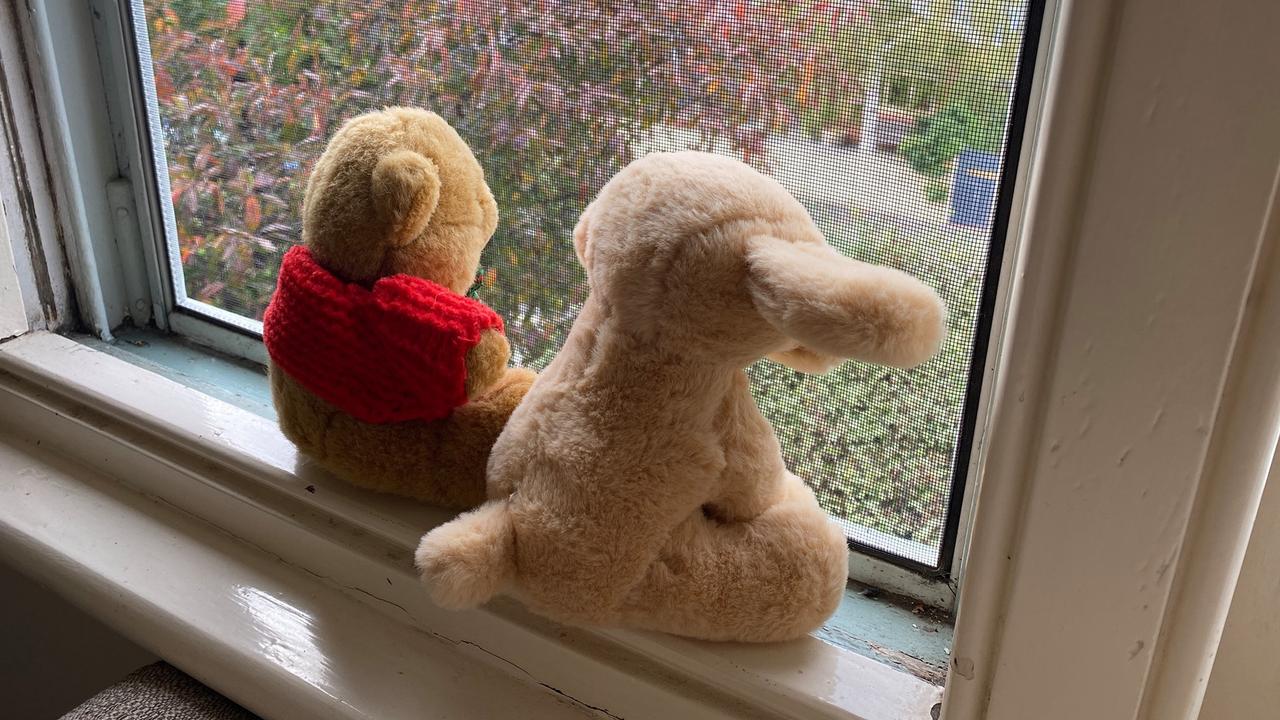 Bears and other soft toys ready to be spotted by passsers-by in Taroona, Tasmania.

“Someone posted it yesterday on our town noticeboard and so many people loved the idea and vowed to place bears in their windows today,” Ms Kennedy said.

“We will go for a walk this afternoon to see if we can hunt some down.”

She said it was important to bring the community together during these tough times.

Among the children hunting for bears is four-year-old Oliver Hrenchir from Taroona, Tasmania.

His mum Sarah Hrenchir said Oliver, a kinder student, has been home from school since last week as he’s a Type 1 diabetic, which puts him in the high-risk category for COVID-19.

“Activities like this in our community have given Oliver things to do and have put a smile on his face,’’ she said. 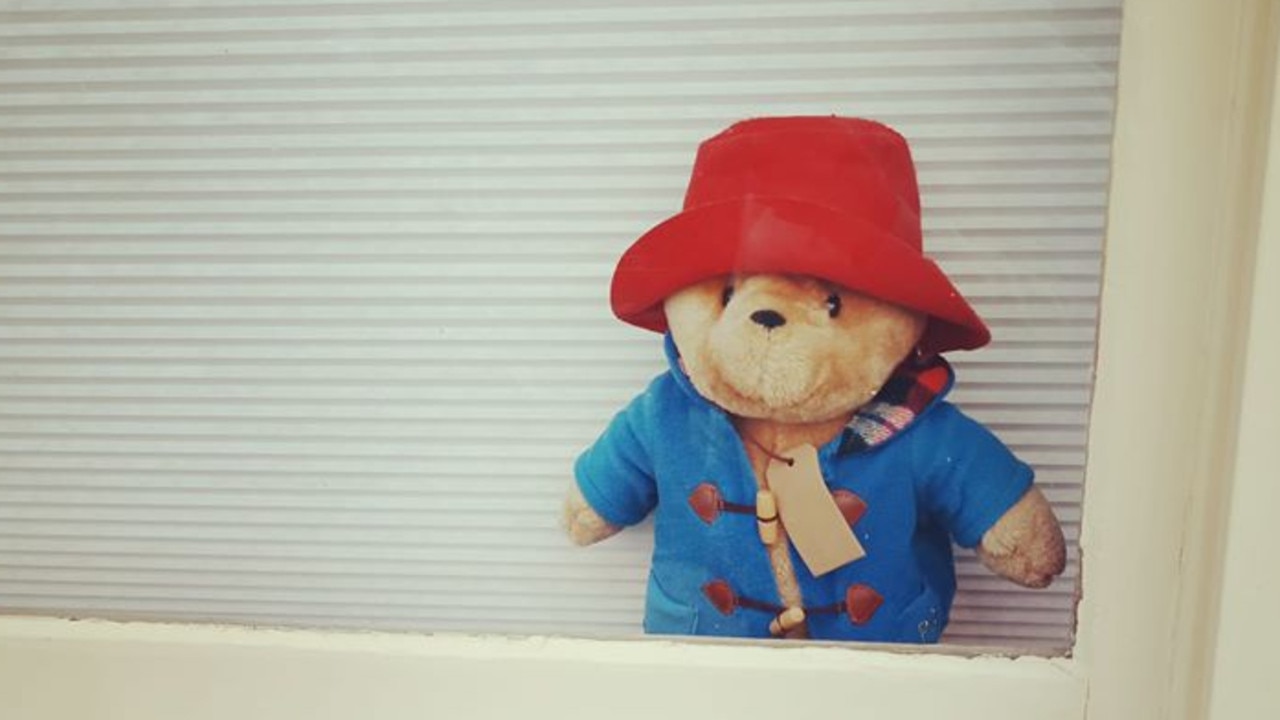 Paddington is joining in in Taroona, Tasmania.

Paulette Nicholls, mother of Teddy, 3, loves going on a bear hunt around her Mont Albert, Victoria, home and the surrounding suburbs.

“I love the simplicity of it – it says a lot about the neighbourhood,” she said. “More and more bears are popping up all the time.”

Ms Nicholls said Teddy loves waving at the bears from the car or when on walks in the pram, especially when they’re at friends’ houses.

Bears started popping up in windows in Melbourne bayside homes on Sunday.

Sharon Tapner, from Pennydale, a small pocket of Cheltenham, Victoria, said 60 residents had already signed up.

“We will take over the windows of Cheltenham, the neighbours have all jumped on it,” Ms Tapner said.

“We’ve got bears in trees, bears hiding in garden, bears in windows. One neighbour has put up disco lights in the window with teddy bears and a gremlin, it’s a little bit of fun in these uncertain times,” she said.

Peter Woolsey said he had noticed the bears at windows throughout the Arena Estate in Officer, Victoria.

“A lot of families are out walking in the evenings and are on the lookout,” Mr Woolsey said.

“I have teddy bears at my windows because I have young children and it’s so great to see neighbours getting involved at this time,” he said. 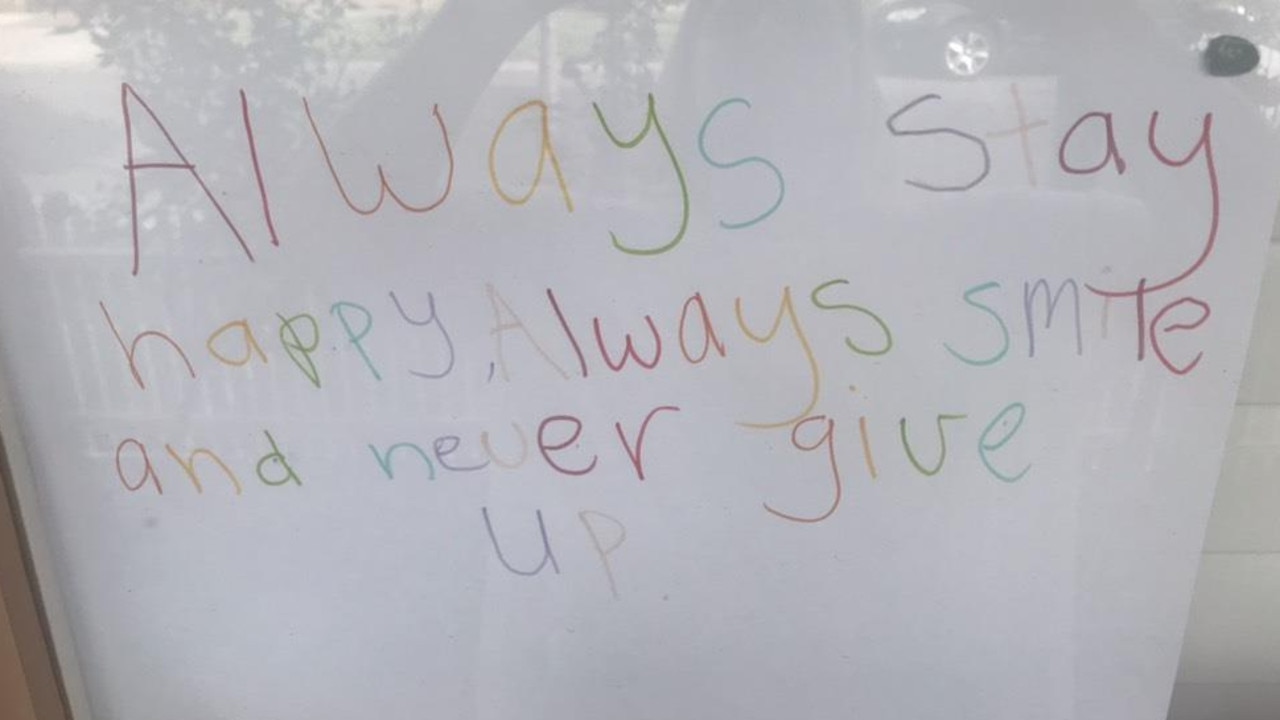 A cheery, rainbow-coloured message in a window in a Melbourne suburb this week. Picture: supplied

RAINBOWS AND MESSAGES
Other communities around the world — including in Australia — are getting creative while they wait out the COVID-19 disruption at home.

Hundreds of rainbows and messages of kindness have been displayed in windows and from balconies to cheer up passers-by. Francesco and Greta wave from their apartment window above a banner in Italian that means: “Everything will be all right” in Rome on March 13, 2020. Picture: AP

It’s not all bad news, there is good news too

CLASSROOM ACTIVITIES
1. Be a Bear
Rewrite this story from a teddy bear’s point of view.

2. Extension
Think about your favourite story. How could you use it to help to keep other kids feeling good right now?

Write a plan for what you would do and how you can do it.

HAVE YOUR SAY: What could you write on a message for your window?
No one-word answers. Use full sentences to explain your thinking. No comments will be published until approved by editors.