A fire rages in Bobin, 350km north of Sydney on November 9. Picture: AFP

Bodies battered, faces smudged with ash, eyes reddened­ by the heat — weary firefighters are being hailed* as heroes by the country towns across Australia they are protecting from widespread bushfires.

In New South Wales, Queensland, Western Australia, South Australia and Victoria over the past few weeks there have been hundreds and, in recent days, thousands of firefighters on the ground every day and night.

And their work is far from over, with conditions expected to worsen over the weekend as extreme heat in Western Australia increases the risk of bushfires in that state and then moves towards bushfire affected areas in eastern states.

More than 70 fires burned in Qld and more than 50 in NSW on Thursday.

While the frontline firefighting continues, authorities turn their attention to investigating how the fires started and learning from the current crisis to reduce the risks in the future.

NSW police believe a staggering 12 bushfires may have been deliberately lit by arsonists during Tuesday’s “catastrophic*” fire conditions.

NSW RFS Commissioner Shane Fitzsimmons was visibly upset by early reports indicating arson may have been the cause of a string of fires across the state on Tuesday.

“It’s awful, it angers every firefighter and angers everybody in the community,” he told reporters on Wednesday.

“If anyone is found to have deliberately contributed to or deliberately lit a fire yesterday the full force of the law will be brought down on them,” Ms Berejiklian said on Wednesday.

The punishment for arson in NSW can exceed 10 years in prison.

The director of the Fire Centre at the University of Tasmania, David Bowman, said new techniques could include planting “fireproof trees”, developing more golf courses, parks and other public­ open spaces for fire breaks and safety zones, more mechanical thinning and removal of undergrowth, and concentrating animals including goats to eat grass and shrubs.

More than 30 firefighters were injured in the past week as they put their bodies and lives on the line to protect communities in NSW.

Mr Wilson, who has been battling fires for weeks, was one of the 33 of 85 residents whose home was saved on Friday night.

It wasn’t the first time his home had been spared from the flames. The animal rescue shelter owner said he had been at home fighting the fire by himself two weeks ago when it was rushing towards him “six feet” high.

“I thought that was it for me, and I was alone — it was pretty tough. But then 16 fire trucks turn up.”

Another time, he was saved by helicopter.

“We were using rakes to try to brush the leaves away from the home but it was just getting closer,” he said.

“All of a sudden this helicopter flew overhead and I could see the guy hanging out of the helicopter.

“He raised his hands to say he would be back in five minutes­. Then he comes back and just dumps water on us and saves our home with all of the joeys in it.”

VIDEO: It’s important everyone understands how to keep themselves safe from bushfires

How to protect your home against bushfires Siblings Emily, 9, Michael, 8, Lachlan, 13, and Oliver Castle, 11, made this thankyou sign for firefighters working to save their Diamond Beach home. They have also been making them sandwiches and drinks. Picture: Peter Lorimer

He watched a South Australian Country Fire Service crew load a NSW Illawarra truck and get in cheering. They were bound for Johns River where a massive fire had broken­ containment* lines.

“It doesn’t matter what badge you wear on your sleeve, this is a team, this is a family, and we have people to protect,” he said. 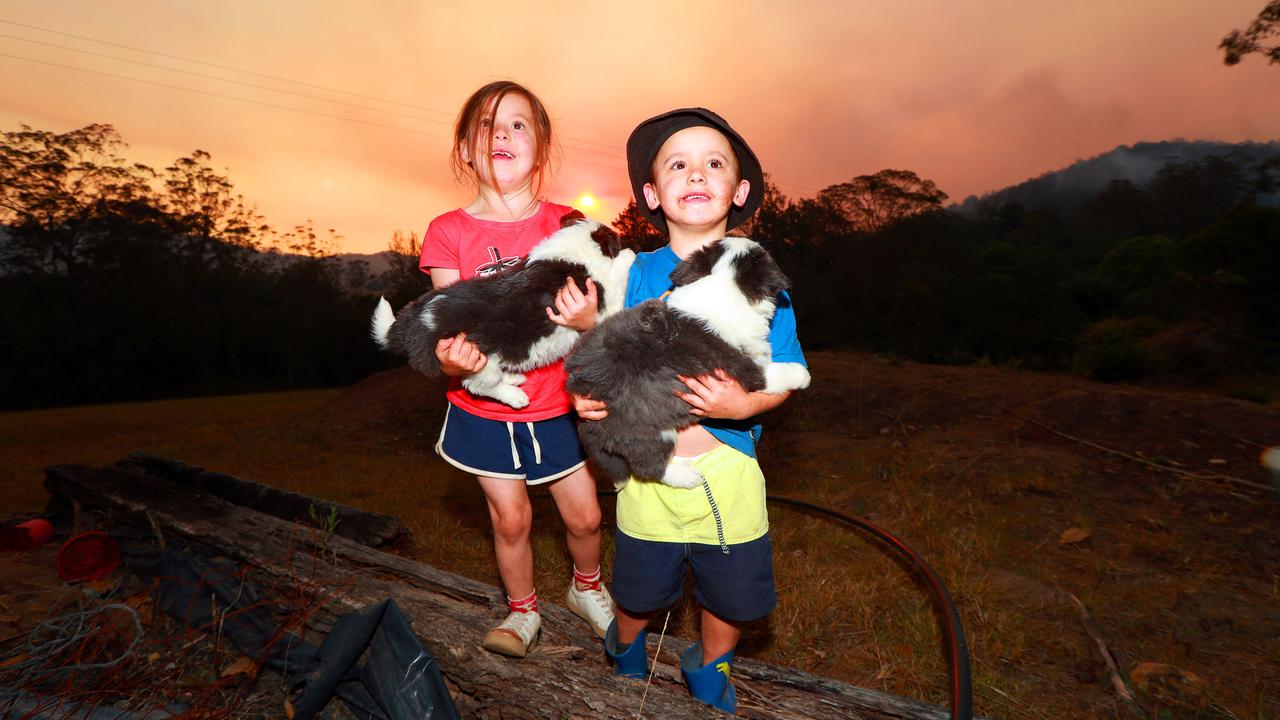 Summer, 7, and River, 5, with their puppies at Marlee, north of Taree, NSW. The family fled to safety from the fires, taking their pets with them. Picture: Gary Ramage

ONE DAY ON THE FRONTLINE
Firefighter Rod Watts is with Unit 461 from Thirroul, Wollongong, NSW.
This is his first-person account of his day on Saturday fighting fires around Taree on the central coast, around 400km from home.

“At 6am four of us from the Thirroul unit suited up with all our bushfire gear and left to join the other units in the north. We arrived in Taree to join task force Romeo and trucks from Kiama, Macquarie Fields and Menai but from the moment we jumped out of the truck we were swamped.

“The fire was moving so quickly — we’d be conducting property protection in one street, then get a call and have to race to the next. The smoke was so thick, you couldn’t see anyone in front of you — we thought a pair of homeowners were missing for a while but we just couldn’t see them through the smog.

“One property had oxygen bottles that caught alight, and the explosions left us ducking for cover. 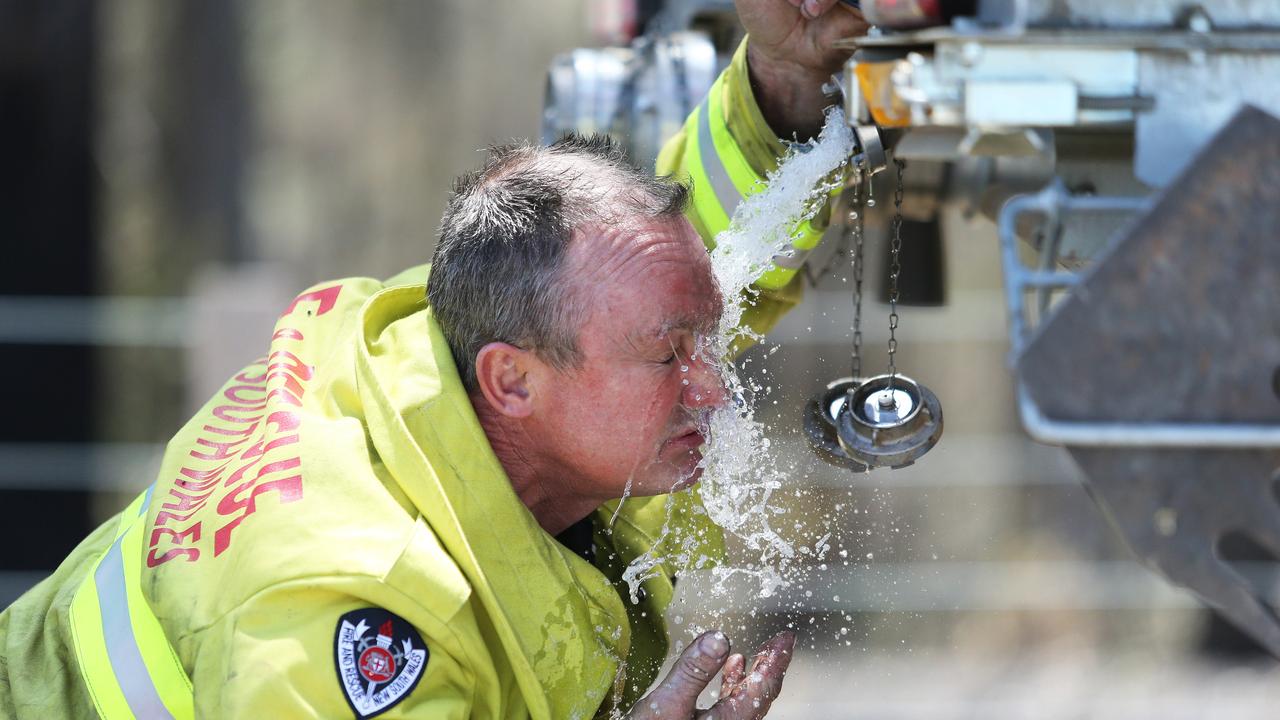 “With the flames crowning at the tops of the trees, one property was under serious threat, and as the couple didn’t want to leave, preservation of their lives became our priority.

“The wind swirled the flames everywhere, and we’d put one section out, only to have the wind swing back around and set it alight again. It was incessant*. There were three trucks fighting for their property at one stage.

“We had to fill our truck’s water at least four times. But around 8.30pm the flames finally eased off for good. In those hours, despite our efforts, three properties were lost. Packing up to head for Port Macquarie’s Charles Sturt University, we had six hours to eat, sleep in the dorms and recharge before ­another 6am wakeup call which had our crew headed for Diamond Flat on Sunday.” Modern take on The Four Seasons of Australia

CLASSROOM ACTIVITIES
1. Ode to the firefighters
Vocabulary.com states that “an ode is a kind of poem, usually praising something … An ode is a form of lyric poetry — expressing emotion — and it’s usually addressed to someone or something, or it represents the poet’s musings on that person or thing …”

Publish your ode on poster paper and decorate it for display.

2. Extension
Why do you think bushfires are so bad in Australia at the moment? List your reasons.

Work with a partner and write down some strategies you think communities or the government could do to ensure there are fewer bushfires.

HAVE YOUR SAY: Send the firefighters a message of support.
No one-word answers. Use full sentences to explain your thinking. No comments will be published until approved by editors.