Archer and his mum Anastasia Barros are all smiles now after Archer was named a Junior Triple Zero Hero for his bravery last year. Picture: David Caird

When seven-year-old Archer walked into his mum’s bedroom last year and found her unconscious*, he was terrified.

Archer, who lives with autism, reached for his mum’s phone and knowing her PIN, called his grandmother out of instinct*.

She told him to hang up and call triple-0 but he already knew what needed to be done.

Archer’s mum, Anastasia Barros, 46, has diabetes* and her blood sugar level dropped so low in the night that she began to suffer from hypoglycaemia*.

“Archer woke up in the middle of the night and tried to wake me up but couldn’t,” Ms Barros said.

“It was a pure coincidence that I spoke to him earlier that week about calling triple-0.

Archer, now aged 9, is not only his mum’s hero, but also officially a Junior Triple Zero Hero for 2021.

While the formal ceremony last month was cancelled due to Covid-19, Archer will receive a Junior Triple Zero Hero medal and certificate in the mail. 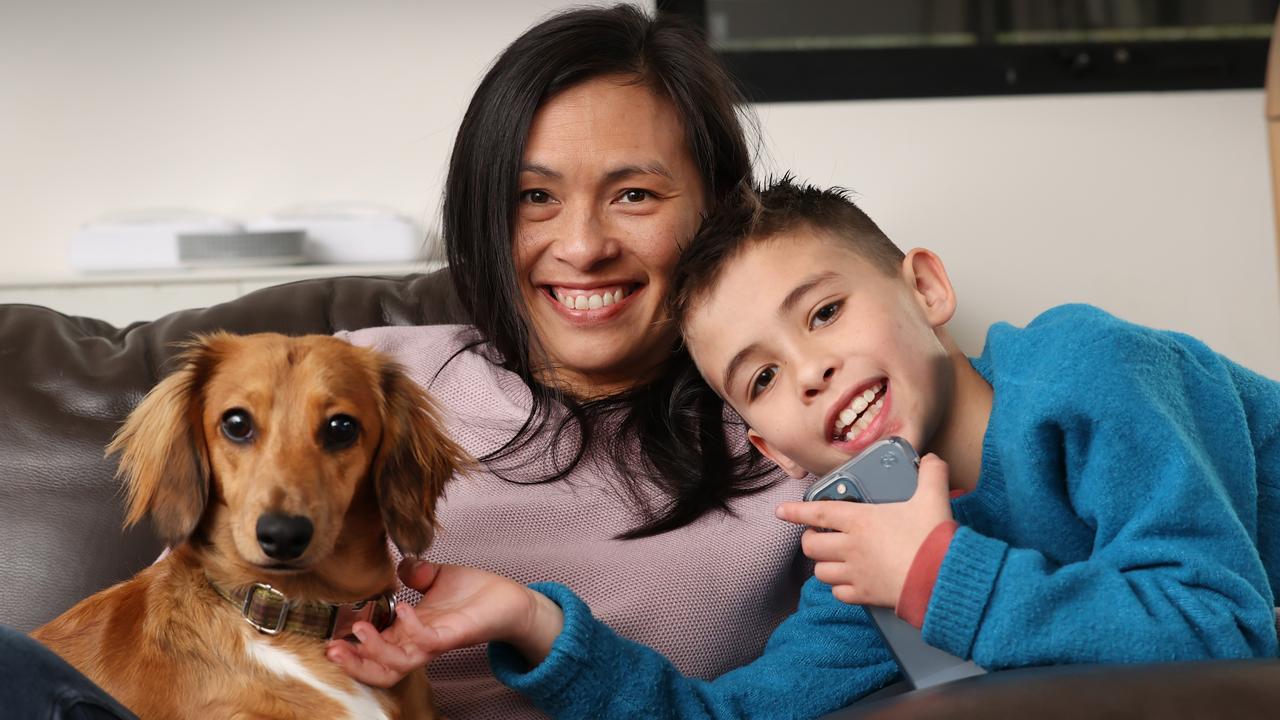 Archer, 9, with his mum, Anastasia Barros, and the family dog. Picture: David Caird

Archer, from the Melbourne suburb of Surrey Hills, said he was “really proud” to be recognised for his bravery and clear-thinking in the emergency.

Ms Barros said upon hearing the audio of Archer on the phone with the triple-0 call-taker, she could tell he was “very stressed”.

“It’s just me and mum (at home),” Archer told the call-taker.

Listening carefully to the call-taker’s instructions, Archer tilted his mum’s head back, to open up her airway.

While unable to turn his mum onto her side, he was able to conduct a breathing test on her, saying the word “now” to the call-taker every time she took a breath.

Emergency Services Telecommunications Authority chief executive Marty Smyth said the awards highlighted the importance of teaching children when and how to call triple-0.

“These young heroes have shown that by knowing how to get the right help in an emergency, a child might save the life of a loved one,” Mr Smyth said.

“It’s important (to know how to call triple-0) because other kids can help their mothers,” he said.

CLASSROOM ACTIVITIES
1. Write a Jingle
A jingle is a short catchy song that is used in advertising. Write a jingle, rhyme or a rap that will help kids to learn about and understand why it’s so important to know how and when to use triple-0 in an emergency.

2. Extension
Archer will be getting his award by mail. Imagine that it is your job to write a letter to Archer that will be included with his award. What do you think should be in this letter? Plan and write the perfect letter to Archer.

VCOP ACTIVITY
You’re A Hero in My Eyes
Sometimes heroes go unnoticed. They are everyday people, who make a big difference to those they meet.

Write a letter to someone who is a hero in your eyes. Explain to them why they are your hero and that you have noticed them. Your letter can be anonymous or you can personally sign it off.

Try and include detail and emotion in the letter to connect with your target audience, your hero.