Dylan Alcott interrupted his Australian Open campaign in Melbourne to travel to Canberra to be named the Australian of the Year. Picture: Michael Klein

Tennis champion, Paralympic gold medallist, advocate* and philanthropist* Dylan ­Alcott has been named 2022 Australian of the Year, becoming the first person with a disability to win the top award.

Alcott, 31, travelled from Melbourne to Canberra to ­accept the honour just hours after he secured a spot in the Australian Open men’s quad final, his last tournament before his ­retirement from professional tennis. 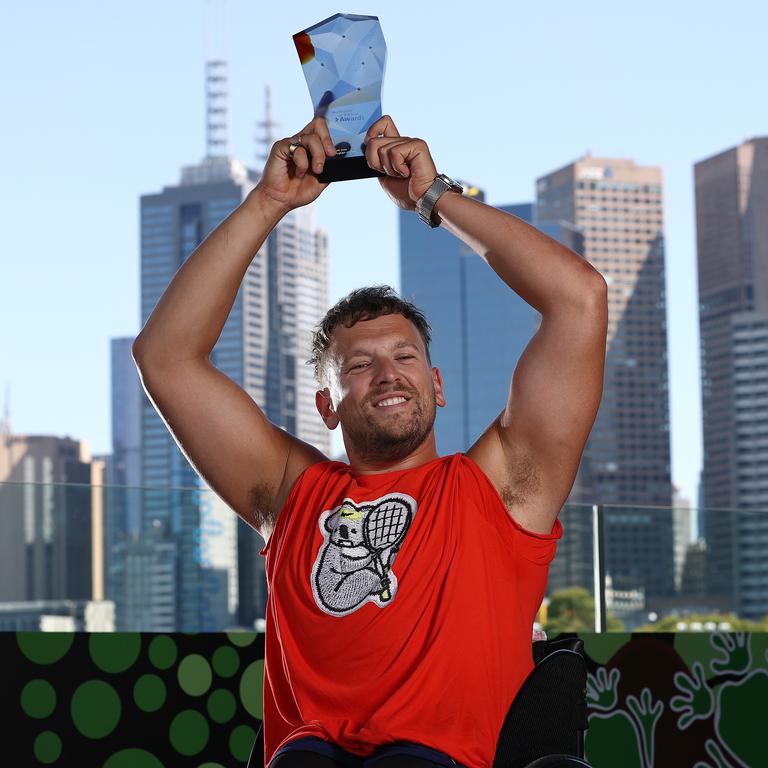 Dylan Alcott shows off his Australian of the Year trophy after returning to Melbourne to play in the Australian Open, the final tennis tournament of his professional tennis career. Picture: Michael Klein

In being named Australian of the Year, Alcott was recognised for his “leadership and commitment to ­developing opportunities for people with a disability”. He was also credited with “making an impact for thousands of Australians”.

National Australia Day Council chairwoman Danielle Roche said Alcott was a champion who had risen to the top of the world rankings “through sheer grit* and determination”.

“Dylan is an inspirational Australian on and off the tennis court,” she said.

Alcott’s sporting achievements include Australian Open champion seven years running from 2015 to 2021, although he was denied an eighth title and fairytale finish to his career this year, finishing runner-up. 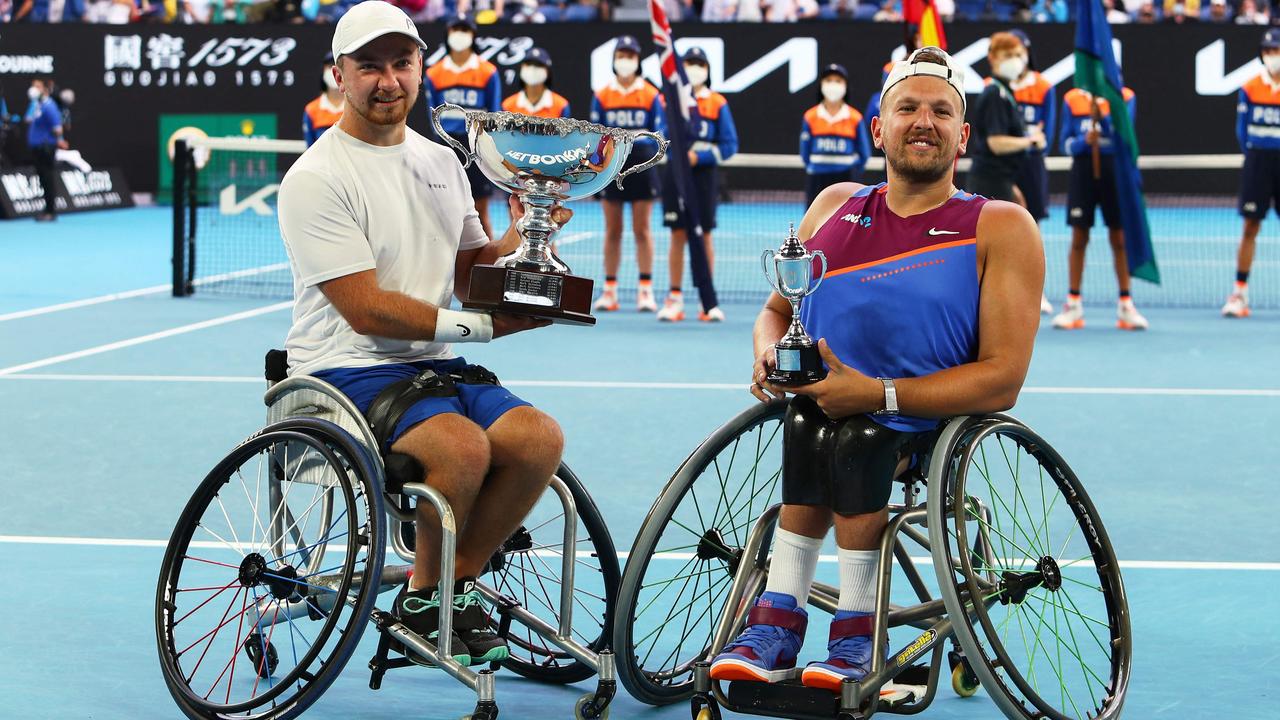 In 2021 he became the first man in history to achieve a “golden slam” of all four major singles titles as well as a Paralympic gold medal in the same calendar year. But that’s not all – he is also the brains behind AbilityFest, which is the first and only fully ­accessible* music festival.

He also started the Dylan Alcott Foundation to provide scholarships and funding to marginalised* Australians with disabilities.

Alcott, who is also a TV and radio commentator, said that as a teenager he “hated” being in a wheelchair because he didn’t see anyone like him in the media.

He noted his most “profound*” impact had come from beyond the field of play. Dylan Alcott makes a speech after accepting his Australian of the Year award. Picture: Getty Images

Alcott was named Australian of the Year at a ceremony held on the eve of Australia Day.

Also honoured was the 2022 Young Australian of the Year, Dr Daniel Nour.

Dr Nour, 26, is the founder* of Street Side Medics, a not-for-profit mobile medical service with 145 volunteers and four clinics across NSW. The service treats more than 300 homeless people who have illnesses ­including diabetes, hepatitis C, HIV and cancer.

He was recognised for “making a real difference to the lives of many Australians”. 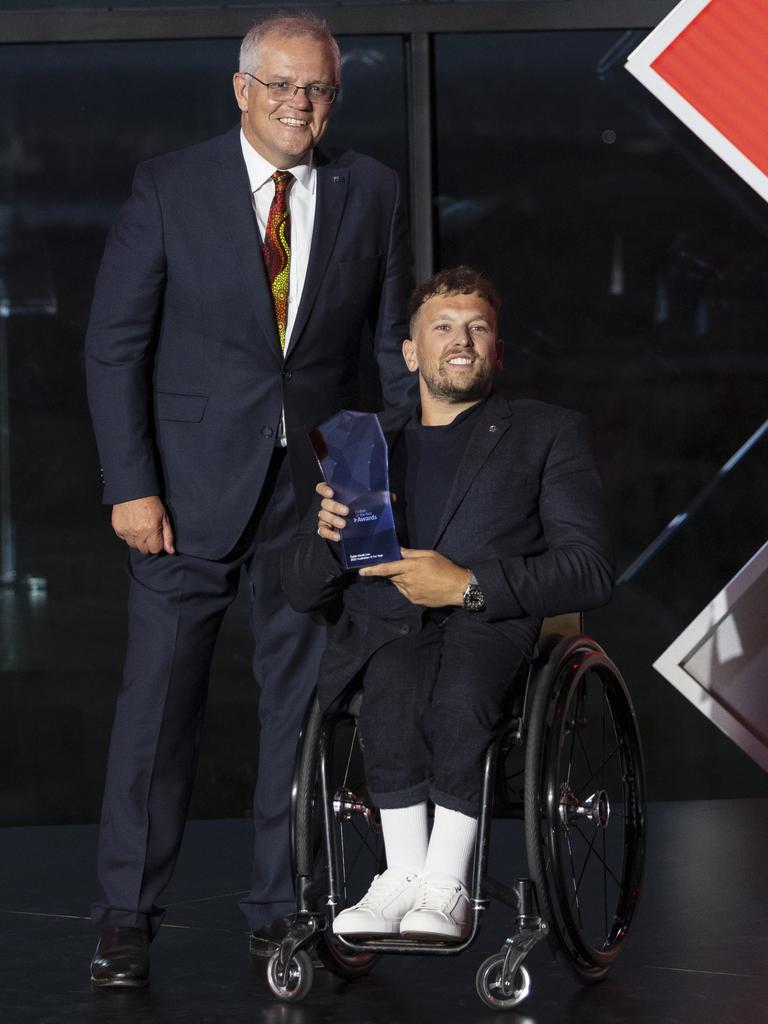 Prime Minister Scott Morrison paid tribute to Dylan Alcott and his many achievements at the 2022 Australian of the Year Awards in Canberra. Picture: Getty Images

Prime Minister Scott Morrison described the 2022 finalists as “incredibly different” but sharing “a great civic mindedness*, a desire to make a difference and a great love of our country”.

“Every year, I’m incredibly amazed at the breadth* of Australians who are the finalists,” he said.

Mr Morrison said ­Alcott was a “household name” at the top of his game, but still “determined to help so many others succeed”.

2. Extension
Choose three attributes that you included in your word cloud that you think you also possess. Write a sentence for each giving an example of how you demonstrate this attribute.