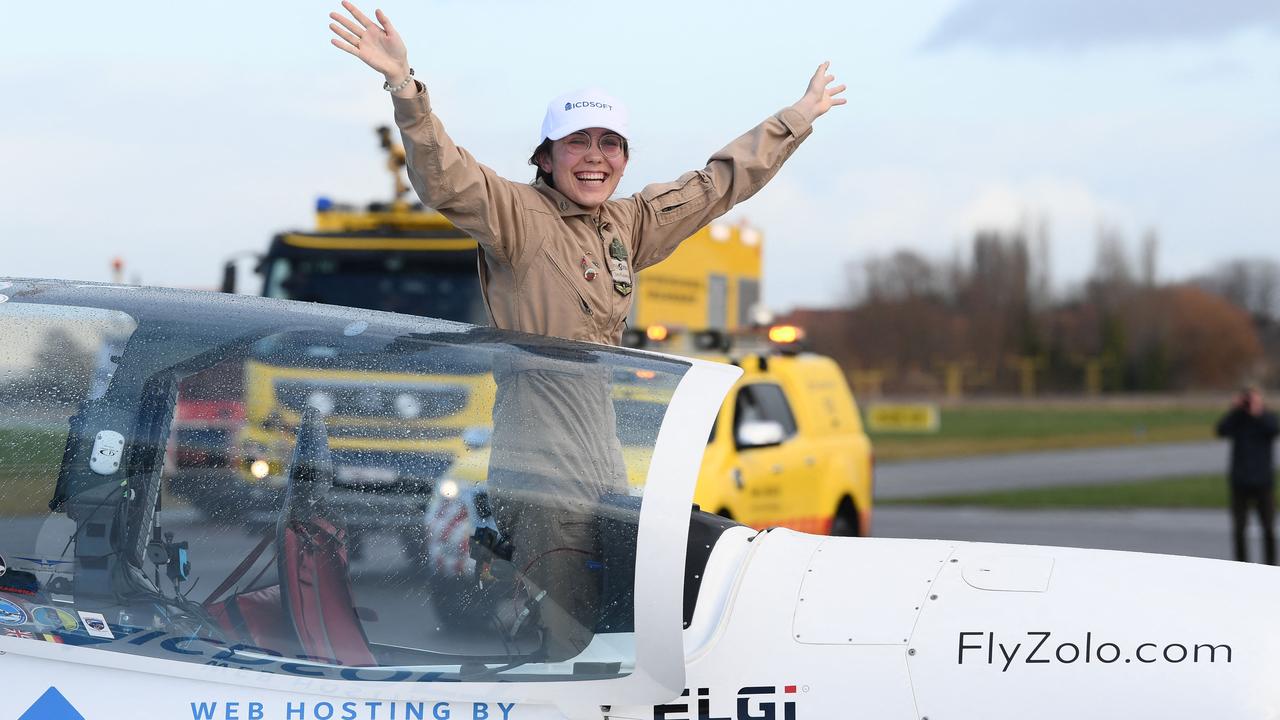 Beaming and waving her arms in the air, teenage pilot Zara Rutherford was euphoric* after completing a solo around-the-world flying odyssey* with the dream of getting into the record books.

“It was very difficult but very rewarding,” confessed the 19-year-old Belgian-British sensation who became the youngest woman to circumnavigate* the globe alone in a cockpit.

She touched down at an airfield outside the Belgian town of Kortrijk, welcomed by a crowd of journalists, wellwishers and family on January 20, just over five months after she set off on August 18, 2021. “It’s very strange being back here,” she told a media conference, adding that, after an epic* journey with stops in almost 30 countries, she was looking forward to putting her feet up for a while in just one place.

“I’d like to do nothing next week,” she laughed. “It was harder than I imagined.”

Ms Rutherford, whose parents are pilots, said Russia’s vast, frozen expanse of Siberia was the “scariest” leg of her journey: a place of overwhelming distance between towns, and where the temperature fell below minus 30C.

“I’d be going hundreds and hundreds of kilometres without seeing anything human – I mean no electricity cables, no roads, no people – and I thought ‘if the engine stopped now I’d have a really big problem’,” she said.

Watch her voyage: youngest woman to fly solo around the world

Navigating the world in a tiny, 325kg Shark UL single-propeller plane, loaned to her under a sponsorship deal, meant she had to skirt around clouds and could not fly at night.

The restrictions meant many times she had to divert or make hasty* landings, including to avoid getting caught in the first thunderstorm Dubai had seen in two years.

There was also a long three-week stretch in November in a Russian eastern coastal town called Ayan where she could not take off because of the weather, relying on kind locals who were “very willing to help with anything I might need”.

She did not escape the Covid pandemic and related restrictions, either. China barred her from its airspace because of virus rules. She said that resulted in having to do a “huge detour to avoid North Korea, and that took six hours over water”.

“That was a pretty nerve-racking experience,” she said.

She was subjected to PCR tests* “all the time” to get clearance to land. Zara Rutherford touches down in her Belgian home town of Kortrijk on January 20, 2022. Picture: AFP

But the 52,000km trip, tracked on her website and caught on cameras she took with her, also brought its share of unique experiences.

They included flying around the Statue of Liberty in New York, seeing a SpaceX launch in California, soaring above Saudi Arabia’s “diverse” landscape, stopping in Colombia, seeing an isolated house on its Icelandic island, and powering along “beautiful” Bulgarian valleys.

“I’ve been through some stuff, so many countries, so many kilometres, but every single one was amazing,” Ms Rutherford said.

“I’m just happy to finally be in the same spot for, you know, a few months hopefully.” Zara’s flight earned her the world record for the youngest woman to fly solo around the world. Picture: AFP

Ms Rutherford is not the youngest person to have flown around the world solo. That title goes to an 18-year-old Briton, Travis Ludlow, who completed his feat in July last year.

But, once confirmed by Guinness World Records, she will hold the title of the youngest woman to do so, displacing* a US pilot of Afghan origin, Shaesta Waiz, who circumnavigated the planet in 2017, aged 29. The Belgian-British teenage pilot hopes her achievement will encourage other females to take an interest in aviation. Picture: AFP

More than that, though, she said her feat was a tribute to seizing hold of dreams and making them happen.

“I want to encourage people to do something crazy with their lives, to go for it,” she said.

CLASSROOM ACTIVITIES
1. Challenges and Growth Opportunities
As outlined in the article, Zara Rutherford faced many challenges during her solo around the world aviation trip. She also got to have some amazing experiences.

Outline in your table all the challenges she came across, mentioned in the article and those you can think of yourself, and the opportunities for growth she may have had on her five-month trip.

2. Extension
Zara wants to encourage people and girls to follow their dreams and do some crazy things. This was her dream and she planned for it and made it happen.

VCOP ACTIVITY
My Most Memorable Moment
Wow what an achievement. Imagine flying alone for five months in a tiny plane.

Read through the article carefully and pick a moment that Zara mentions and expand upon it, pretending you are Zara.

This is a narrative, so you can decide how the moment plays out, as long as it matches what Zara mentions in the article.

Try to capture the audience’s attention by using three different power openers throughout your story. Remember power openers are sentences that start with an adverb (“ly” word), a verb (“ing” word) or connective.