Tamil asylum seeker family at home in Biloela at last Tharnicaa Nadesalingam celebrates her fifth birthday with her parents, Priya and Nades, and her sister, Kopika, on June 12 after their return home to Biloela four years after they were removed and placed in immigration detention. Picture: Getty Images

Four years after they were removed from Biloela in an early morning Border Force* raid, the Nadesalingam family spent their first night back in the central Queensland town they call home.

Sri Lankan asylum seekers* Priya Nadaraja and Nades Murugappan and their two Australian-born daughters, Kopika, 7, and Tharnicaa, 5, were greeted by dozens of emotional supporters at an airport near Biloela on Friday, June 10.

Priya and Nades arrived in Australia separately by boat in 2012 and 2013 to seek asylum*. Both had fled Sri Lanka, saying that as Tamils* they feared persecution* in the aftermath* of Sri Lanka’s civil war. The couple met and married in 2014.

They were granted bridging visas* while the government decided if they met the strict conditions that would allow them to stay permanently in Australia.

They moved to Biloela, where Nades worked at the meatworks, Priya did volunteer work and the family was embraced by the local community. Kopika was born in May 2015, followed by Tharnicaa in June 2017. 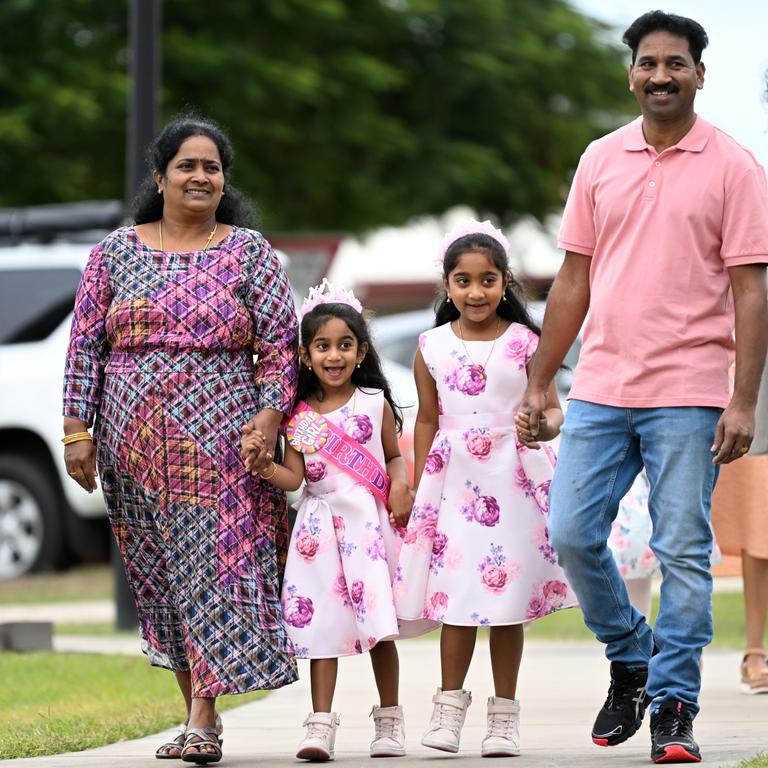 Priya, Tharnicaa, Kopika and Nades arrive at a birthday party being thrown by friends in Biloela after arriving back home in the central Queensland town. Picture: Getty Images

The family lived in Biloela for about three years but were removed and placed in detention after their visas expired in March 2018 and the previous Morrison government decided they did not meet the criteria* to stay in Australia as refugees*.

The family, who are known as the Murugappans but go by Nades’ full first name, Nadesalingam, in line with cultural practice, have been fighting deportation* since.

They have spent the past four years in immigration detention in Melbourne, Christmas Island and most recently in community detention* in Perth.

Labor leader Anthony Albanese promised during the 2022 federal election campaign to return the family to Biloela if Labor won government. 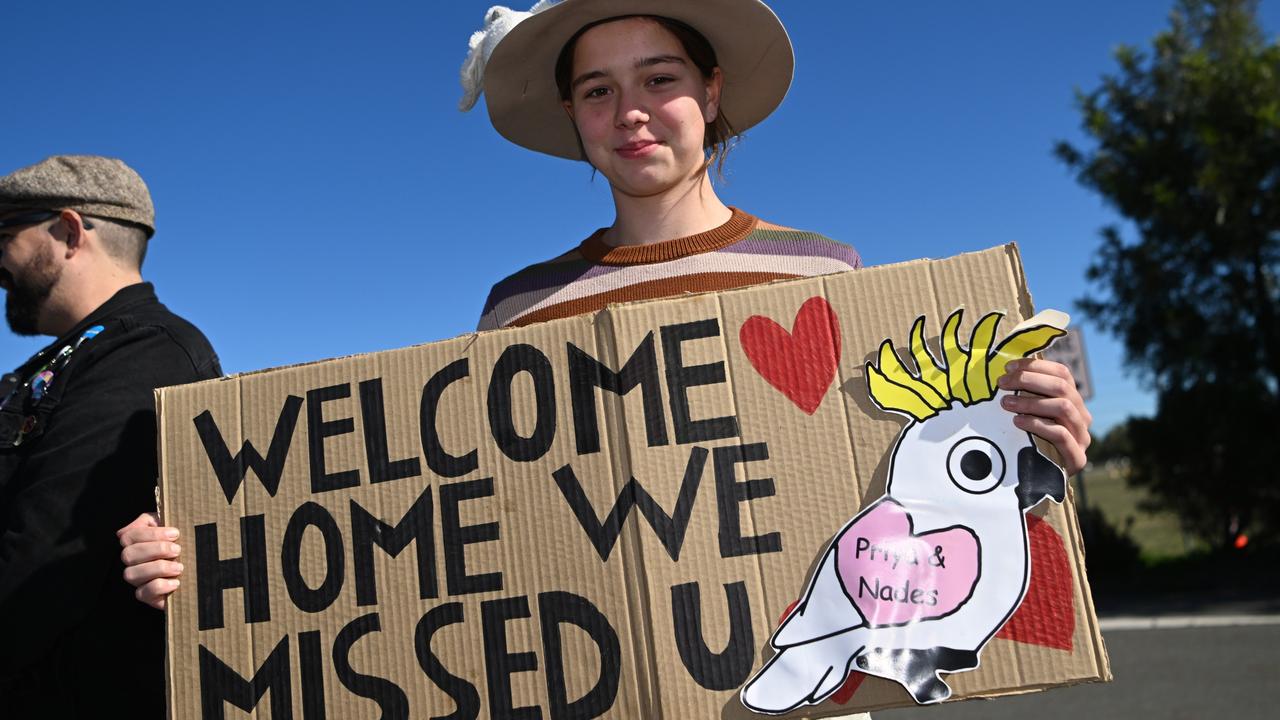 As they took their first steps out of the airport terminal on Friday, Priya dropped to her knees in tears and kissed the ground.

She, her husband and daughters were swarmed by friends, desperate to embrace after four years of separation.

“It has been hard, my journey back to my community, Bilo,” Priya said. “I am starting a new life, joined with my family, so happy, thank you.”

Tharnicaa, who was nine months old when the family was detained, celebrated her first birthday outside ­detention on Sunday with a “pink party”.

Speaking further through an interpreter, Priya said she felt like she was “flying” when she walked off the plane.

“I can’t describe the ­moment of landing in Bilo,” she said. “Landing here gives me a lot of hope and for my daughters. I hope I can give my girls a better life.” Priya drops to her knees in tears after being greeted by supporters at the airport near Biloela. Picture: Jack Tran

Treasurer Jim Chalmers used his ministerial powers to intervene* in the Tamil family’s case, granting bridging visas to allow them to return to Biloela while their immigration status is settled.

“We are going to keep fighting until Priya, Nades and these two beautiful girls have permanent safety here in Biloela,” she said.

The Nadesalingam family are still on temporary bridging visas, but Prime Minister Albanese has said there would be “no impediment*” to the family gaining permanent visas.

“It was heartening to see the family returned home to Biloela,” Mr Albanese said. “They received a welcome from a town that wanted them home.”

CLASSROOM ACTIVITIES
1. Children in detention
Keeping children in immigration detention is a contentious topic that divides a lot of people. This family has been in the news a lot mainly because the two children were actually born here in Australia and have been detained for the last four years.

Detention centres aren’t meant to be the nicest place for most people, but especially not children. The youngest child, Tharnicaa, has spent every birthday until now behind fences and not free. How do you think being detained in these types of places might affect children?

Fill out the table below:

Growing up in Immigration Detention Centres – How might it affect children?

2. Extension
Priya stated in the article that “Landing here gives me a lot of hope and for my daughters. I hope I can give my girls a better life.” What do you think this better life might involve for this family?

VCOP ACTIVITY
Imaginative dialogue
Imagine you were there when the Nadesalingam family arrived back in Biloela.