A child in the Syrian refugee camp 5km from Diyarbakir. Picture: AFP

Young Australians are greatly concerned about the difficult conditions refugees* are facing around the world and want to do more to help.

A new World Vision survey of more than 1000 young people aged 11 to 19 was taken as a “pulse check” on the humanitarian* views of young people and found 91 per cent want to do more to assist refugees.

Only one in 10 (9.4 per cent) agree that Australia is doing enough through overseas aid while nearly two thirds (61.4 per cent) of young people feel we should be doing more to welcome our fair share of refugees to resettle here.

The report, Australian Youth on the Global Refugee Crisis, offers an insight into what our youth think about the world’s biggest humanitarian emergency — 68.5 million people have been forced to flee their homes around the world, the largest number in history. A young boy stands amid tents in Atma, an encampment for refugees near the border with Turkey.

The report reveals the impact the crisis* is having on a generation growing up with constant news items about families fleeing, being separated from loved ones and having to live in refugee camps for a very long time.

The survey findings come as World Vision launches its youth fundraising event, the 40 Hour Famine Backpack Challenge.
More than 50,000 young Australians will live out of a backpack for 40 hours to raise funds while trying to imagine stepping into the shoes of a refugee. World Vision’s 40 Hour Famine raises funds to assist refugees and increase young people’s understanding of what they go through.

“The survey clearly shows that we have underestimated the impact the refugee crisis has had on our youth,” Ms Roger said. “Images of families fleeing from war, conflict and famine* have now become the daily norm* for our children.”

Ms Rogers said it was pleasing to see Australian youth still fighting for causes they believe in.

“Australian youth were mobilising* change for drought-affected* global communities in the 1980s,” she said.

“Young Australians have always been the moral compass* of this nation. I have no doubt this will be the generation to lead our government to a path of increased compassion and inclusiveness*.”

The survey revealed the top three issues young people feel refugees face when they settle in Australia are discrimination* (57.1 per cent), mental health (55.6 per cent) and language (56.1 per cent). 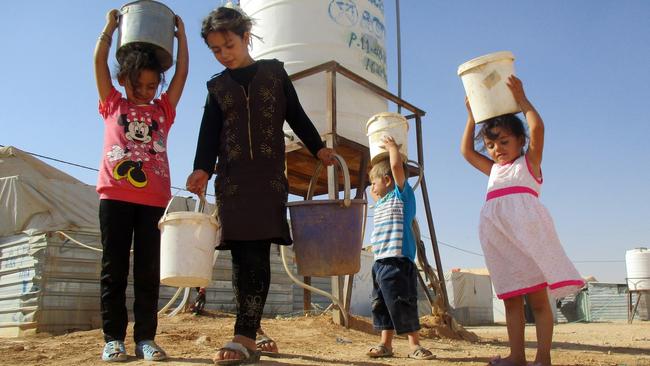 Half of young Australians have wondered about the possibility of becoming a refugee and one in five believe it is a definite possibility and it could happen to anyone.

When asked what they would pack if they faced having to flee their own homes, they said the most important items were food and water (64.3 per cent), identification documents (56.6 per cent) and money (51.6 per cent) ahead of their mobile phone (23.6 per cent).

This year’s 40 Hour Famine Backpack Challenge will help World Vision support the needs of refugees and displaced people around the world, including through; emergency relief; provision of supplementary food; nutrition and hygiene support and child health care; and education opportunities for children and families.

Complete the ‘Think Box’ below reflecting on your knowledge and feelings of the refugee crisis in Australia and around the world. 2. Extension: Would you like to complete the 40 hour backpack challenge that World Vision are co-ordinating to help the young refugees overseas? Ask your teacher if you can visit the website 40hourfamine.com.au and speak to your family if it’s something you may be interested in participating in.

HAVE YOUR SAY: How do you think your family would feel and cope if you were forced from your home and country during a war and made to live in a refugee camp?
No one-word answers. Use full sentences to explain your thinking.