A 12-year-old Adelaide boy is preparing to embark on an epic* waterskiing journey on the Murray River to wash away myths* about his little brother’s Down syndrome.

Koa, 5, is the adored youngest member of the Fahey household. Like most little brothers he is active, cheeky and loving as well as a “little annoying” at times to big brother Reef, 12, and sister, Mahala, 10.

Reef and Mahala are fiercely proud of their brother, who started school this year. But it is the normalcy* of life at their home in Adelaide’s southern suburbs that the siblings* are determined to share.

Reef has set himself a challenge to water ski a total of 213km before World Down syndrome Day, on March 21 next year as a way of raising awareness about Down syndrome, also known as Trisomy 21 or T21.

“When I was seven, my little brother was born with Down syndrome (but) I don’t even notice it,” Reef said.

“I ride my motorbike with Koa, we ski and do a heap of other stuff … he plays footy.” 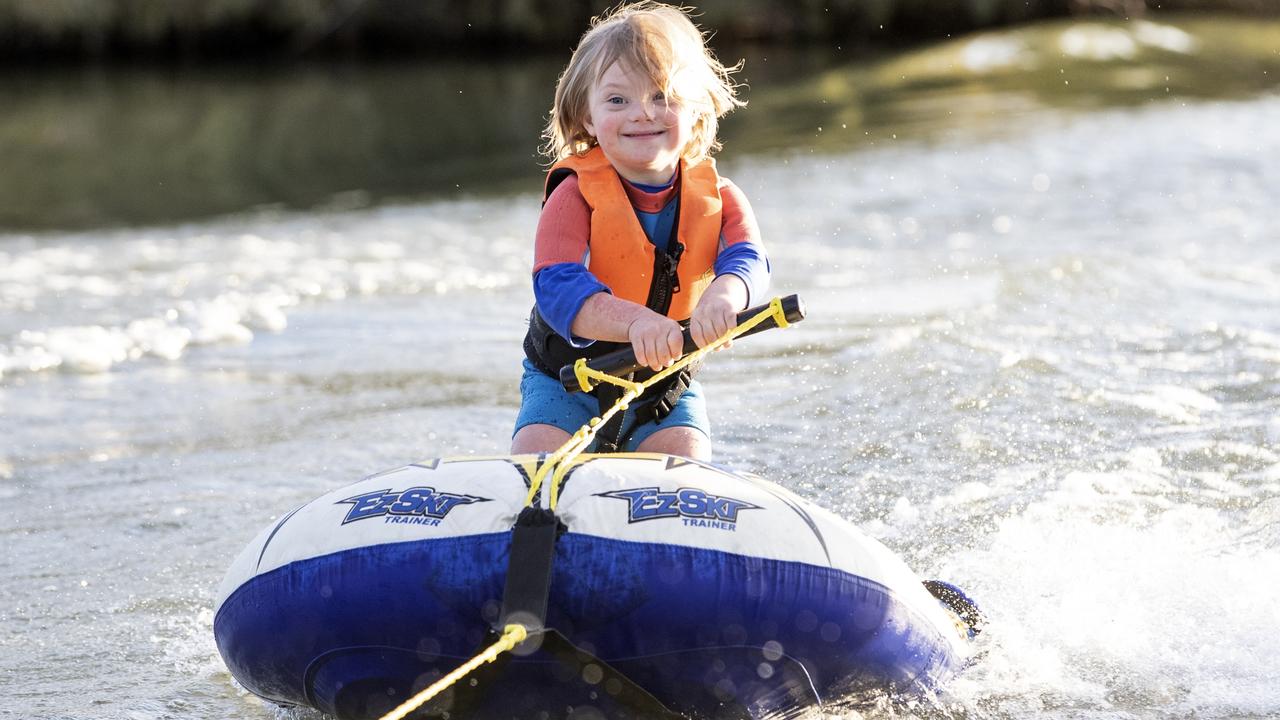 Mahala is tracking his distance, capturing his adventure on film and sharing it on social media to raise awareness of Down syndrome and funds for charities that support those living with it.

The young siblings also aim to produce a documentary at the journey’s end to share with schoolchildren, to spread the message about their little brother.

“We are trying to make people see Koa can do everything you can do … most of the time we don’t even notice he has (T21), apart from the times we celebrate it,” Mahala said.

“He loves to play on the playground and if we have our friends over he plays with us and is annoying like any (little) brother or sister. … some days he gets a Nutella jar and licks the lid,” Mahala said.

“The kids wanted to do it to demystify* T21 a bit and allow people to see a different perspective – not from a parent, not from a teacher but from a sibling,” he said.

Reef, who has so far completed 117km, said the 213km target was inspired by the genetic condition itself, to signify the uniqueness of the triplication (trisomy) of the 21st chromosome, so too the goal to raise $21,300 of which more than $10,000 has been raised so far.

Reef hadn’t skied before embarking* on this challenge, deciding on it after receiving a ski for his birthday in late January. As well as raising money and awareness for T21, the youngsters are hoping to raise money for Ski for Life, to support and promote mental health and wellbeing.

Meet Baby Charlie, the doll with Down syndrome

These kids rock their kitchen

CLASSROOM ACTIVITIES
1. See the Person not the Disability
Why do you think it is important to Reef to raise awareness that Down syndrome is not something to be ashamed of but rather celebrated?

How does it seem that Koa is treated within the Fahey family?

What could you do to ensure people with a disability feel included and are treated the same as everyone else?

What could the money Reef raises be used for?

If you have a person with a disability in your school, how could you ensure they feel and are treated the same as others?

How do you think the Ski for Life charity is aligned with their goal for raising awareness about Koa and Down syndrome?

2. Extension
Certain charities support children living with Down syndrome. Work with a partner and brainstorm the sort of help these children may need to ensure they live a happy, healthy, and active life.