A guard tower at the former Auschwitz concentration camp during the official ceremony to mark the 75th anniversary of the liberation of the camp on January 27, 2020 near Oswiecim, Poland. Picture: Getty Images

The Duchess of Cambridge has taken photographs of Holocaust* survivors in a moving tribute* to mark the 75th anniversary of the liberation* of World War II concentration camp Auschwitz.

One of Catherine’s two portraits, which were inspired by the work of Dutch painter Johannes Vermeer, was of 84-year-old Steven Frank, originally from Amsterdam, Netherlands, who survived multiple concentration camps as a child.

He is pictured alongside his granddaughters Maggie and Trixie Fleet, aged 15 and 13. Steven Frank, aged 84, originally from Amsterdam, who survived multiple concentration camps as a child, is pictured alongside his granddaughters Maggie and Trixie Fleet, aged 15 and 13. Picture: The Duchess of Cambridge via AP 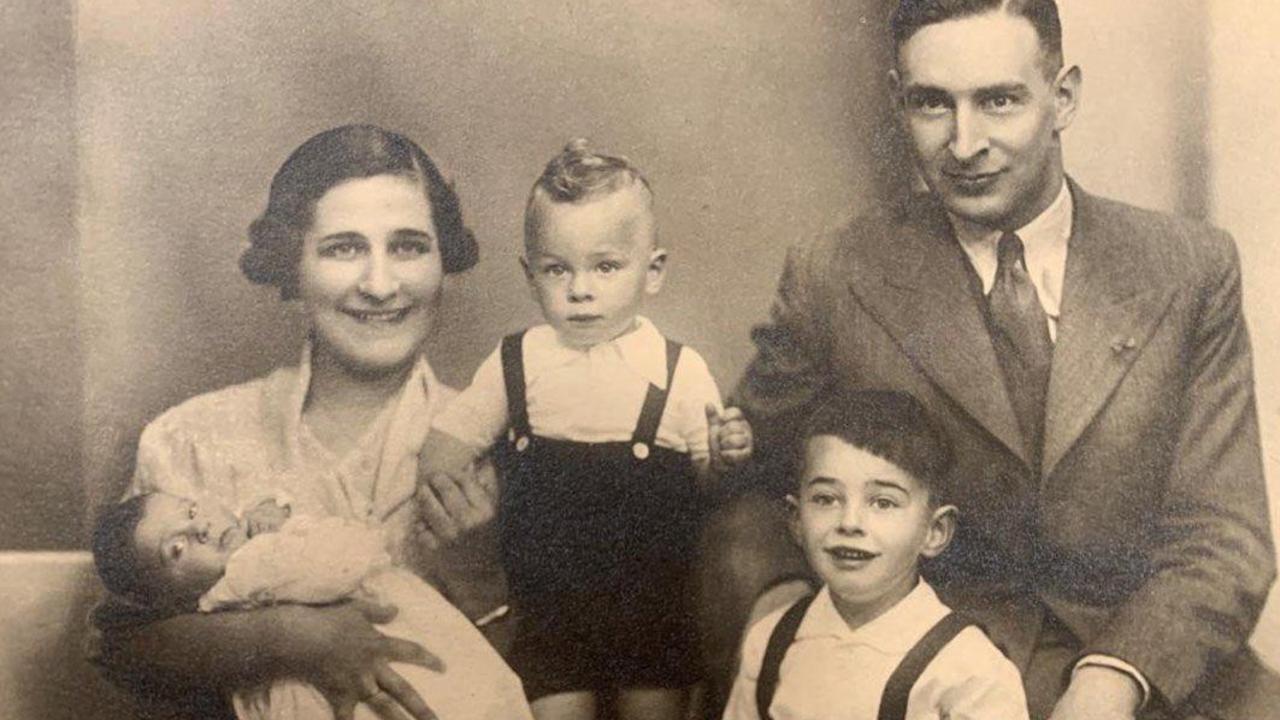 Catherine’s other portrait is of 82-year-old Yvonne Bernstein, originally from Germany, who was a hidden child in France throughout most of the Holocaust.

She is pictured with her granddaughter Chloe Wright, aged 11. Yvonne Bernstein, originally from Germany, who was a hidden child in France throughout most of the Holocaust, pictured with her granddaughter Chloe Wright, aged 11. Picture: The Duchess of Cambridge via AP

Speaking about the project, Catherine, who is the patron* of the Royal Photographic Society, said: “The harrowing* atrocities* of the Holocaust, which were caused by the most unthinkable evil, will forever lay heavy in our hearts.”

“Despite unbelievable trauma at the start of their lives, Yvonne Bernstein and Steven Frank are two of the most life-affirming* people that I have had the privilege to meet,” she added. “Their stories will stay with me forever.” The portraits will be part of an exhibition opening later this year, bringing together 75 powerful images of survivors and their family members to mark 75 years since the end of the Holocaust.

The project is a collaboration* between the Holocaust Memorial Day Trust, Jewish News and the Royal Photographic Society.

The Duchess said her aim was to make the portraits “deeply personal to Yvonne and Steven – a celebration of family and the life that they have built since they both arrived in Britain in the 1940s.

“It was a true honour to have been asked to participate in this project and I hope in some way Yvonne and Steven’s memories will be kept alive as they pass the baton to the next generation,” she said.

Seventy-five years after the liberation of Auschwitz, a dwindling* number of elderly Holocaust survivors gathered at the former German Nazi death camp on Monday to honour its over 1.1 million mostly Jewish victims. Holocaust survivor and former prisoner of Auschwitz, Miriam Ziegler (Friedman), is seen in Oswiecim, Poland on January 26, 2020, one day before the 75th anniversary of its liberation. Picture: AFP

More than 200 survivors travelled from around the world to share their testimony as a stark warning amid a recent surge of global anti-Semitic* attacks.

Australian Holocaust survivor Yvonne Engelman, 92, from Sydney, was flown to Poland for the event, along with her three children, nine grandchildren and 15 great-grandchildren.

“We want the next generation to know what we went through and that it should never happen again,” Auschwitz survivor David Marks, 93, told reporters at the former death camp, his voice breaking, heavy with emotion. Heads of state and survivors attend a candle lighting ceremony at the former German Nazi death camp Auschwitz during events to commemorate the 75th anniversary of the camp’s liberation in Oswiecim, Poland, on January 27, 2020. Picture: AFP

THE HOLOCAUST
The Holocaust was the World War II genocide* of European Jews in Germany and German-occupied countries.

Six million Jewish men, women and children and millions of other people were killed, many in camps known as concentration or death camps.

Auschwitz, also known as Auschwitz-Birkenau, is in southern Poland. Poland was occupied by Germany during World War II. Holocaust survivors walk below the gate with its inscription “Work sets you free” after a wreath laying at the death wall at the memorial site of the former German Nazi death camp Auschwitz during ceremonies on January 27, 2020. Picture: AFP

The camp opened in 1940 and was originally run as a detention centre for political prisoners of Germany but it evolved into a place that Jewish people and other perceived enemies of Nazi Germany were imprisoned, used as slave labour or killed.

The camp was liberated by Soviet soldiers on January 27, 1945. They found 7000 starving prisoners alive.

More than one million people died at the camp. The remains of the barracks and the main building of the Auschwitz-Birkenau camp in Oswiecim, Poland. Picture: AFP

Thousands of Jewish children survived the Holocaust because they were hidden, either by pretending they weren’t Jewish, or physically hidden out of sight in cramped and dangerous conditions — such as in cellars and attics — for years to avoid being sent to the camps.

CLASSROOM ACTIVITIES
1. Holocaust reflection
After reading this Kids News story and learning about the Auschwitz concentration camp and the terrible event in history known as the Holocaust, reflect on this reading and your thoughts by completing a drawing. Your drawing can use any medium (greylead, charcoal, texta, pencil, paint — whatever your classroom has available) and just be your reflection on these events. You could use symbols, words or just reflect by drawing whatever comes to mind.

2. Extension
Auschwitz survivor David Marks states in the article that “We want the next generation to know what we went through and that it should never happen again.”

Why is it important for these survivors to tell their story?

If this was your grandparent, what ways could you think of to ensure what they went through would never be forgotten?

HAVE YOUR SAY: What did you find most interesting about this story? How did it make you feel?
No one-word answers. Use full sentences to explain your thinking. No comments will be published until approved by editors.