Molly Wright’s presentation has had more than 8 million views on the TED Talk site and has led to an international parenting program. Picture: Adam Head

An Aussie schoolgirl who became the youngest person to give a TED Talk has had a massive global impact with her presentation on parenting.

Not only does Molly Wright’s TED Talk video rival presentations by Elon Musk and Bill Gates, but it has led to an international parenting program.

Molly was aged just seven when she gave her talk, Thrive by Five, in July last year.

Since her presentation about how parents and carers can better connect with children under the age of five, it’s been viewed more than 8 million times on the TED website and has reached more than 44 million people on Facebook.

The Queensland Year 3 student’s talk is also in the top five most viewed videos on TED’s social channels since January 2019, trailing only billionaire businessmen Elon Musk and Bill Gates. 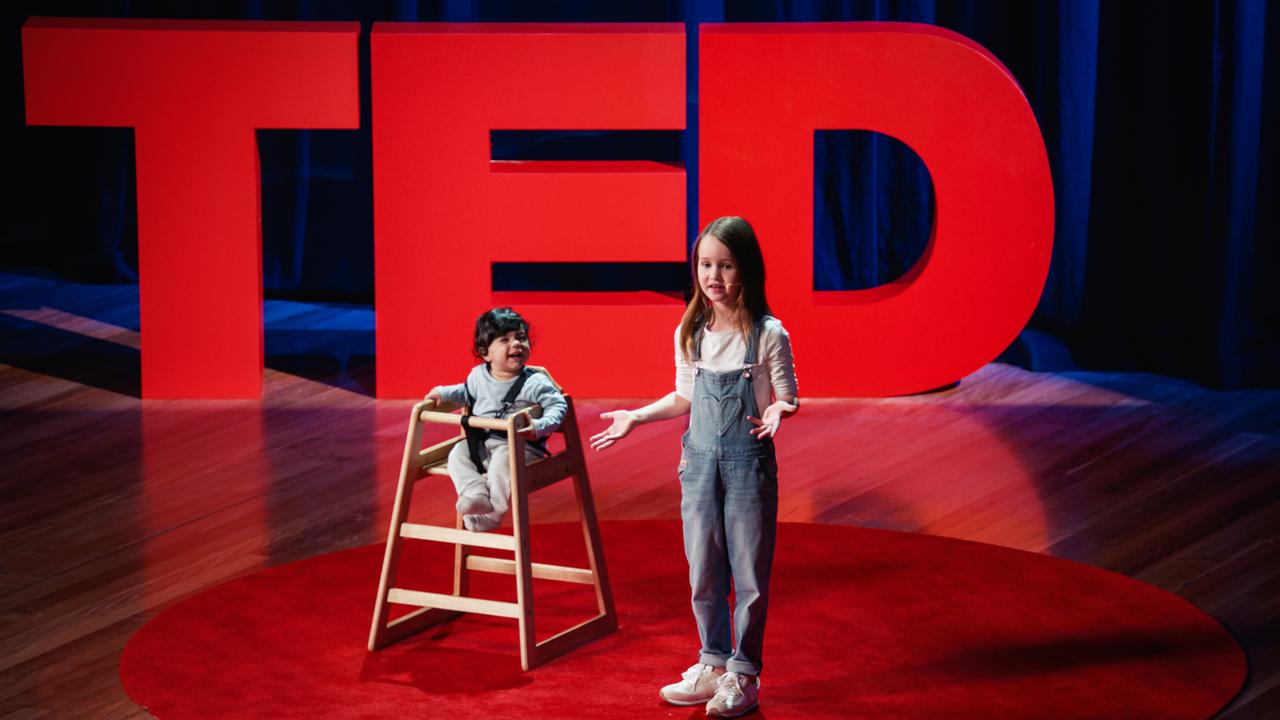 Now, thanks to the youngsters’ viral talk, the Thrive by Five program, in collaboration* with the University of Sydney Brain and Mind Centre, is rolling out in 30 countries including Afghanistan and Indonesia.

This year, the program is expected to launch in several countries in Africa, including Ethiopia, and Kenya, as well as in Uzbekistan, Kyrgyzstan and Malaysia.

“It’s amazing to see the impact the talk has had. It’s really special actually and this is what has made me want to share the message,” Molly said.

“They played my talk this week at school and it was both embarrassing but also a proud moment.”

Thrive by Five is backed by the Australian philanthropic* group Minderoo Foundation, run by Andrew and Nicola Forrest. Philanthropist Nicola Forrest says the Thrive by Five program will be rolled out in 30 countries. Picture: Gary Ramage

Leading philanthropist* and Minderoo Foundation co-chair Ms Forrest said the international program aimed to “pick up where the TED Talk ends”, encouraging greater parent-child interaction and supporting kids’ reading and writing development, often without the use of technology.

“We then validate* them again through our implementation partners* as well as parents and caregivers in each of the 30 countries that we’ll be launching in over the next three years.

“Only when we’re certain that the activities reflect the culture and traditional practices of each launch country, we roll them out via the Thrive by Five app, as well as via a multitude of other channels.” Molly has not shied away from the limelight in 2022, speaking out on topics of early education and wildlife as an ambassador* for the Currumbin Wildlife Hospital. She has raised more than $23,000 for the hospital.

“There’s so much pride in her face knowing she is making a difference,” said Molly’s mum, Ally Wright.

“Since giving her talk, she has only strived for the better and every day she has a desire to help.”

Some of world’s richest are also biggest givers

CLASSROOM ACTIVITIES
1. Relay Molly’s message
Watch Molly’s TED Talk and take note of the parts that you think are most important. Then, create a communication to new parents, giving them some advice about how to best make sure that their child will “Thrive by Five.”

2. Extension
If you could give an inspirational TED Talk, what would your message be? Explain what wisdom you would want the world to take from your talk and why your message is important.