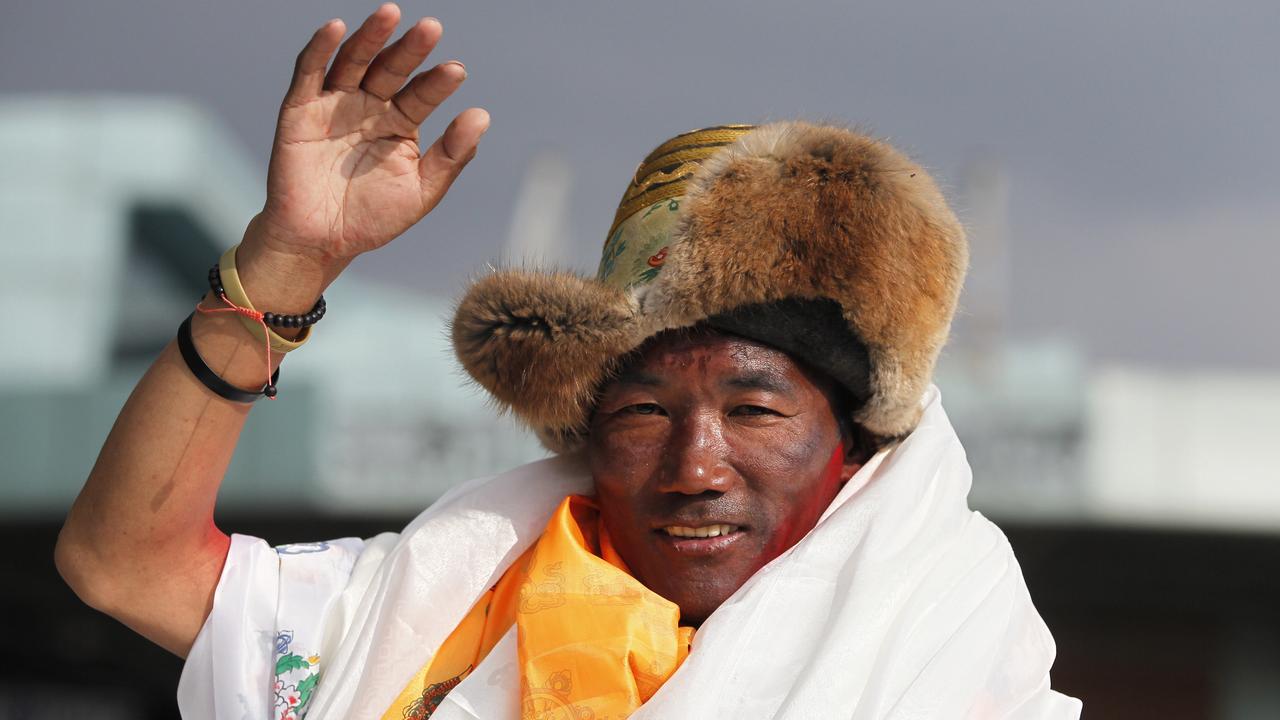 Mountaineer Kami Rita has summited* Mount Everest for a 23rd time, breaking his own record for the most successful climbs of the world’s highest peak.

Kami reached the summit* with other climbers at 7.50am on May 15 and all were reported to be safe, said Gyanendra Shrestha, a Nepalese government official at the mountain’s base camp. Kami Rita at the top of Mount Everest on May 15 after summiting it for the 23rd time. Picture: AFP/Seven Summit Treks

The two climbers closest to Kami’s record have climbed the 8850m peak 21 times each, but both have retired from mountain climbing.

“It is my profession, but at the same time I am setting new world record for Nepal too,” said Kami (who goes by his first name only) before leaving for this summit attempt.

Kami, who is 49, is a Nepalese Sherpa, one of the indigenous peoples of the mountains of Nepal and the Himalayas. His home village of Thame is in the shadow of the mountain.

He first summited Everest in 1994 and has been making the trip nearly every year since, one of many Sherpa guides whose knowledge, experience and skills are vital* to the safety and success of the hundreds of climbers who head to Nepal each year seeking to stand on top of the world.

His father was among the first Sherpa guides employed to help climbers reach the summit and Kami followed in his footsteps.

In addition to his 23 summits of Everest, Kami has summited several other peaks in the Himalayas that are among the world’s highest, including K-2, Cho-Oyu, Manaslu and Lhotse.

Kami was at Everest base camp in 2015 when an avalanche* swept through, killing 19 people. After that tragedy, he came under intense family pressure to quit mountaineering altogether, but in the end decided against it.

“I know Mount Everest very well, having climbed it 22 times, but at the same time I know I may or may not come back,” he told news agency The Associated Press (AP) last month. “I am like a soldier who leaves behind their wives, children and family to battle for the pride of the country.”

Kami has been an advocate* for other Sherpa guides, who he said do not get the recognition they deserve.

WHAT SHERPAS DO
This Himalayan spring, 41 teams of a total of 378 climbers (who are not Sherpas) have permits to attempt to summit Everest. There is an equal number of Sherpa guides helping them.

Kami said that before climbers from around the world arrive to attempt to reach the summit there are months of hard preparation work done by Sherpas. The Sherpas are the ones who take care of setting up the camps, carrying the loads on their backs, cooking food and carrying oxygen tanks. 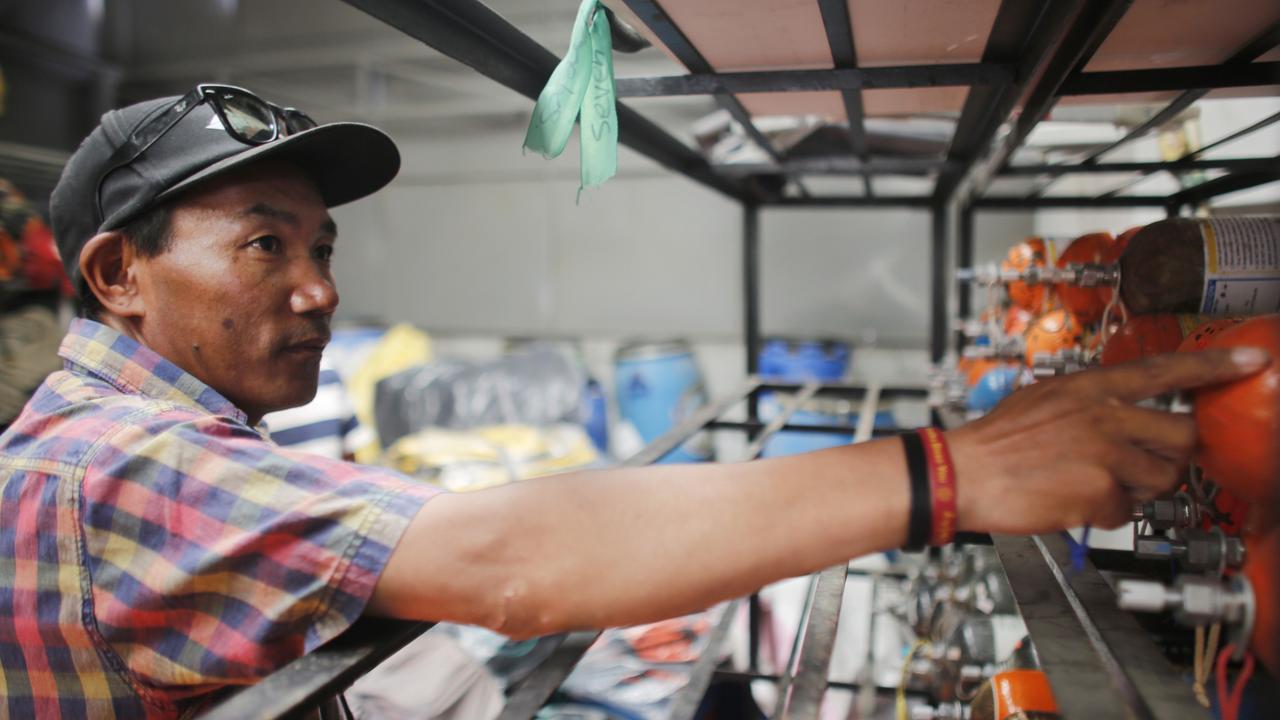 Kami Rita checking oxygen tanks and other supplies on April 4 before his 23rd summit. Picture: AP

Perhaps most important, it is Sherpas who each year fix ropes and ladders over crevasses* and icefalls that make things safer for the hundreds of climbers who will follow them.

“However, when these climbers reach the summit, only their names are highlighted and nothing mentioned about the hard work done by the Sherpas,” Kami said last month. Sherpa Kami Rita in Kathmandu, Nepal, talking about the important work his people do helping keep other climbers safe on attempts to summit Everest. Picture: AP

Sherpa people were mostly yak herders and traders living deep within the Himalayas until Nepal opened its borders to visitors in the 1950s. Their stamina* and familiarity with the mountains quickly made them sought-after guides and porters.

On Tuesday last week, it was a team of Sherpa guides who again were the first to reach Everest’s summit this year, completing their advanced work of setting up ropes and lines for the other climbers to follow.

Doing this work as quickly and as early as possible is important to the success of the climbing season. Each May, there are usually only a few short periods of good weather near the summit during which climbers can attempt to get to the top. 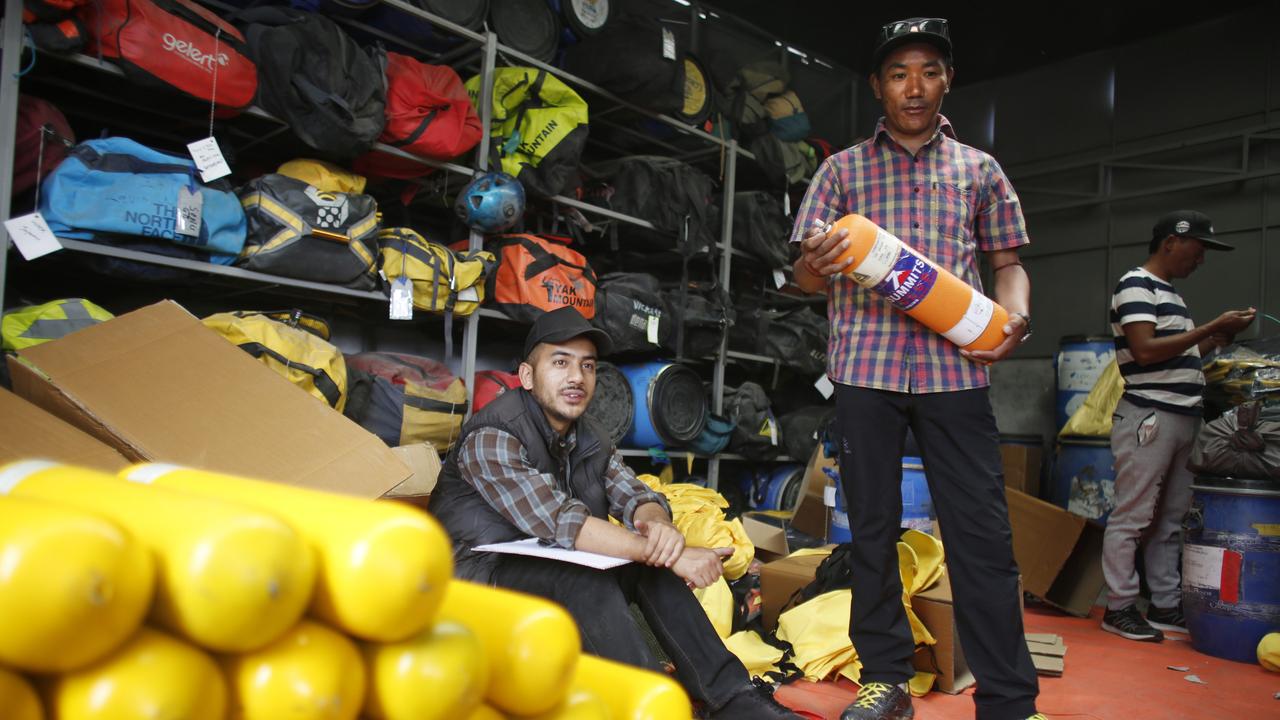 Kami Rita and another mountaineering guide checking equipment in April before this season’s successful climb. Many months of work goes into preparing equipment and the route for each group that attempts to summit Everest. Picture: AP

THE HIMALAYAS
The Himalayas is a 2400km-long mountain range in Asia that has 30 of the Earth’s highest peaks.

It runs along the borders between Nepal, Tibet (part of China), Bhutan, India and Pakistan.

The highest point on Earth is Everest at 8850m. Mount Everest in the Himalayas.

Next highest is another Himalayan mountain we call K2 (other countries have other names), at 8611m. K2 is considered more difficult to climb than Everest, partly because it has severe and frequent storms.

CLASSROOM ACTIVITIES
1. Sherpa wanted
Write a job advertisement looking for a Sherpa. Your advertisement should include the tasks required (which you will find in the article) and a list of desired skills and attributes (which will require a little more thinking). Keep your job advertisement concise by limiting it to a maximum of 100 words.

2. Extension
Look at the skills and attributes you have listed in your Sherpa job advertisement. Can you think of any other careers that Sherpas might be suited to? Make a list.

VCOP ACTIVITY
Oh what a feeling!

Imagine climbing to the summit of the highest mountain in the world. What an experience … and then to do it 23 times. My goodness.

I bet Kami has been asked a million times “What’s it like?”. Well it’s your turn to try and explain, but you have to use the Show don’t tell technique. Instead of telling the readers “it was amazing” explore words through your senses to show it instead.

HAVE YOUR SAY: Would you like to climb Everest? What would you most like? What wouldn’t you like?
No one-word answers. Use full sentences to explain your thinking. No comments will be published until approved by editors.