Kane Tanaka at the celebration of her official world record on March 9. Picture: AFP

A 116-year-old woman who studies maths and loves playing the board game Othello has been honoured by Guinness World Records as the world’s oldest living person.

Guinness World Records officially recognised Mrs Tanaka in a ceremony at the nursing home where she lives in Fukuoka, in Japan’s southwest.

Her family and the mayor* were present to celebrate.

Mrs Tanaka was born on January 2, 1903, the seventh among eight children.

She married Hideo Tanaka in 1922 at the age of 19. As was common at the time, the families arranged the marriage and Kane and Hideo didn’t meet before their wedding day.

They had four children and adopted another child. When her husband became a soldier in 1937, Mrs Tanaka took over the family business, which sold sticky rice, Japanese sweets called zenzai and udon noodles.

Though she is now retired, she still gets up by 6am and studies maths and other subjects. She often beats the nursing home staff at the strategy board game Othello.

During the world record presentation, Mrs Tanaka was given chocolates, which she began to eat. When she was asked how many chocolates she wanted to eat that day, she replied: “100”. 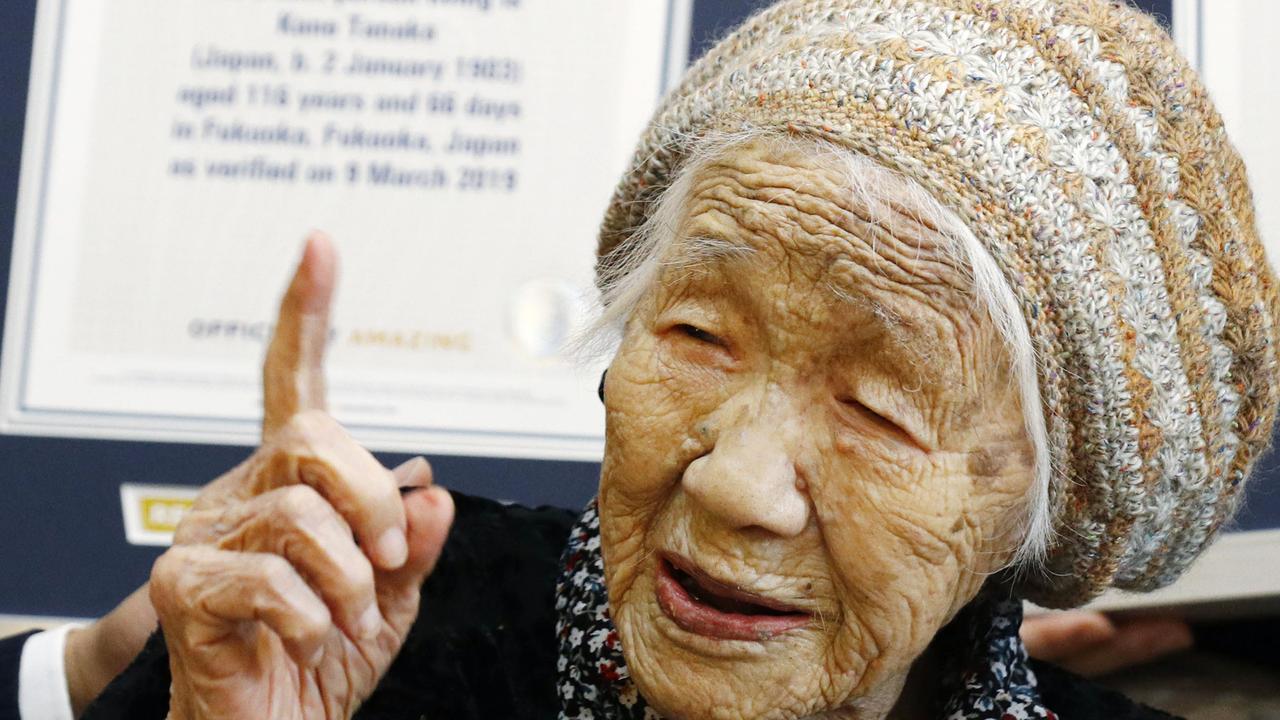 Kane Tanaka talking to guests at the presentation of her Guinness World Records certificate. Picture: AFP

THE WORLD IN 1903
The world was a very different place when Kane Tanaka was born in 1903.

World War I and World War II, the Great Depression*, the moon landing and inventions such as TV, internet, mobile phones and satellites were still in the future.

In 1903, US businessman Henry Ford started the Ford Motor Co. with the aim of mass-producing cars. The few cars that existed at that time were individually made experimental projects. German Reinhold Burger launched a “vacuum flask for keeping liquids hot or cold,” which came to be called a Thermos.

The world’s first feature film, The Great Train Robbery, launched. It was a 10-minute, silent movie with a plot.

LONG LIVES IN JAPAN
The previous oldest living person was another Japanese woman, Chiyo Miyako, who died in July 2018 at age 117. The oldest person prior to Miyako was also Japanese. Japanese people dominate the oldest-person list.

Age is also respected in Japanese culture, meaning people stay active and feel useful into their 80s and beyond.

Guineas World Records is currently investigating who the world’s oldest man is after the death in January of Masaka Nonaka. Mr Nonaka was 113 and lived on the Japanese island of Hokkaido.

OLDEST PERSON EVER
The oldest person ever recorded was French woman, Jeanne Louise Calment, who lived to 122 years, according to Guinness World Records. Jeanne Calment in 1996 at celebrations for her 121st birthday. Picture: AFP

CLASSROOM ACTIVITIES
1. Create a timeline
Kane Tanaka would have seen and heard about a lot in her 116 years.

Create a timeline to show some of the major events that have happened in her life.

Draw a line across the middle of an A3 page and mark one end 1900 and the other end 2025. Decide on a scale that will allow you to place 116 years’ worth of events as clearly as possible.

Begin by marking when Kane Tanaka was born and when she was awarded this world record. Read the article to find events of personal significance to her and some of the other world events that she would experience in her life. Mark each of the events mentioned and write in parenthesis ( ) how old she would have been at the time. You may need to research when these things occurred.

2. Extension
Include other events significant to Japan on the timeline. Remember to mark how old she was when these events occurred. Some examples include:

When women got the right to vote in Japan

HAVE YOUR SAY: How would you like to spend your days if you were 116 years old?
No one-word answers. Use full sentences to explain your thinking. Comments will not show until approved by editors.